“It certainly has been a week!”

I’m not real sure who said that to me yesterday. I think it was K-man's “Grandpa-Roy”. I totally, most heartily concur. Because what else can you say? 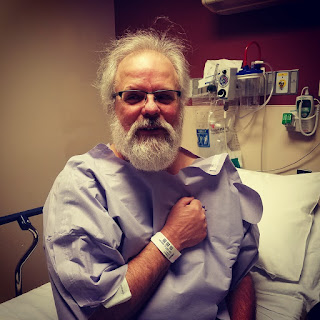 From the time the medical center called early Tuesday morning saying they had a cancellation and if we got there sooner than scheduled, they’d get us right in…the week took off with a mind of its own.

Naively, we thought that sooner meant quicker. I mean, a 4-hour surgery…surely the Boss would be in a room by afternoon and I could come home and do chores. Right? Most definitely wrong.

It was 9:30pm before he got to a room. Then the round of doctors, nurses and PCAs went all night.

It was 6am before I headed back to the hill.

The surgery went well. The doctor (and his team) were pleased. They got the entire tumor and we will find out next week what the pathology report says. As it stands, the Boss does not have to face any further treatment.

But, as a reminder to him (and an explanation to you) it was indeed MAJOR surgery. They had to cut through the rectus abdominus which is a really big muscle that is involved in a LOT of everyday movement. And, according to the Boss, it “hurts like hell”. He rarely cusses, so that expression alone should give you a clue as to the severity of the pain. They moved all his insides around, so there's still lots of swelling and discomfort as well as the pain from the gigantic incision.

When I came back Wednesday morning, it was to do chores and pick up broiler batch #2. Bad timing on the chickens…but, plans had been made prior to scheduling surgery, so we will just muddle through. The Post Office called while I was feeding the sheep and required a trip to Staunton, so I wimped out on the drive to C’ville for the day and had the kids take me and bring me home. Again…thanks! (we’ve got great kids)

I know that a lot of you think that we can just take a vacation or find someone to “baby-sit” things for us…one of these days I will find the time to tell you how that is a virtual impossibility. And, it is not because I’m stubborn or incredibly hard-working…

Back at the hospital…

It amazes me that the human body responds to such invasive surgery in such a positive way. By Thursday he was up walking with assistance. By Friday, he had lost most of the IVs and was walking on his own. On Saturday morning, they brought him solid food and mentioned discharge…

Saturday was also Kman’s second birthday party. On my way to the party, the Boss called me. He was going home! They were going to release him at three…but, you know how that goes…

He wanted me to go to the party for a while.

I said HAPPY Birthday to the birthday boy, hugged a few family members, snuggled one of the new babies and then it was time to hit the road again.

I was nowhere near the hospital when the Boss called. They were releasing him RIGHT now! Please hurry…well, don’t hurry…but, come on.

If anyone doubted that they would release him at 3 o’clock…I took that picture at 3:09pm.

He was elated to get in the car and head home.

However, the drive over the mountain is far more difficult when you’re in pain than you ever think it should be. But, he’s HOME!

He wants me to thank everyone for him…from the bottom of his heart, he says. I’m sure when he’s feeling stronger, he will post something himself.

It has most definitely been A WEEK. I had a lot of things I wanted to write about.

We missed Ag day. You can read this old post.

I wanted to write about Thomas Jefferson…and UVA…and the Market (which starts SATURDAY)…and a bunch of other things…but, maybe some other time…

It is very easy when you’re in the midst of your own dramatic life event to become truly insular and not notice anything around you. Although, UVA is teeming with other folks who all have their own struggles. When you stop and consider all the suffering and worry that is going on around you, it’s more than a little humbling to know that so many folks are worried about YOU. In our short hospital stay, I caught up with 3 acquaintances who are going through their own serious health struggles. One included a trip in the NETs (Newborn Emergency Transport Service) from Harrisonburg for one of our Market vendor’s newborn twin sons. The babies were taken to Neonatal Intensive Care, where one is doing quite well. The littler baby is worrying everyone. And, Mom is staying in C’ville while Dad goes back home. So, you may want to say a prayer or ten for the Shirk family as they struggle to take care of children at home and worry over a critically ill newborn. Somehow, knowing that others are even more needy puts our own situation in perspective for me.

And, in closing, THANK YOU…many of you have messaged, called and just reached out to us and we truly appreciate it.  We have heard from friends from all over the world. And, to my own friends who are concerned specifically with my concerns, I love you ladies! All y'all are awesome!

As the doctor said, for a bad situation…this has been the best possible scenario… 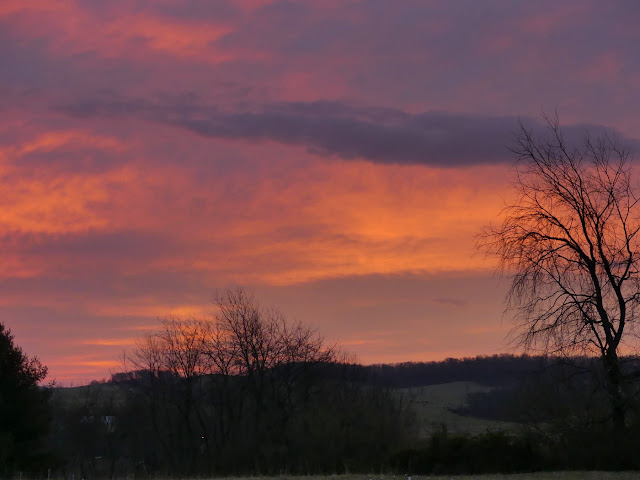 Thanks for stopping by. I hope you’ll come “visit” again real soon. (and I hope to actually have farm news next time)

Right now, I’m off to town in hopes of getting his pain prescription filled. Wish me luck!