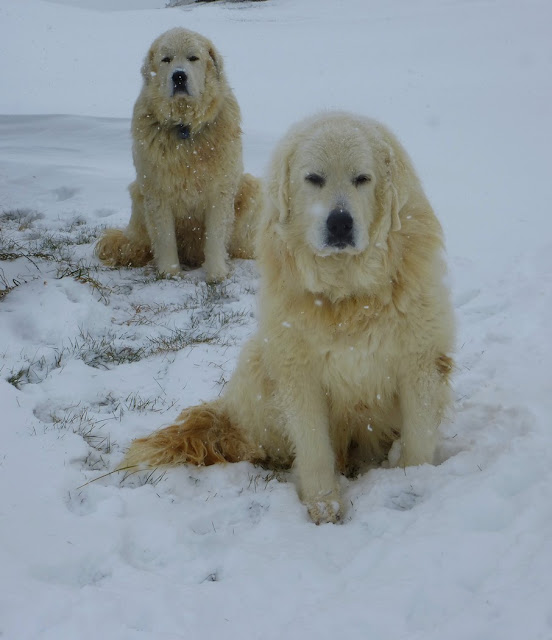 But, we got through it and it’s time for our little Sunday “farm tour”. Wait, it is Sunday, right? I lost track somewhere this week.

Somewhere at the beginning of the week, the Boss discovered that the tractor had a flat. No big deal...put some air in, right? Wrong. He had solved the problem like that many times in the past. This time, he would need a new tire. A new tire meant a roadtrip of sorts. But, there were a number of other things to do... But, there was a big snowstorm threatening, he decided not to wait.

That was a good decision. The repair shop guys were full of stories about how crazy it would be the day before the storm as everyone decided to get “prepared” at the last minute. And, we had far more jobs that required the tractor than we originally thought.

Despite the bitter cold, the Farmers’ Market meeting went off without a hitch. It was encouraging to see that there are some new faces for this season. Now the countdown to Market has begun (if only in my mind). Opening Day April 2 is right around the corner! 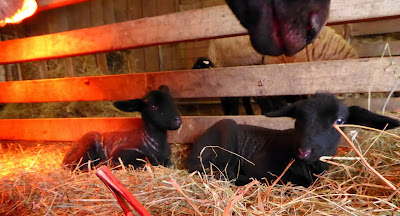 After the meeting, I headed to the barn to check on the bottle babies (fine) and the ewe due to lamb. She was looking like delivery was imminent. By midnight, we had two nice lambs. These were the first of the “Angus” lambs, so it was rather exciting.

The next couple of days were filled with storm preparations as the predicted totals got higher and higher. Blizzard warnings went up and it looked like things were shaping up for an historic event.
Wednesday, we went ahead and cancelled sales for the week. At that point, we hadn’t seen a snowflake and I’m pretty sure that our decision looked rash. By cancelling sales, we effectively cancelled any earnings for the week. That’s a hard choice to make. What if the forecast was totally wrong? We would just have to live with our decision.

The snow began in earnest around 8am on Friday.

With the first snowflake came evidence that more lambs were arriving. They say “when the barometer drops, the babies pop.” (or something like that) By the time I got back from the house with my lambing supplies, another set of twins had been born. Mama was cleaning them up and they were looking for a meal. Yay! That’s the way to do it!  Thankfully, those were the only possible additions until after the impending storm.

Once they were situated in a jug, I headed back to the house for bottles for the other babies. The day was going to be spent going back and forth, through the snowflakes, checking on my small, woolly charges...

Of the new set of twins, one was enormous...possibly over 12 pounds and the other one was teeny, tiny...maybe 7 pounds (probably less). That occasionally happens with twins. While they’re inside, I guess one gets more of the mother’s nutrients. It is a situation to be aware of, as the bigger, stronger twin will dominate the food supply.

It was really hard to get the new twins dry and warm (the snow and wind were picking up in intensity and while we were in the barn...it’s not the tightest, warmest spot on the farm) I put little sweaters on the newborns and gave them a nutrient drench and a shot of selenium, hoping to give them a good start on life. I was certain they knew how to nurse their mother and saw that they had had at least a sip of her life-saving colostrum.

But, on my next trip to feed the bottle babies and I could hear lamb cries outside the barn. The tiny lamb was protesting loudly and wandering all around the jug. When I offered her a bottle, she drained it dry. Well, that was good...in a good news (she’s getting nourishment) bad news (another bottle baby?) Now, honestly, I didn’t want to co-parent the first lambs, I certainly don’t need another one. But, she was so tiny and big brother was doing his best to drain momma-sheep dry. So, I added bottle #3 to my coveralls. Momma-sheep didn’t seem to mind the help. She was still taking care of the baby, then she licked my hair and bit the bottle. (I think she even drank some of the milk...although I have no idea why)

The snow was coming down fast and furious. Each trip to the barn I swept the back porch clean...and on the return trip, I needed to do it again. I thought (erroneously) that I could keep a path clear to the barn by simply clearing it on each trip. This only worked for about two trips and then I had to admit defeat and just slog through the snow each trip. By afternoon chores, the snow was almost up to my knees.

The Boss made a path with the snowblower before he headed out to push snow for the neighbor who has a VDOT contract to keep Augusta County roads clear. They spent all night going up and down Mbrk Road to the Rockbridge County line, working hard to keep that 25 miles of roadway passable.

That made for a very odd night. I was all alone here on the hill, trudging back and forth to the barn in the dark and swirling snow. He was out on the road, driving through the dark and swirling snow. Honestly, I was quite relieved when I heard the dogs barking at some “stranger” slogging through the waist-deep snow in the driveway. The Boss was back!

While he tried to get some sleep, I headed out to do morning chores. The snowfall had lessened, but the wind had kicked up. Any and all paths had been obliterated by the swirling, blowing snow. Even the dogs seemed a little overwhelmed.

Chores seemed to take forever. Between the extra encumbrance of coveralls, boots and coat and the deep snow, I certainly got a work-out before breakfast.

There was snow INSIDE the brooder house (it blew in the crack around the door). There were starlings INSIDE the henhouse (I guess they were looking for food and shelter). But, the wind had scoured the area around the henhouse clean, so the hens could come outside (once it stopped snowing)  Angus was looking quite comfortable, tucked in his little ram shed eating all the straw we put in for bedding. The ewes seemed quite disgusted that they were confined to the barn and limited to hay. But, a quick glance out the back of the barn revealed drifts over two feet high in places and no way to get to the feed corral. Their breakfast would have to wait. But, all the babies were looking good!

Since the Boss found it impossible to sleep, he used the snowblower to make paths to all the necessary spots. This was going to make feeding the animals MUCH easier. 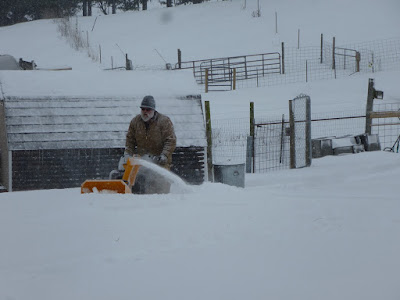 I cleared the sheep feeders and finally let the sheep out of the barn. They all galloped headlong into the deep snow and one lamb was completely covered. Once the excitement died down, they went back to eating hay in the barn. 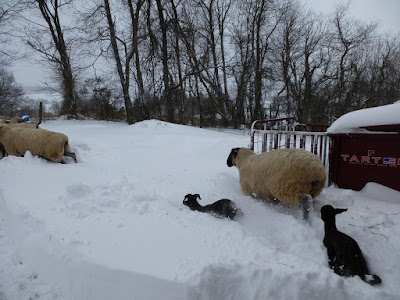 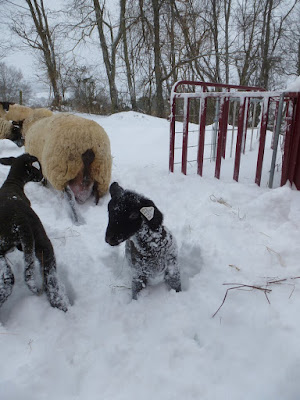 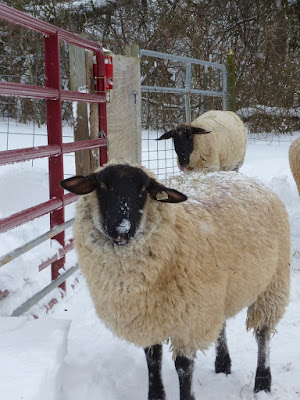 Although, I did manage to leave the gate opened and the Boss had to herd sheep back in the barn later in the day.

The snow ended before suppertime and some forecasters lamented the fact that the totals weren’t all they had predicted. There were complaints about a “busted” forecast. Seriously? 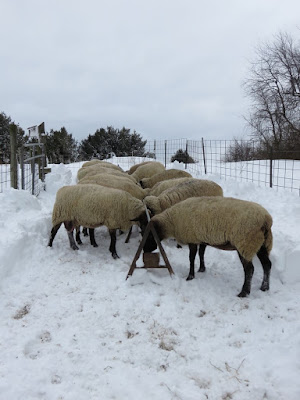 We ended up with somewhere over 16 inches. There are drifts in excess of 36 inches.  I think the official tally for Staunton was 20 inches. Nothing like the 3 feet or more that had made the news earlier in the week! Personally, I’m glad. There will be enough clean-up involved in this. More would have been completely catastrophic.  The folks further North got a lot more and had the wind to contend with as well. There was serious flooding and reports of all sorts of hardships, even deaths.
http://www.usatoday.com/story/news/nation/2016/01/24/blizzard-2106-everything-you-need-know/79259422/ 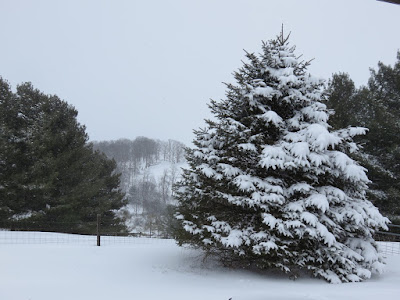 With Winter Storm Jonas behind us... it’s now a matter of the clean-up. There are trucks and plows and tractors working non-stop in the area to get the roads clear once more. I’m glad we made an extra trip for feed, because I don’t know when we will get back to town. (the Boss says we can go any time...I’m not so sure...) Today the Boss is using the tractor to clear paths for the vehicles. I will be spending some quality time with a snow shovel, working my way to the greenhouses.

The upcoming week will be all about clean-up. I think the Boss is going to join the road-cleaning crew again...#1daughter/SiL and the Kman are moving to a new house...and there are more lambs coming... It should be anything but DULL around here!

Have a  Happy Sunday!