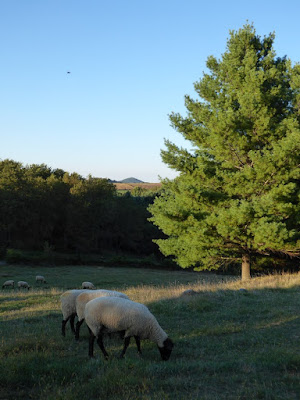 The past 155 days have been a long and arduous struggle in my life as a shepherd.

I have worried (far more than I care to admit). I have prayed (almost constantly it seemed).

I tried not to think about it.

But, found myself worrying some more. I even wrote that shepherding is the HARDEST thing.

Believe me, I’d like to. But, that’s just not the way I function. That’s just not how I am. While I don’t really enjoy the worrying, honestly, I find that it makes me far more appreciative of the successes. It makes me more aware of all the nuances of the situation and more open to creative solutions.

However, this particular struggle is history. 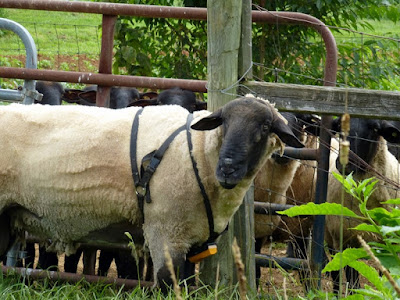 It was just 155 days ago that I first noticed that Waylon-the ram was limping. It wasn’t the ordinary stone in the hoof kind of limp. There was something particularly odd about that limp. It gave me a strange feeling in the pit of my stomach. As the limp got worse, the strange feeling turned into a full-blown worry.

When he finally laid down in a rather dejected heap, completely uninterested in all the specimens of feminine ovine loveliness surrounding him, I lost it. For a ram to lose interest during breeding season is unheard of.  Whatever it was had to be serious.

I could find nothing wrong. None of our “go-to” treatments had any effect.

What WERE we going to do?

I think I have related just how very important a ram is to a shepherd. Right? We’re talking potentially half the flock. HALF.

Not to mention the fact that lamb makes up a good portion of our own menu throughout the year. Without plenty of meat in the freezer, we would be looking at more grocery shopping and a further outlay of cash.

To complicate things further, there is a set window for breeding. Sheep will only breed at certain times of the year. And, if you miss that window, you must wait until the following year. Not a few months…a whole year.

So…a lame/sick ram is a major deal. This could indeed be devastating.

You don’t just run out to Rent-a-Ram when you need a breeder. And, Amazon doesn’t stock rams. (now, that would be worth the price of Prime, I tell you what) The options are limited, to say the least.

Since it was indeed breeding season, the rams around the area were already occupied. Maybe we could wait until they were done, “borrow” one and get a late start?  (remember that breeding window…it’s pretty short) Then, there’s the whole issue of bio-security…

Maybe there was one in the paper…Craigslist…wouldn’t any old “guy sheep” do?

Well, here’s the thing…we have worked hard for years to get our sheep genetics consistent so that the lambs are all quite similar. Our lamb chops need to be the same quality all the time. If we just bought some bargain basement dude-sheep to make babies, we might get something good and we might…not. (believe me, we have certainly been there, done that one!)  So, I’m more than a little picky. (and rightfully so)

The Boss called around to our few shepherd-friends. Nothing.

But, they had a couple of suggestions.

What about the ram sale at VATech?

And, just how much was solving this problem going to cost us?

WHAT are we going to do? I had given up trying to think about anything else.

When the Boss called Suffangus Farm, I was trying to reconcile myself to the fact that we might not have any lambs for 2016.

Imagine my surprise when he got off the phone and said we were going THAT afternoon to take our choice of THREE different rams!

Long story, short…we got a new ram. He joined the flock as “Angus”. 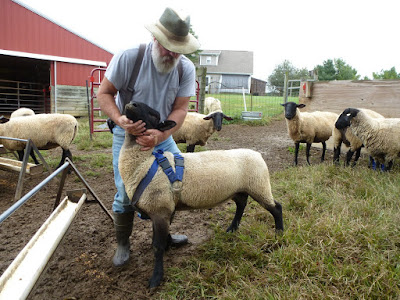 But, the new ram was quite young, he was still small. Compared to some of our big girls, he looked like a baby. As a young ram, he had no experience. That might makes things a bit of a challenge. We could only hope that instinct would kick in quickly. Oh….

And, I was off and worrying again.

He was a quick study. He figured it out and completed the task at hand.

So, what’s the problem?

You see, a ram will only mate with a ewe when the ewe is in estrus and ready to be bred. (no recreational procreation in the ovine world) That should be the only day that the ram will be “with” that ewe. If that one time is successful, the ewe will not cycle again. And, the ram will show no interest in her. That’s part of the reason we change the ram marker color. More than one color and we know it isn’t working.

We know all too well about how very wrong this all-natural activity can go. Once, a long time ago, we had a ram that had an undetected breeding “issue”, he marked those girls every single time…and nothing happened. We had a Technicolor flock and no lambs. Not good, I assure you.

So, when a couple of girls got marked for the second time, even the Boss started to worry. The ram was young, the ewes were young, so it was certainly understandable. So, we waited...until the next possible time. No more marks. We let out a collective sigh of relief.

It became apparent that despite the major upset in scheduling, despite my worries and despite the odds...that all the ewes were bred. (well, there’s one that remains questionable)  It would just be matter of time.

And, that’s where 155 days come in. That’s the length of this saga.

We turned “Angus” in with the girls just 149 days ago.

Gestation for a sheep is somewhere between 145 and 153 days.

Final countdown had begun. We would finally see just how this one played out.

And, Tuesday night (on day 147), just before midnight...the first lamb arrived. He was a big, beautiful ram lamb. When I got there, he was nearly dry and trying to stand. Since he was a real big boy, I figured he would be the only one. As I tried to reconcile myself to yet another single birth, (twins are our preference) his sibling made her appearance. 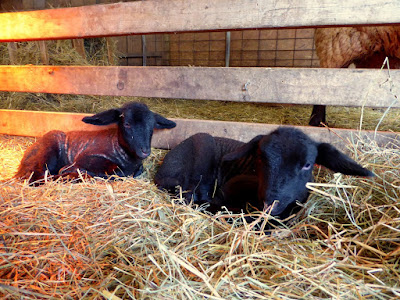 ...and there are more to come.

It’s obvious that “Angus” knows how to "do his job" and his genetics show in the lambs. And, it looks like the whole scheduling snafu is going to be a good thing (we’re facing a huge snow storm).Yet another case of  "all things work together for good..."

Guess I can stop worrying now. Nah, that will never happen. Even if I try.

Looking back, those 155 days of worry really don't seem that long after all!