“Expect the un-expected” could have, maybe SHOULD have been the motto for the past week.

Monday marked our 18th anniversary as owners of the hill. I meant to write a commemorative post, but realized I already had. You should read this one about "living the dream".

But, at some point, somehow, we totally lost control of events and we’ve just been “flying by the seat of our pants” for the better part of the week. This is certainly not how I feel comfortable….but, “whatcha gonna do?” 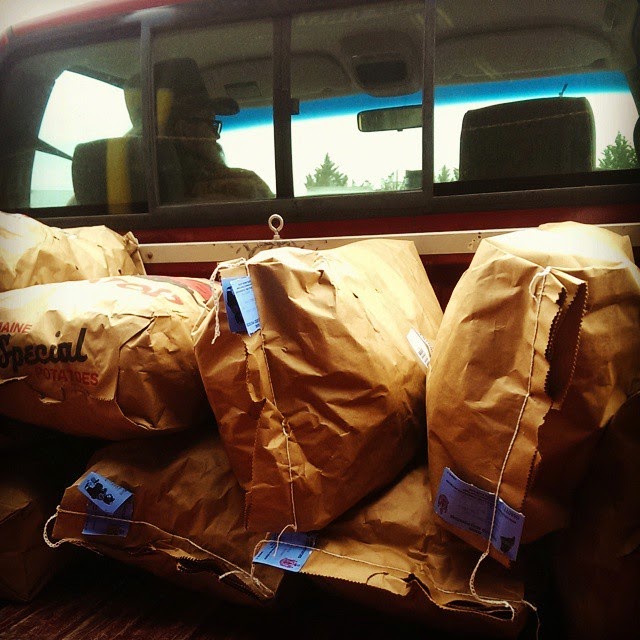 On Monday, we finally got to pick up the seed potatoes…after nearly a month’s delay. Only to find we could have gotten them considerably cheaper through a different source…and that there was some cold, cold weather coming so we wouldn’t be able to plant them anyway.  No matter…they are safely stored here on the hill and we can work at getting them in the ground as soon as conditions are right.

No sooner had we gotten back from that errand than the phone rang.

Now, I’d been waiting for the phone to ring for quite a while…(we’ve been anticipating the appearance of #1 Grandbaby) but, it wasn’t the landline, or my phone…it was the Boss’ cell.  …and it took me three tries to figure out how to answer the blasted thing…only to hear a rather befuddled voice on the other end identifying himself as the Staunton Post Office. I didn’t even have to listen to the rest of the conversation to know that any plans I had for the afternoon had changed again. The next batch of chicks had arrived (a day early and at a different post office) and I was going on a little roadtrip. 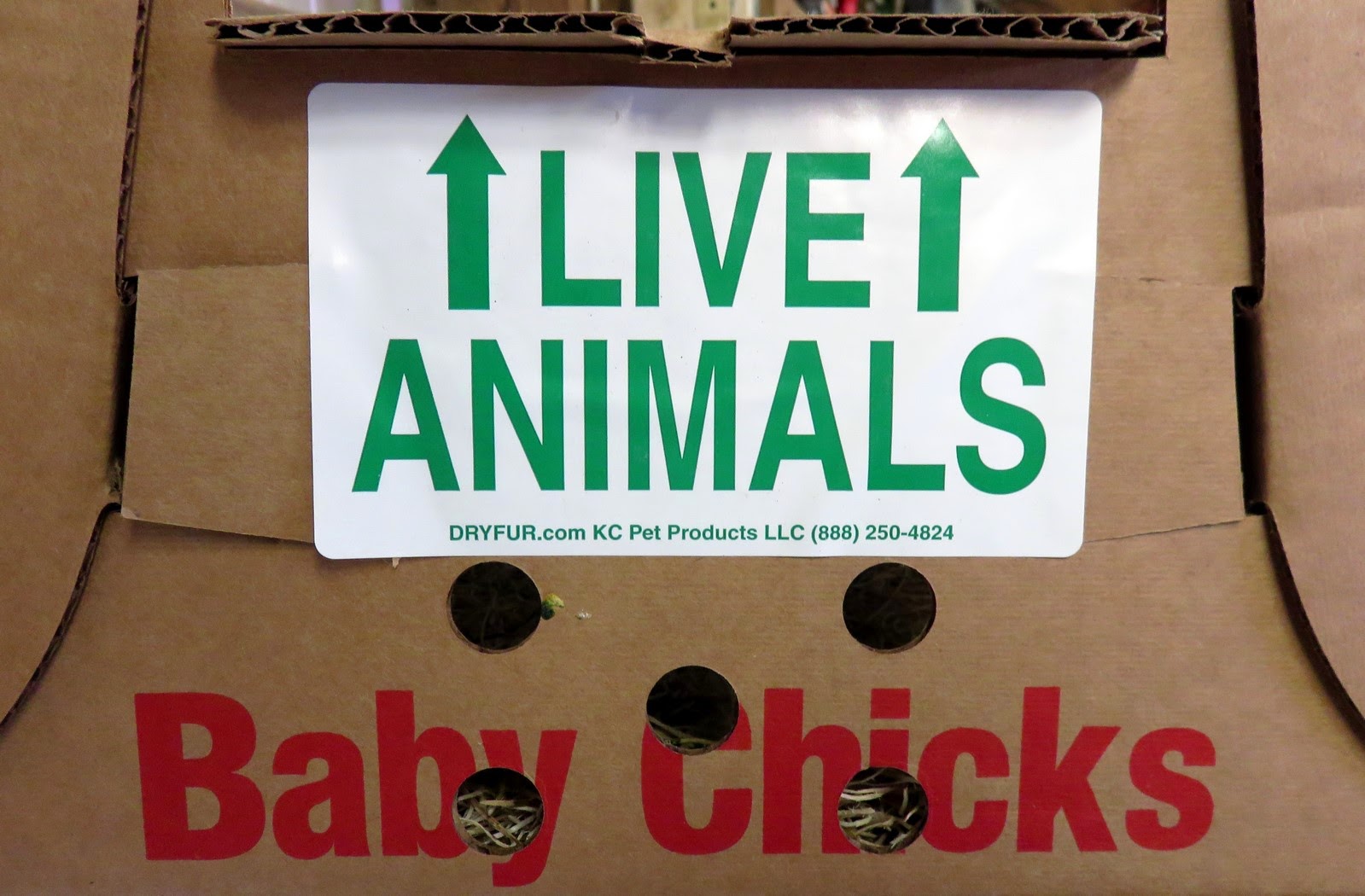 The brooder wasn’t ready since the Boss had been fighting a nasty cold for a while.  So, before heading to town, I spread some shavings, found some heatlamp bulbs, turned on the lights and put out food and water so the brooder would be warm and ready for the new arrivals.

When I got to town, a most apologetic postal employee greeted me.  He was so sorry that I’d had to drive all the way to town to pick up the chicks, but somehow they’d been delivered at an odd time of day and there wouldn’t be another carrier going to Mbrk until morning…and the chicks certainly couldn’t sit in the Post Office all night. I assured him that I understood and totally appreciated his concern for the chicks. This wasn’t the first time it had happened...and a trip to town is not a real big deal...it’s just the un-expected-ness of it that throws things off kilter.

That wasn’t to be the end of the “un-expected-ness” of the week.

When the "new arrival" phonecall finally came through…it wasn’t quite how I envisioned either.  For a little bit, it looked like I might actually be personally involved in the arrival of #1 GB.  (yikes) Thankfully, dad-to-be got home from work and I bid them farewell as they headed off for the much-anticipated birth. Karl was born less than 3 hours later.
However, the un-expected reared its head again when it was discovered that newborn Karl had incurred a potentially life-threatening complication during his birth (or possibly prior).  He had a subgaleal hematoma.  A rare occurrence, happening only something like 6 times out of 40,000 natural deliveries. The NETS (neonatal emergency transport services) truck came and took him from the birth center to the NICU at UVA. (the embodiment of one one his mama's greatest fears) To say that the situation was tense would be an understatement. He could have easily gone into shock, or quite possibly bled out.

Knowing that there’s an emergency situation involving family members (and you’re not in a position to help at all) is awful. Sometimes cryptic texts make things far worse. And, as a note to myself (and anyone else):  DO NOT look up unknown medical terms on the internet!  Particularly not late at night. Don't do it! It's scary…just TOO scary!

The only pro-active thing the Boss and I could do was head over to the Draft to feed the dogs, goats, chickens and ducks for the kids while they were at the hospital.

I have to pause here to say that I’m fairly certain that every member of this family never, ever wanted to have to head to University of VA Medical Center again…or even think about it.   We all (particularly Toughchick) spent far more time over there in ’10 than enough. And, the very term ICU stirs some awful, unwanted memories for all of us.  However, it was truly the very best place for Karl.

So, Thursday found us un-expectedly travelling to UVA to visit our grandson for the first time and attempt to grant a little encouragement to his tired and worried parents.  At that point, it sounded like he would be in ICU for a while.  Hugs all around and we headed back to the Draft to feed again before going home to our own chores.

Friday’s dismal weather did nothing to lift our spirits and outside work was out of the question (despite the fact that Opening Day of the Market is just a week away) because frigid weather was headed back to the Valley.  I’m beginning to think that Winter is never going to relax its grip on this area.

But, the day did end with the wonderful news that Karl had left the NICU for a regular room in the hospital.

The coming change in weather meant that we needed to cover the garlic crop to protect it (somewhat) from the cold.  I can’t believe that we nearly gave up on this crop.  It is absolutely gorgeous and we can only hope that the cold doesn’t stunt its growth too much.

The cold weather also means the grass isn’t growing like we expected.  So, it was off to the hay guy’s again…

But, not before it snowed…again.  No kidding.  An unexpected snow squall came through, momentarily blanketing the early spring blossoms.

Then we headed back to UVA to visit again.  Thankfully, Karl was doing much better.  However, jaundice was now a concern (as his little body re-absorbed all that blood) and he was spending some quality time under the bili-lights.  But, we got to visit and I actually got to hold him…and we’re all hopeful that the whole family will be home soon.

This morning’s 16* was rather unexpected for this time of year, too. COLD! Although it’s supposed to warm up nicely and be more seasonable this week.  Here’s hoping!

We have lots to do in this week. The Market starts next Saturday…no matter what the weather might be.

Just six days to get ready…!

So, the upcoming week promises to be “interesting” to say the least. The Market starts…surely Karl can come home…and we get to “see” #2Grandbaby (due in August)...and those are just the highlights...


P.S.  So sorry for the late posting of the "Sunday Walkabout"...we took another trip to C'ville to visit the newest family member.  Please pray that his bilirubin numbers look okay and that he can finally come home tomorrow.  EVERYONE will feel much better when he's home with his mom and dad.