One week closer to Spring!

That’s the thing we’re going to have to focus on here, folks. ‘cause the snow is still here, it’s incredibly cold, and there’s more wintry precipitation in the forecast. (for the better part of the week) Oh, and the garden supply company called to say that the seed potatoes are still snowed in at the warehouse somewhere and won’t arrive for at least two weeks. (so, there’s yet another change in plans)

Positive thinking.  That’s about all we got goin’ for us at this point.  ...and icicles...lots and lots of icicles! 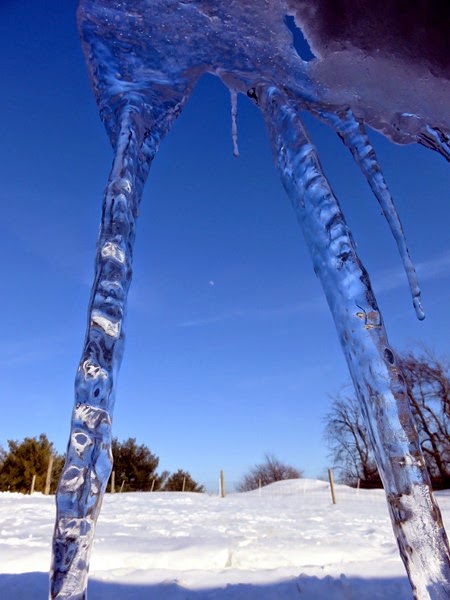 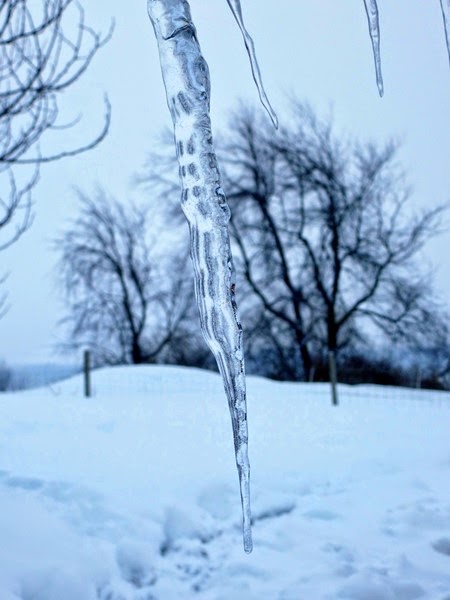 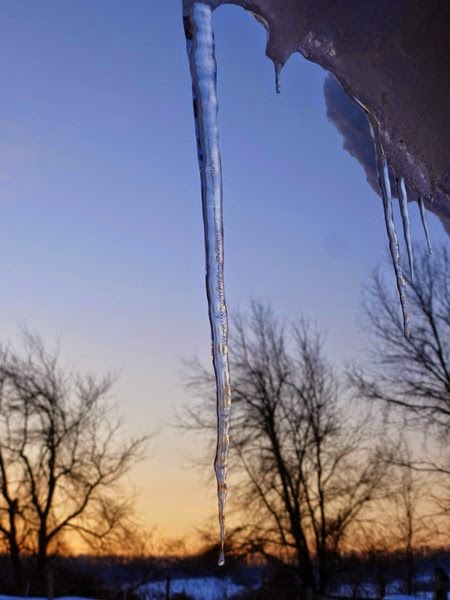 Despite the snow that has now become immovable icebergs, the continued threat of winter weather and the very real potential for life-threatening MUD if this stuff melts, there were actually signs of SPRING this week.  And, that’s what’s keeping us going.

Of course, that is the general idea when you order chicks...that they arrive alive. But, did you know that chicks…day old chicks…come through the mail? The newly hatched chicks are boxed and shipped and arrive within 48 hours.  While this practice has come under fire from some animal rights groups, it is not at all harmful to the chicks.  They are still absorbing the nutrients from their egg and as long as delivery is not delayed, they are perfectly fine when they arrive. They adapt quickly and it is amazing to watch them begin to eat and drink without any instruction.

My concern this year was the record-setting cold temperatures. This was the first time we had ordered broiler chicks this early in the season.  But, after last year’s difficulties getting chicks from the farm store, (did you read this one?) we decided to order directly (and order extras to cover any transit losses). But, when the orders for the entire year were placed in December, we didn’t count on the incredibly cold temperatures. As I checked the weather again and again (yes, I admit it, I get a little obsessive about the forecasts) things didn’t look good. The overnight lows were predicted to be in the single digits.  While the chicks’ toughness belies their cute and fuzzy appearance, the temperatures were going to be brutally cold, and that’s hard on even adult birds.  But, every single chick in the box was alive when they arrived!  So, here’s a shout-out to the much beleaguered Post Office. THANK YOU!  And, Moyers’ Chicks has been our great poultry supplier for nearly 10 years now, and they are truly the best…a big THANK YOU to them as well!.

8 weeks to fresh chicken for the Market!

I realize that some folks feel bad about eating the sweet little chicks (and lambs for that matter) but, that is the one purpose in life that these animals have…to provide nourishment for us.  They are well-fed and well-cared for while they are alive and truly appreciated when they make it to the plate.  It won’t be long ‘til these cute and fuzzy babies are big, fat, lazy “eating machines”, growing at an incredibly fast rate.  And, this is not because of added hormones (those are illegal in ALL poultry production) or any questionable inputs.  It is all a matter of good health and breeding…and plenty of feed. This season I plan to document the process from postal delivery to suppertime. In the meantime, you can read this. The question was raised as to the difference between broiler chicks and layer chicks, too.  I guess I'll write about that one as well.

The chick’s safe arrival was just one of the sure signs of Spring here on the hill this week.  We just won’t think about the fact that they are living in the shop instead of the brooder (yes, with the lambs…well, not exactly WITH the lambs...they are in their own little pen). Because, yes, the weather IS still keeping a fair amount of farm work from happening. But, we are indeed making some progress.

In order to be ready for the growing season, I spent some time cleaning out the shop-greenhouse.  It becomes a real mess when I’m feeling tired and rushed and just basically toss stuff in the door on my way elsewhere.  I keep telling myself I will take the time to be neat and tidy….but…well, let’s face it… I’m just not very neat and tidy.  A little effort and everything is back in order once more and seed-starting can begin in earnest.


The cold temperatures and gloomy days have really hampered germination.  But, since it’s already two weeks later than I had originally planned, I went ahead and seeded the broccoli, cauliflower and cabbage for the early crop.  Soon, I hope to see over 700 little seedlings sprouting! I also started some lettuce and moved all the kale and spinach seedlings to one location in hopes of keeping them warm(er). I was hoping to have them in the hoophouses by now, but…again, the weather is a factor.

With five weeks to go until Opening Day of the Market, the hoophouses should be full of growing transplants.  That’s just not the case this year.  There are huge drifts along the sides of the hoophouses and inside they feel like iceboxes (or furnaces once the sun starts reflecting off the snow).  While there are crops surviving in the houses, it certainly isn’t like other years.  New year, new challenges.

I’m thinking the Market will get off to a slow start this year.

Speaking of the Market…we went downtown Saturday to make our deliveries and decided to stop by the Wharf (where the Market is held) to see what it looked like.  If anyone wondered just WHY there’s not a Farmers’ Market in the winter in Staunton…this is just ONE reason. At this point, I am just hoping that this stuff melts by Opening Day!


And, while I said last week that I wouldn’t be whining about the weather this week…we are under the gun once more with wintry precipitation.  Today is supposed to be sleet and ice. (this can be far worse than snow as power outages and tree damage can be factors) Then, there is the possibility of measurable snowfall AGAIN later in the week.   I’m hoping that this qualifies as “March coming in like a lion” and we will indeed see a big change in the weather by month’s end.

But, all things considered…life here on the hill is good.  Everyone and everything is well-fed and well-cared for…there are only 19  days ‘til the official start of Spring…so what more could we want?


I do hope you’re having a Happy Sunday! 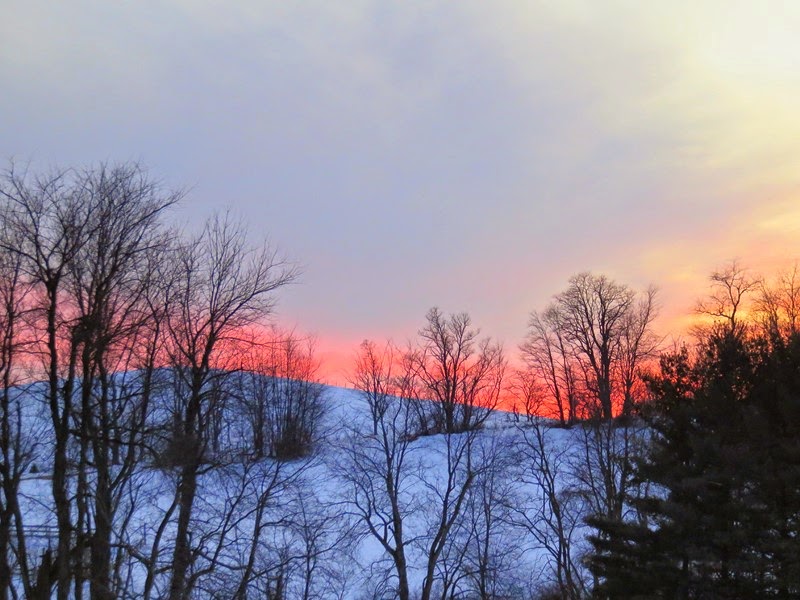 Thanks for stopping by.  Come back and see us again real soon.


While I can't assure you that the snow will have stopped or melted...we will be even closer to SPRING! (hooray) 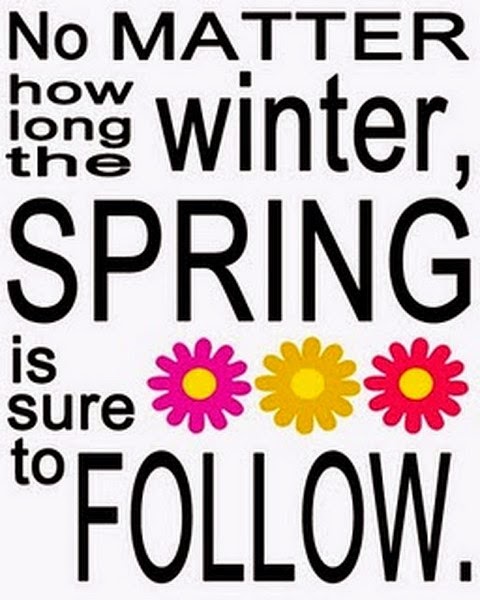