It is truly amazing what a difference seven days can make!

Last Sunday, we were still covered in snow.  Lots of snow. 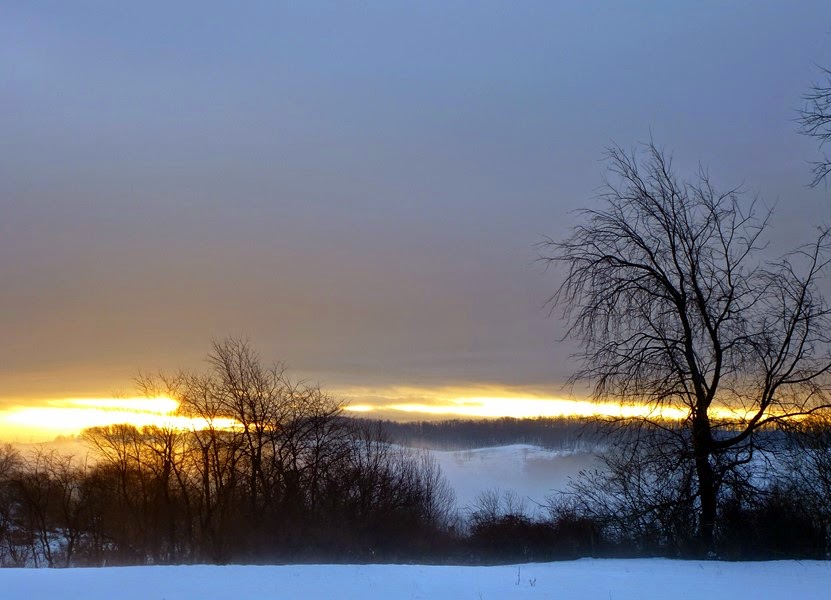 This week…the snow is GONE! 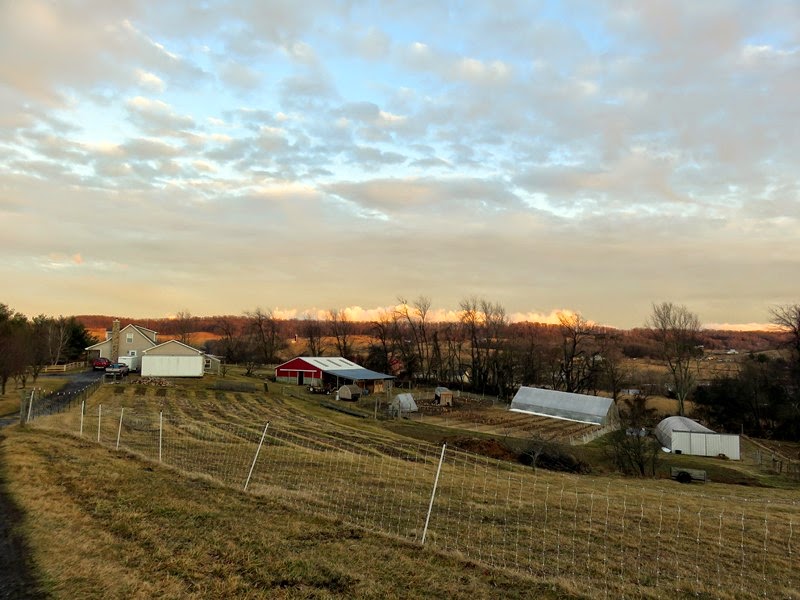 And, we're sinking in the mud.

But, at least it’s not cold…and while it is rather windy (that will dry the mud)…at least we can see the ground and it is no longer WHITE.

We got a LOT done in the past seven days, too. (mostly because the snow is gone)

As a matter of fact, we actually did all the jobs on the TO-DO list.  Granted, it wasn’t a long list and I’m being a little “generous” on the definition of one job…but, then we accomplished a few things that weren’t even on the list. All in all, a successful week by any definition.

The Boss has been worrying over the shop roof for nearly a month.  We lost a bunch of shingles in a big wind storm, but before he could get up on the roof to repair it (without the risk of blowing off the roof) it snowed.  And, then it snowed again!  The combination really worried him, so he’s been surveying the roof anxiously for quite some time. 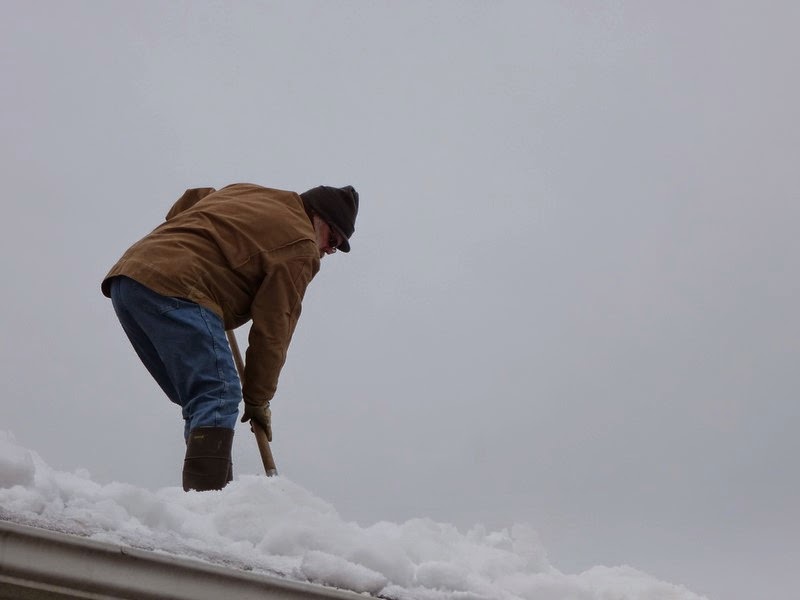 Monday was deemed “shop roof day”.  First, he shoveled all the snow off and hammered in the loose nails. 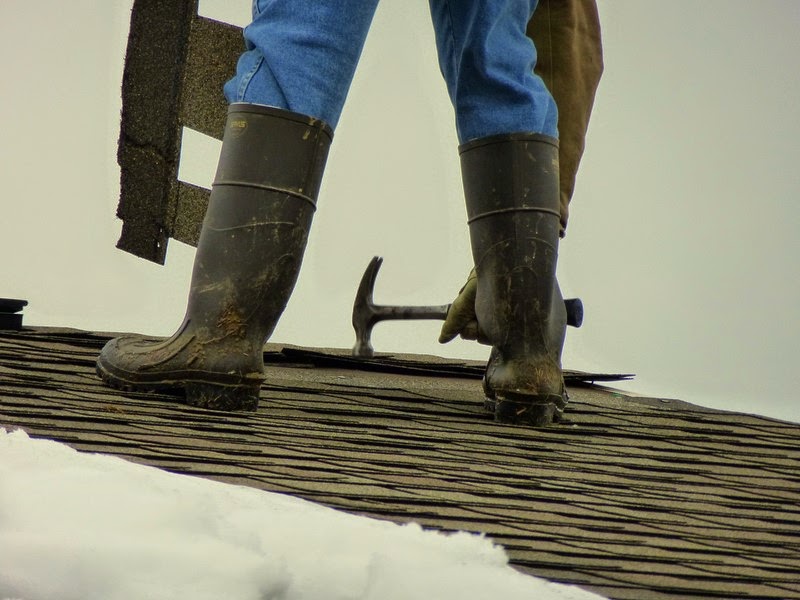 Once the day warmed up somewhat, he went back on the roof with some shingles to do the actual repair work. 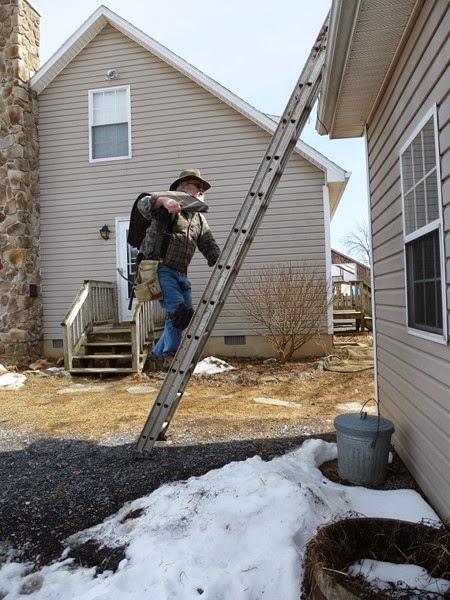 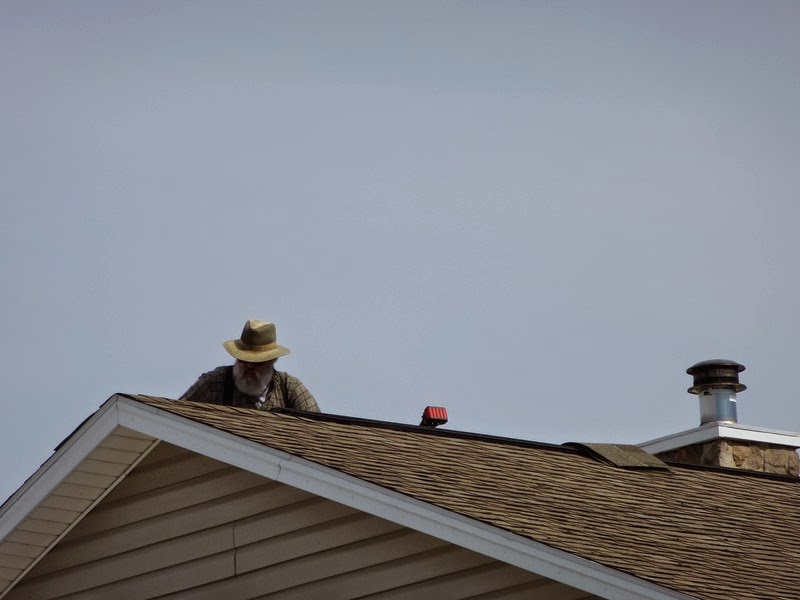 Even though he’ll have to go back up and re-check on a very warm day, I think he can rest easy for a while now.

With the shop roof repaired, it was time to focus on the inhabitants of the shop.  Although the shop has played host to innumerable activities over the years, from automotive repair and furniture building to church worship and numerous covered dish dinners…it had never been as close to being a zoo as it had for the past two weeks.  (and believe me, it smelled like one, too) While lambs and chicks are indeed cute little critters, they do NOT make good indoor pets.

First the broilers were re-homed to the brooder.  The move went off without a hitch and they adapted quickly to their new home.  We hope to get them out on pasture in just a couple of weeks, but we’ll have to keep a close eye on the weather.  We also got an email from the hatchery that the next batch of broilers has been “set” (meaning the eggs are in the incubator) and those chicks will arrive in a couple of weeks…so we are off and running with the succession of batches of broilers for the 2015 season. (we’ll be getting chicks every four weeks through September)

Then it was time to move “Dot” and “Dash” the little bottle lambs to the barn.  This was a little more tricky as we couldn’t just pack them in a crate and haul them wherever we wanted.  We each carried a lamb and a bottle. That was interesting, to say the least. They didn’t really want to be carried, with or without a bottle. (as for attempting to lead them anywhere…we would probably still be working on the project if we had gone that route)

We put them in a little pen inside the “Piranhas’” stall.  They will get to go outside next week, once I am relatively certain that they have assimilated with the rest of the flock.  They seem to be thriving and “Dot” actually weighs 17 pounds! That’s far smaller than any of the other lambs. (the largest lamb weighs in at 83 pounds...at 2 months old)  But, she is a triplet (they’re always on the small side) and she’s a bottle lamb as well. (they generally grow slower than dam-reared lambs, too) More on my “pet lamb” project in another post. (because it’s been one for the record books)

The “Piranhas” are going to be completely weaned from their bottles by the end of the weekend.  To this end, they are only getting one bottle a day.  (they eat grain and hay quite well) The actual weaning process isn’t causing too much of a problem, but they won’t to go outside with the rest of the sheep. They’d rather stay in the barn and call for me.  Hopefully, they will outgrow this behavior soon…because it’s really loud…and annoying.

We are on call 24/7 around here.  You just never know when (or why) you might be called into action.

As we were quietly reading just before bedtime, I heard an odd noise, a distant, sporadic hum of some sort.  Figuring it was some alarm that was either overlooked or fouled up during the time change, I went to investigate.

It wasn’t an alarm, it wasn’t distant, and suddenly it was no longer sporadic.  No, somewhere in the darkness a lamb was quite agitated about something and he was bellowing. “BAAAAAAA!”

After donning barn attire (it’s mud season and you should NEVER go out in mud season without coveralls and boots---see my t-shirt in the photo above) I headed out.  Of course, my arrival at the barn was greeted with complete pandemonium as the sheep were convinced I’d brought a midnight snack and ALL the bottle babies assumed that meant another round of bottles.  The noise in the barn was almost deafening, but, somewhere, someone was still going “BAAAAAAAA”!

Slogging through the muck behind the barn, I found the source of the noise.  One of the bigger (but most definitely not brighter) lambs had decided to go through the bars on the side of the creep feeder instead of using the gate. (a couple of weeks ago, they all fit through any of the openings on the feeder) And, he got stuck.  Seriously stuck.  His nice fat hams were thoroughly wedged in between the bars.  “BAAAAAAA!”

He got frightened by my headlamp shining through the darkness and slammed himself forward.  “BAAAAAAA!” That only served to wedge him a little tighter.  He really flipped out when I grabbed him by his back legs in an attempt to pull him free going the opposite direction. I pulled, he popped free…but, not before he kicked me in the chest, splattering mud and muck (and sheep poo) all over the front of my coveralls. (THAT’S why you always wear boots and coveralls!)

Problem solved, I headed back to the house, leaving him to join the rest of the sheep in their complaints about the treatment here on the hill. Without any hay or my feed bucket (or baby bottles), I am just not real popular. (sad, but true)

My point in telling you that story?  Our job has no set hours, we’re always ON-DUTY...and paying attention to odd noises and random occurences.

Then, we actually braved the hoophouses.  I’ve got to admit, the hoophouses haven’t gotten a lot of attention this winter.  Partly because I’ve been making baby bottles (that number alone is staggering and worthy of its own post) and partly because I just haven’t felt like it. (after four rounds of antibiotics---the sinus infection is finally history) but, mostly because of the weather.  It’s just been too cold to allow anything to grow.

Except for the chickweed.

Much like kudzu has taken over huge portions of the South…chickweed has engulfed the hoophouses.  It spreads and seeds itself with wild abandon and while the hoophouses are a riot of healthy green growth, and it can be eaten…it’s not exactly what we had intended.  The crops we did intentionally plant in the late fall have been just sitting there, all winter long.  We expect winter growth to be slow, but not non-existent, which has pretty much been the case this year.  It’s been frustrating in many ways.  Without growth, we can’t make sales.  Without some warmth, there’s no point planting anything else…which means that sales will continue to be off….and without our vigilant attention, the chickweed takes over creating more work before we can think about planting and working in order to be harvesting and selling…and…well, you get the picture.  But, the hens benefit greatly from the added "green stuff" in their diet. So, there is that.

Anyway, the weather broke and the tiny tiller started. And, we could get back at it.

The farm store finally got some onion sets (yes, those were delayed by the weather as well) After the Boss tilled, I raked and planted and now we at least have onions and radishes in the ground.  And, guess where we’ll be spending lots of quality time in the next week (actually lots of quality time for the rest of the season).

Then, we hauled some hay (hopefully the last for the winter), the Boss completed a few projects, I started some more seeds and we did our next-to-last delivery run for the season.


We even “worked the lambs”, but I’ll have to tell you about that some other time.

It’s been a good week.

It looks like the weather will be cooperative in the upcoming week as well and we might get back on track.  Let’s hope so.  Opening Day of the Market is just 20 days from now.

This is the point where I generally go into some sort of mild panic about our state of readiness, or rather our lack thereof.  But, then I calm down (somewhat) and get back into the rhythm and routine of Market season.  After 18 years as Market vendors, much of the choreography necessary to make the operation run smoothly just comes naturally. It's just a matter of getting back in the swing of things.

Honestly, it feels SO good to get back to digging in the soil and working outside (even if it is only in the hoophouses). I am not alone in thinking this. Apparently, there is some microbe in soil that enhances mood. Really, I didn't make that up...read THIS.

So, I guess that leaves me with no excuse for being out of sorts or grumpy, we certainly have enough work to do that involves soil in some form. 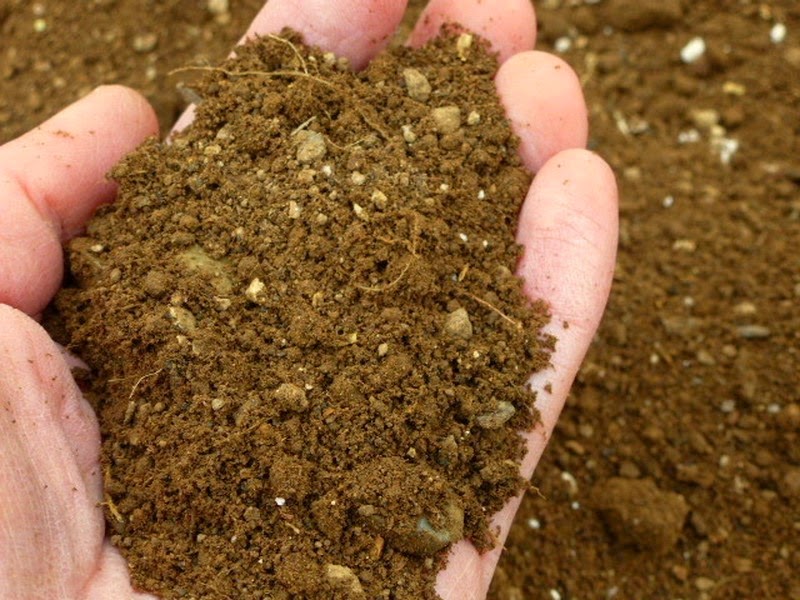 With that in mind, I’m off to fix some more baby bottles and head out to do chores once more…

Thanks for stopping by…

Please come back and visit us again real soon!