This week we found that cleaning, yes, CLEANING, can affect the entire farm. 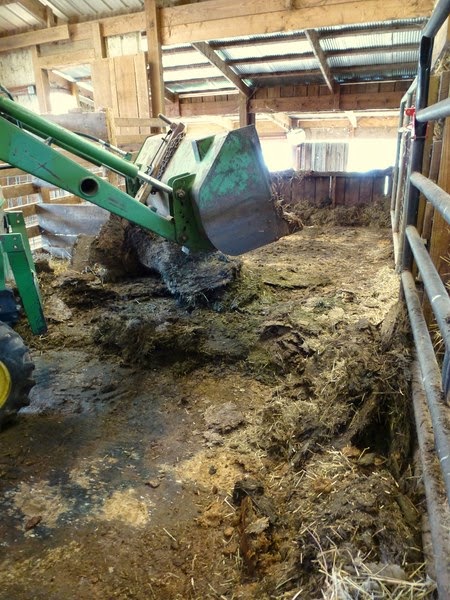 This week, the Boss finally got around to cleaning out the barn. This time there was no messing around, he took it down to dirt where the sheep spend the winter.  (Last year, we didn’t get a chance to do a thorough cleaning and if the waste hay piled up much more, the sheep were going to hit the inside of the roof!) 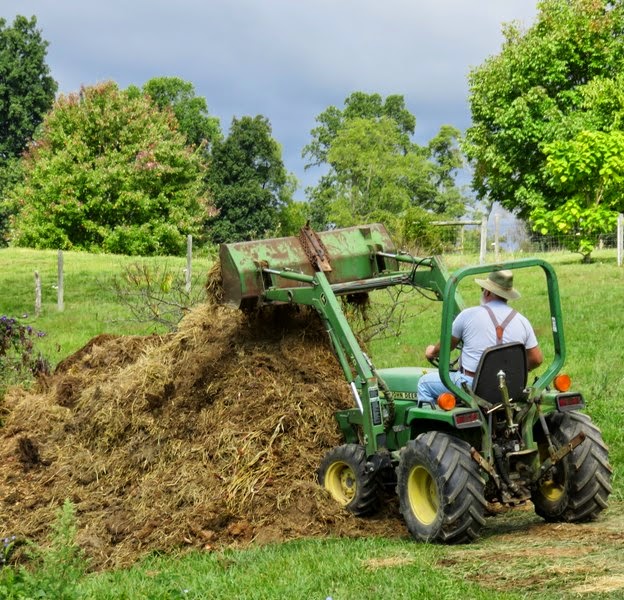 When I got back from town on Monday, barn-cleaning was in full swing.  He had already taken countless loads out to the compost pile between the gardens. 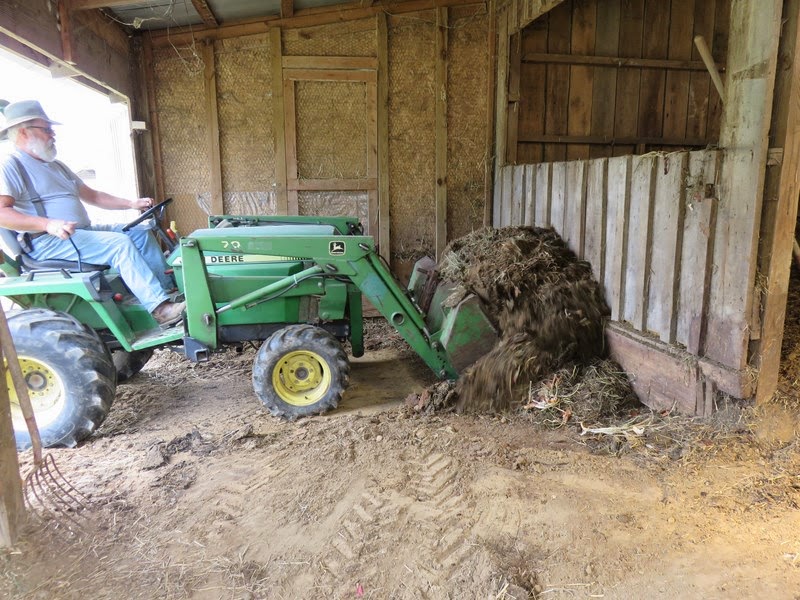 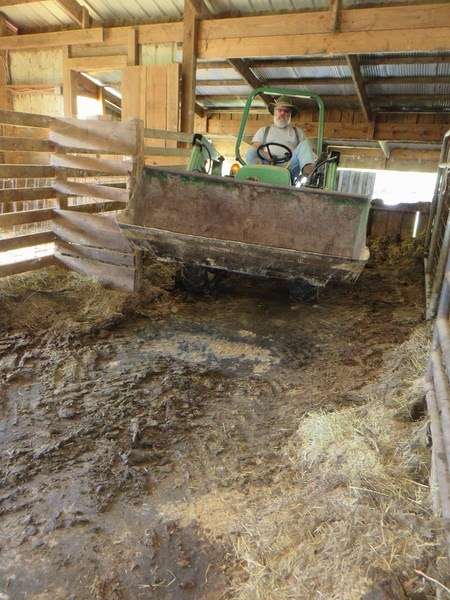 He had also started another project.  Because one thing ALWAYS leads to another!  To make cleaning easier, he removed the back wall from the sheep shed.  Then, he realized that he could take the unused doors from another part of the barn and put them on the shed.  This would allow some much needed light and make any future cleaning much easier. This is just the latest in modifications to the barn.  You might like to read this.

The cleaning didn’t get finished on Monday, as we had an engagement to attend.  And, since it was in town, it certainly wouldn’t do to arrive smelling like the barn.  Which, I might add, the entire farm did by this point. (and not a nice clean barn, either!  blech)

Our engagement in town was to act on behalf of the Market to receive an achievement award from the Staunton Downtown Development Association. For over 20 years, the Market has been a vital part of the eclectic atmosphere that has gotten Staunton recognized nationwide as “one of the best small towns in America” among other things.  Yay, Staunton!  Yay, Farmers’ Market! (and thanks to Sarah B for the recommendation) You can visit Staunton virtually HERE.

But, talk about feeling out of place!  Two old farmers in a wine bar?  Well, at least we wore our CLEAN boots. 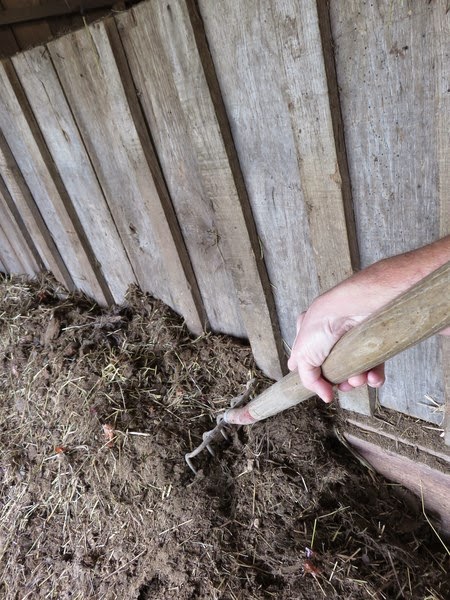 Back at the farm, the cleaning continued.  By day two, it was time for me to pitch in and work on the corners so the Boss could get the job finished.  We now have two enormous piles composting away that will be used to add nutrients to next year’s gardens.

…and unfortunately, the entire place still smells like a barn! Although, it’s getting better.  Or, maybe my nose is just getting used to it.

All that cleaning and de-construction meant that there was a bunch of junk that needed to go to…you guessed it…the dump.  How we need to go to the dump so often is beyond me, but to the dump we went. We found that they’ve changed the rules to the dump and without a dumpbody truck or trailer, you are no longer allowed to go out to the landfill part of the dump, you just put the junk in the big dumpsters and they take it out to the landfill.  Oh, what a disappointment!

A requisite trip to Lowes for hinges and odds and ends and the barn will be ready for winter.

On to other things…

The usual line-up of planting, picking, clearing, tilling, weeding and battling bugs continued.
We processed the green beans leftover from the Market, so now we have plenty of green beans for our Winter Customers.

The Boss started digging the fall potatoes this week and the winter squash are just waiting for our attention. The seedstock for next year’s green garlic arrived…and we got a flat of strawberries from a fellow market vendor…so, the upcoming week promises more of the same. 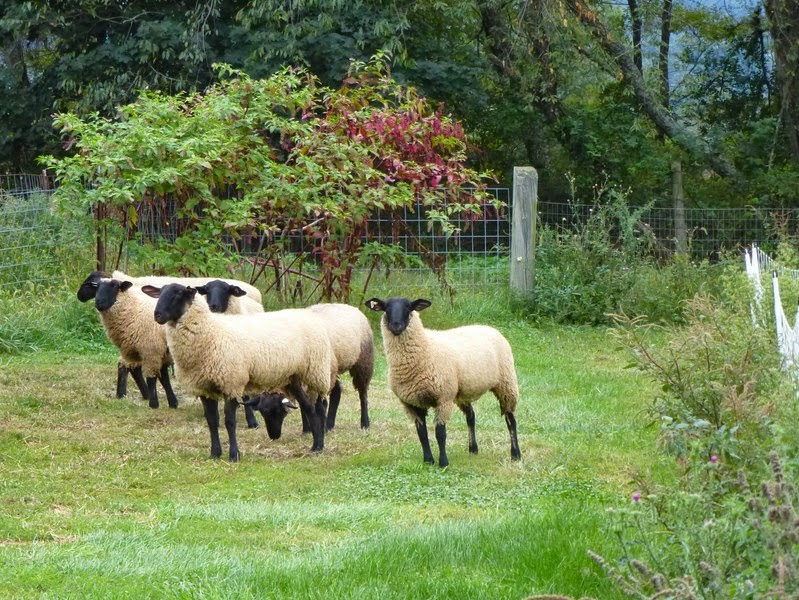 As I was heading back to the processing shed from the hoophouses/garden on one of my countless trips during harvest, something looked just a little bit odd…something (or someone) was out of place.

When the Boss was cleaning the barn, he must have forgotten to re-attach the fence at the barn wall. I didn’t know this and turned the lambs in the alley to graze and they discovered the gap in the fence.

Yikes!  Lambs don’t belong roaming around that side of the barn!


They saw me and started following me toward the house.  Double yikes!

When I hollered for the Boss, Gus and Ellie came galloping over.  It was apparent that Gus was thinking “cool, let’s play guys!” as he ran toward the lambs.  The lambs were having none of that and headed toward the barn.  (thankfully) The Boss and I got them corralled quickly and he fixed the fence and the excitement was over before it started. 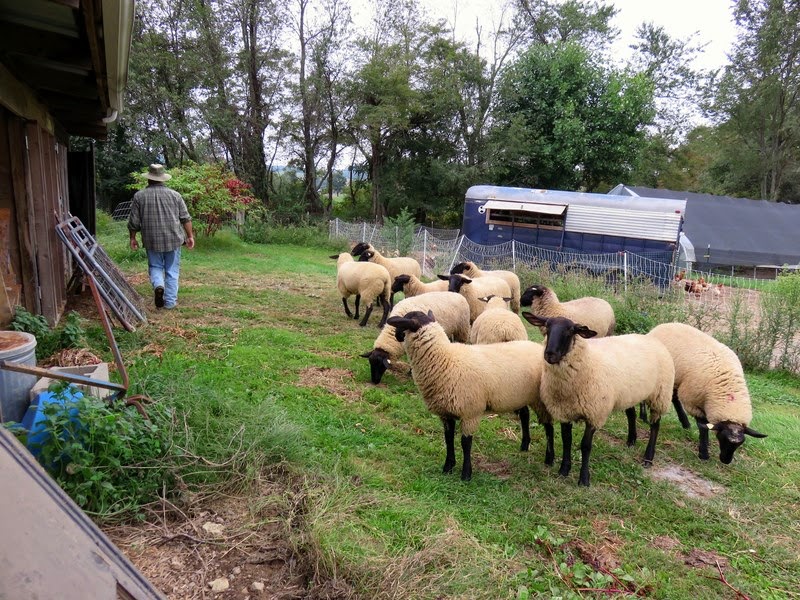 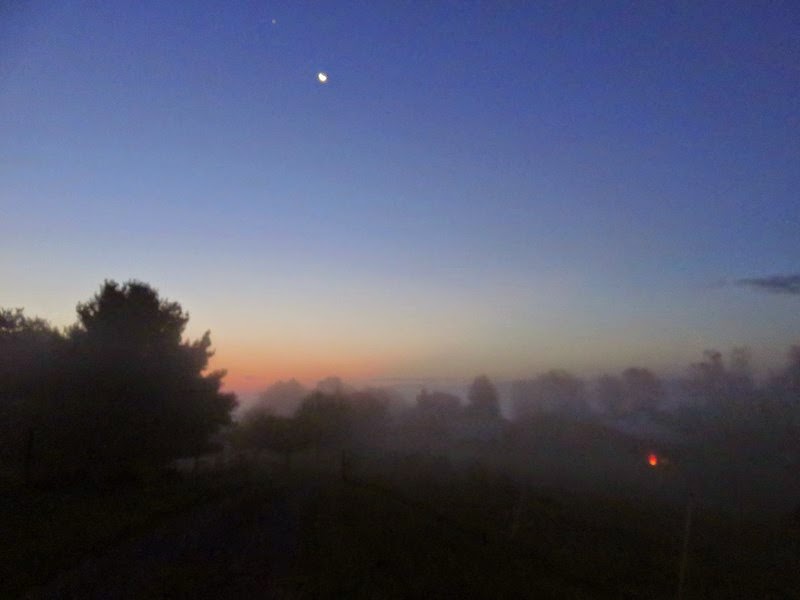 By then, it was time for another Market.  This time it really felt like fall as I pulled out of the driveway.  It was cold and dark…and really foggy.  The fog wasn't as bad in town, and once the sun came out, it was a gorgeous day.  I guess the cold and dark slowed the customers down some.  The Market didn’t get hopping until after 10 o’clock.  But, it turned out to be a great day. 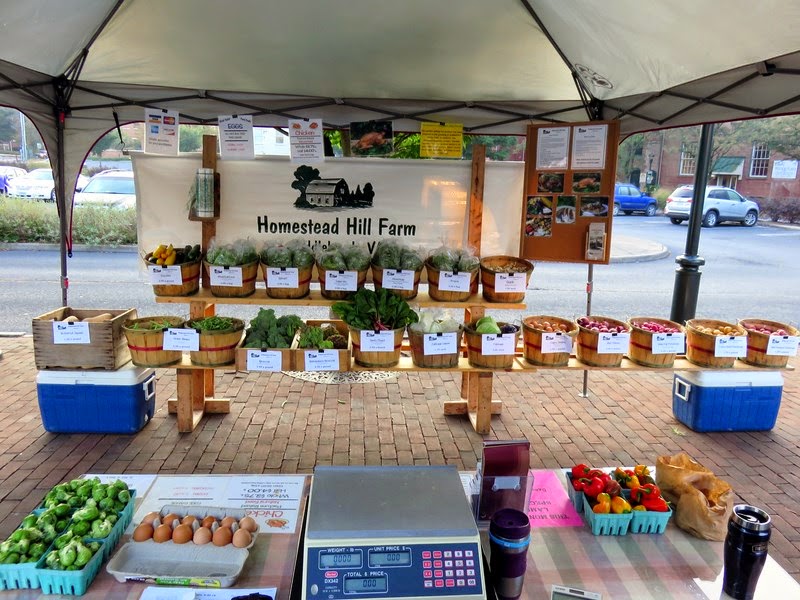 …and that, my friends, was the week on the hill.

Thank you so much for stopping by!

Hope you’ll come back and visit us again real soon.