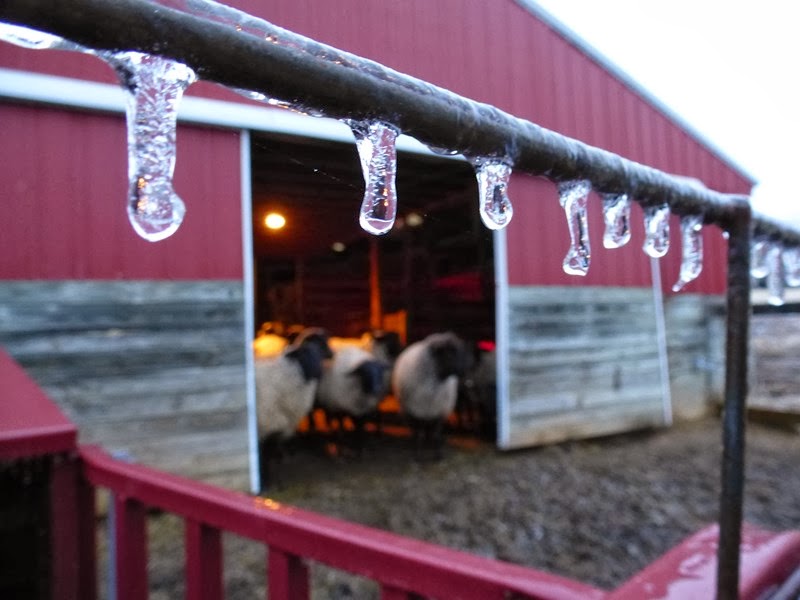 You know things are not good when you start saying that on Monday afternoon. While I cannot, in all honesty, say that things are going badly here on the hill, the “nuisance factor” is running at a near all-time high.
The weather has been well…the winter that just won’t end.  Our weather woes are nothing to those in the mid-west where the weather has been historic AND they have a propane shortage.  And, I know it sounds like I am just whining when I say “I’m cold and it’s muddy”.

The cold (we had a couple of nights with negative temps and days with teens as highs) froze a big portion of the crops in the hoophouses. That isn’t just an inconvenience, it will cost us a good deal in lost sales.  I will have to re-seed and re-plant before we can get back on track with any sort of sizable harvest.

As for the mud, it is unlike anything we have ever experienced here on the hill.  The sheep are stuck in the barn because the muck in the barnlot makes it impossible for them to walk out to the winter paddock.  Literally.

Every muscle in my body was sore last night after slipping, sliding, slopping along to get feed in the feeders.  It’s like quicksand, pulling off boots and stopping you dead in your tracks as you try to walk along.  Add a bucket of feed and some hungry ewes and you have a recipe for possible disaster.  All the mud (and being stuck in the barn) means the ewes are eating copious amounts of hay…and that stuff is expensive! The hen yard isn’t much better, but the chickens are smaller, so the whole feeding challenge isn’t quite as intense. It’s still gross and disgusting and the hens don’t lay well in the cold, dark days of winter. But, they still need feed, lots of feed, even if it is just to keep them somewhat warm and alive.

The weather has also caused internet woes. We don’t realize just how dependent we’ve become until it doesn’t work. …and it hasn’t worked all week.  First they said something needed to be re-set, then they said the tech was out…then they said….  Oh, does it really matter?  Living in the country has some definite advantages and I wouldn’t want to live anywhere else…but, I now understand why my son-in-law was adamant about internet connection when he and Toughchick were looking for to buy a home.  Our 21st century lifestyle demands internet access and it needs to be truly reliable.,,even if it's just to pay the bills and answer my emails!

By Wednesday, the issues with the weather and the internet had reached a whole new level of annoyance.

I woke up before five and hoped that I could finally get caught up.  I mixed the lamb bottles and headed out to feed the babies…and nearly slid off the backporch.  Yikes!  Freezing rain had fallen in the night (and was still falling) there were icicles in the trees and a glaze of ice on the grass and path to the barn. Of the various weather phenomena, ice has the potential to cause the most problems.  The trip to the barn wasn’t terribly treacherous, the lambs drank their bottles, the other sheep didn’t escape and the dogs and cats were satisfied with a cookie.  Now, to work!

During the wintertime, I NEED everything to work smoothly on Wednesday mornings.  (I’d like things to work smoothly every day, but I am a realist) All winter, we offer our farm products to a select group of customers, sending our availability list out on Wednesday and getting their orders back by Thursday afternoon.  Then, the Boss and I pack orders on Friday and deliver them downtown on Saturday morning.  This method has served us (and the seventy some folks on our list) well for six winters now.  They get fresh eggs, greens (sometimes) meat, veggies and frozen goods…and we have some income during the notoriously lean winter months.  So, yes, I need the computer to work, the power needs to stay on, and the internet connection must be operational. Oh, I forgot to mention…this email HAS to go out by SEVEN a.m.  We have folks that are waiting for this email, hoping to get the items that are often in short supply this time of year.  So, I can feel the clock ticking from the moment I get up.

No internet. Okay, no problem.  Compose the email (which gets pretty long and involved) and then cut-and-paste it into the mail program and hope for the best. It was freezing cold in the office, so I set up my laptop by the woodstove.

For some reason, my laptop decided that it wasn’t talking to the computer on my desk.  Or maybe my desk computer was the culprit.  Whatever the reason, files couldn’t be shared.  Tick, tick…
The Boss is the IT guy around here.  He couldn’t fix it.  Tick, tick….I re-typed the entire email on the office computer, in the freezing office.  The internet connection had been re-established.  (momentarily)…yipeee!

The connection was gone.

Sometimes the 21st century is a real pain.

In order to get something out to the customers, we decided to send out a bulk email from my phone.  That was another trial, but I’ll spare you the details.

With that done, we headed out to chores.  Chores were uneventful. (thankfully)

By the time we had finished breakfast, the Boss had settled the dispute between the computers and at least they were on “speaking terms” once more.  The internet still wasn’t back, and we began to formulate a plan to get our email out.  This is our income for the week, so despite the fact that I was about ready to ditch the whole thing, we soldiered on.

Then, the power blinked… It came back on, but the continued freezing rain continued to fall…a prolonged outage was a real possibility.  Now what?

The Boss had to run an errand in town.  If we packed the laptops, we could swing by Blue Mountain Coffee (thanks Sarah!), get a cuppa and use their wi-fi and all would be right with the world. Theoretically. So, despite the slippery, foggy conditions…we set out.  He said it would be an adventure.

The entire email was bounced because we exceeded the daily limit.  WHAT?  Oh bother!  I didn’t cuss even though I really wanted to...and throw things too….but, we were in public, so I behaved.  The Boss laughed out loud, because…well, what else ya gonna do? Remember all those times I hit “send”…hoping to get a momentary connection?…apparently Google decided I was a spammer and locked me out for twenty-four hours. (we’ll see if they let me back in today) The trip to town for naught, we headed back home since the lambs needed to eat again…and I was beginning to get “hangry” myself. (hangry= hungry+angry…dangerous combo)

After lunch, our internet connection was miraculously restored.  Re-working the email AGAIN in my personal account, I hit “send” with some level of trepidation.

As I was sitting at the desk, sunlight came streaming in the window.  Sunlight?  Wait a minute!  Sunlight!

The sunlight was a wonderful treat and a welcome sight, but sunlight means extreme warmth in the greenhouses…and that can spell disaster all too quickly.  I raced out the back door, thankful that the Boss had thrown kitty litter all over the icy steps, in hopes of getting to the greenhouses before everything got too hot and the little seedlings got “cooked”. (we’ve lost a lot of seedlings recently due to temperature fluctuations…and my own lack of attention) 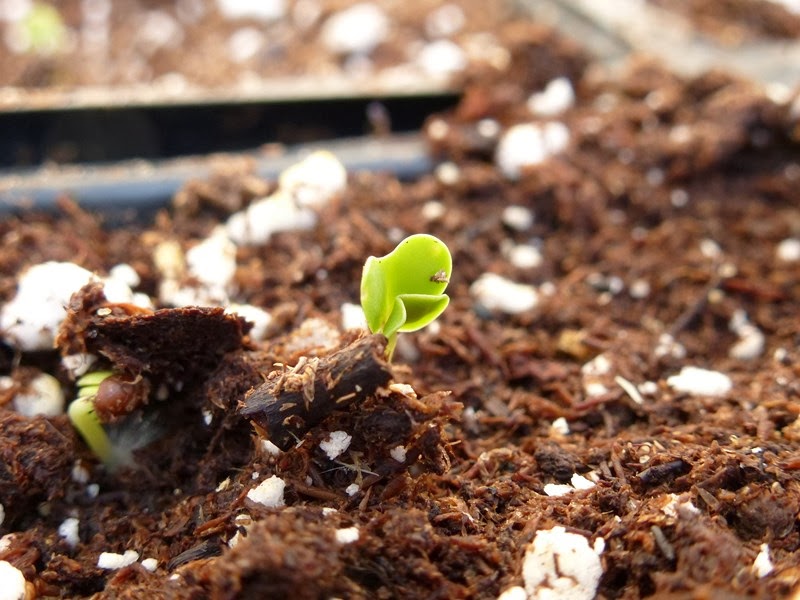 As I watered, I found numerous tiny broccoli seedlings just beginning to peek through the soil.  I just seeded on Monday, so this is exciting! 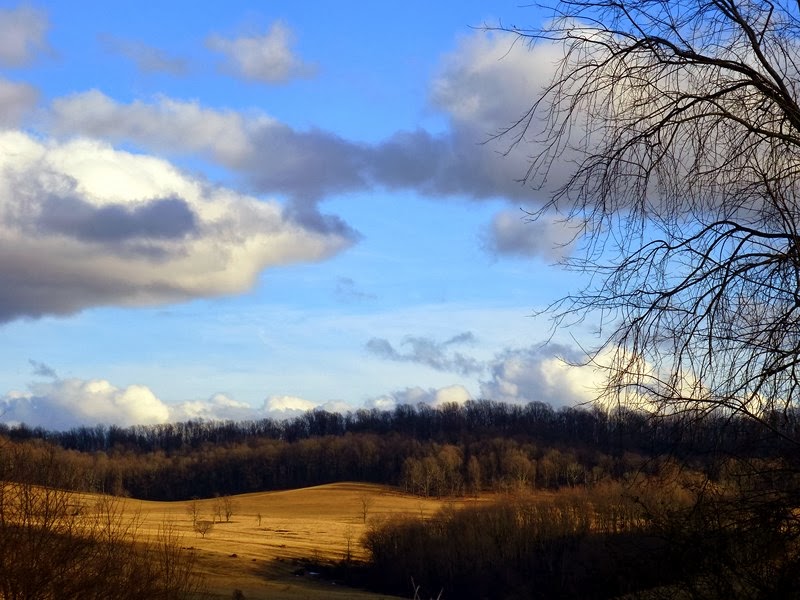 Somehow, the sight of the tiny seedlings and the bright blue sky made me forget the fact that it took SEVEN hours to send one email. The ice was melting.  I heard birds singing. Things were looking up.  The wind began to blow…that would dry the muck and mud…and we’re one day closer to Spring…

So, despite the trials and tribulations (if you can even call them that) of the day, the week, the winter….

I must say…I am thankful for “one more day”. (thank you for the title, Diamond Rio)  Each day is a gift that not everyone gets to enjoy.

on further investigation...the situation in the hoophouse is not quite as bad as I first thought. 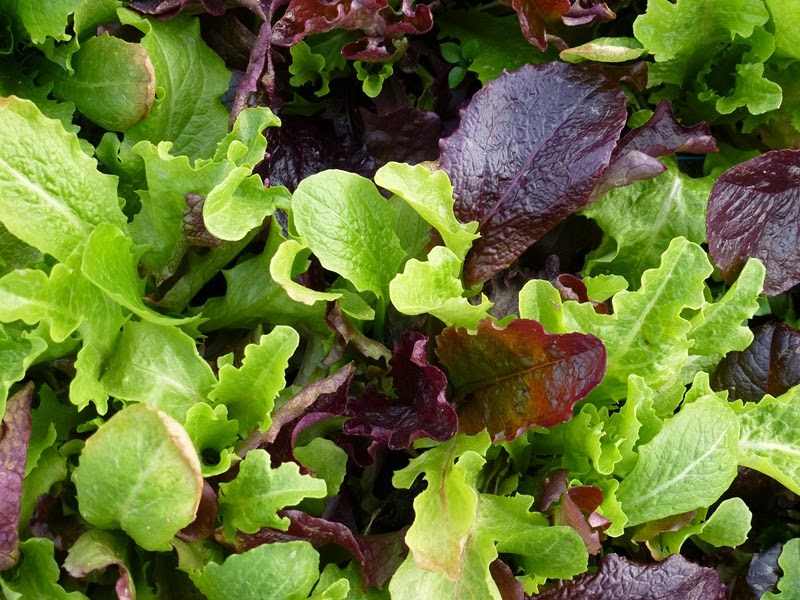 there are beautiful, healthy signs of life!