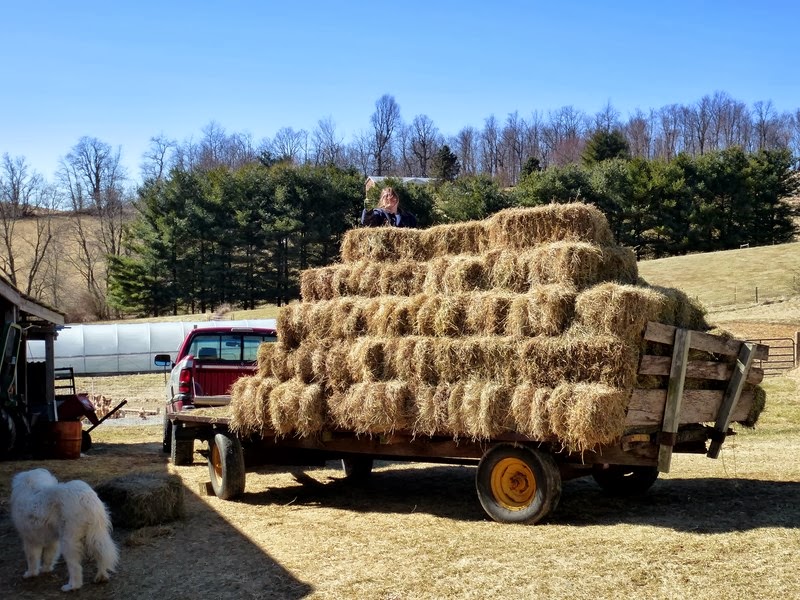 …it’s the one subject of contention here on the hill.

The Boss thinks I’m a little too free and easy with my hay usage.  He thinks I use far too much of what has become a fairly expensive commodity.

The sheep, on the other hand, seem fairly certain that I am stingy and mean.  They do not have any say in how much hay they get…and the complaints are often deafening.

In my own defense, I’m doing the best I can to keep everyone healthy and happy while remaining “on budget”. It’s a real balancing act sometimes.

Thankfully, Gus and Ellie (and the barn kitties) have no real opinion. Although they have been known to take a little nap high above the rest of the barn.

In order to re-stock the dwindling supplies, we hauled another wagonload from the hay guy this past week.  Blondie came over to help the “old folks” with the job….Yay, Blondie! (Thank you)

Our short run to the hay barn and back turned slightly adventurous when a BIG gust of wind pushed the wagon across the road.  While that was a little unsettling…it was even more unsettling to hear the Boss say…”WH---OOOOOAAAAA!  There they go!”  and to look back and see that three hay bales had BLOWN right off the wagon and were now sitting in the middle of MIDDLEB’K Road. …and there was oncoming traffic!  Yikes.  Thankfully, the bales were retrieved with little difficulty. …and we have the distinction of saying we’ve walked down M’brook road carrying hay bales.  While I am absolutely certain this is not the most unusual thing that has happened on M’brook road, it gave us a good story. 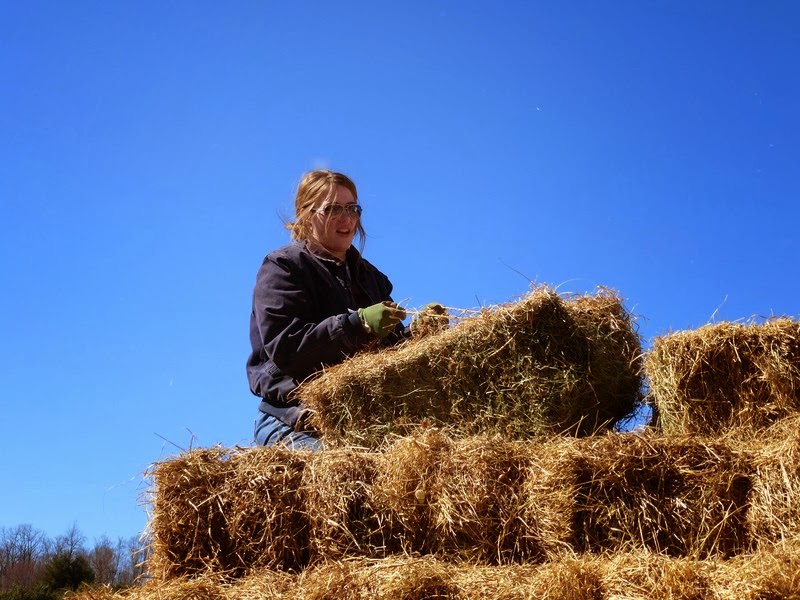 Once we made it to the hill, the hay was unloaded and stacked in the barn without further incident.  This load is perhaps the most beautiful hay we have ever bought.  (it should be, it cost a pretty penny)  In fact, it looks good enough for human consumption!

The ewes seemed to think so too.  They were all milling around and complaining (loudly), hoping for a hand-out. 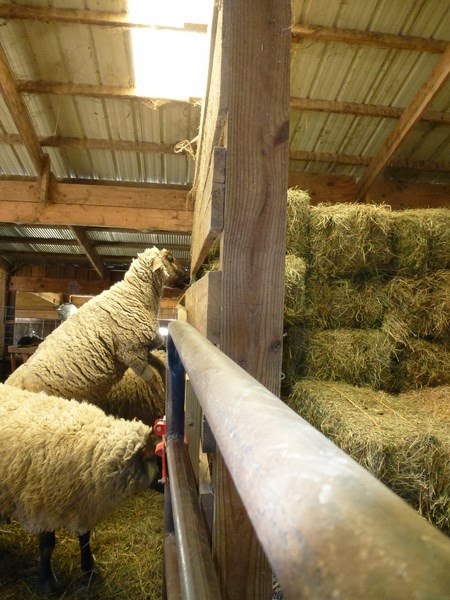 It wasn't long before one ewe took things into her own hooves. This is not the first time for this behavior, she's somewhat notorious. Did you read this? I don’t know if she is a little taller than the rest, or just particularly tenacious... maybe she is just part GOAT…but, she can get to the tasty morsels while the rest cannot.  She is able to stretch and push her thin nose through the crack in the wall and pull out huge mouthfuls of hay. She can eat a quarter of a hay bale with little difficulty, leaving a much smaller, somewhat misshapen bale behind.

This is aggravating, as well as costly…and it certainly isn’t fair to the rest of the flock. (not that sheep have any sense of fairness)

I’ve tried and tried to thwart her insatiable snacking, but with little success. This time, we slid feed sacks into the crack along the wall. Surely, this would work. 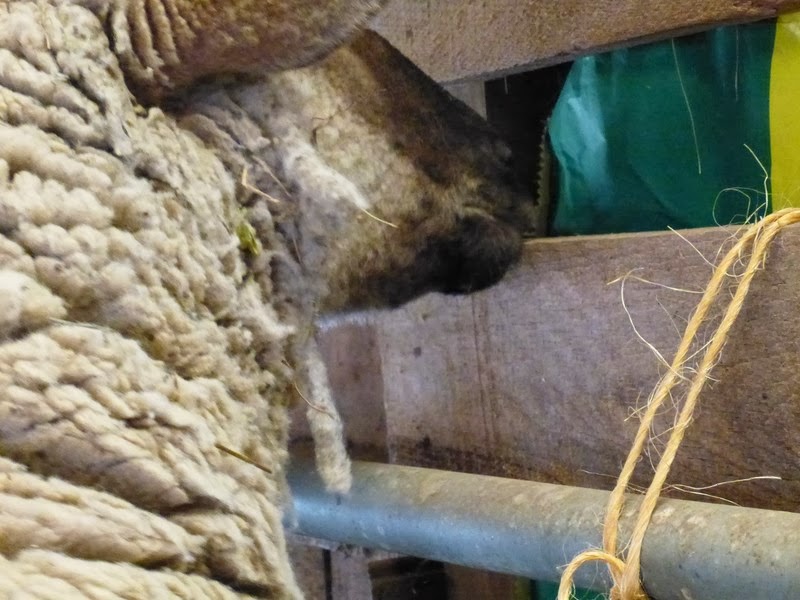 That didn’t stop her.  She simply moved the feed sacks with her mouth, and kept on eating hay. 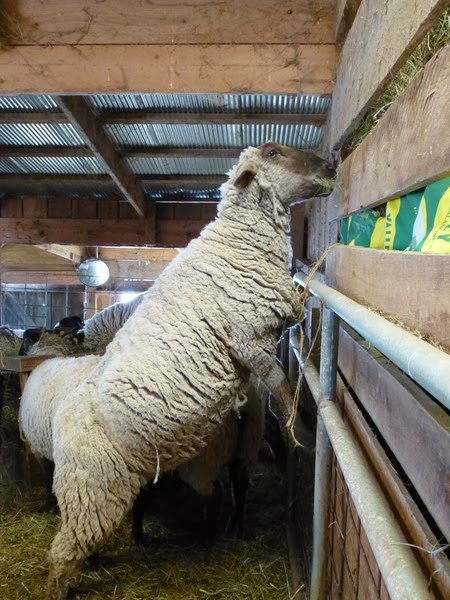 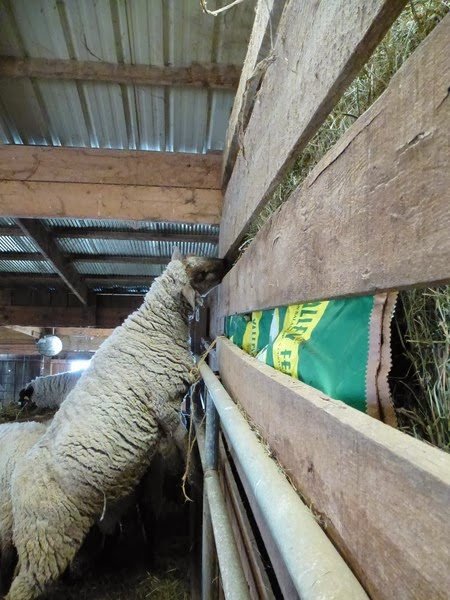 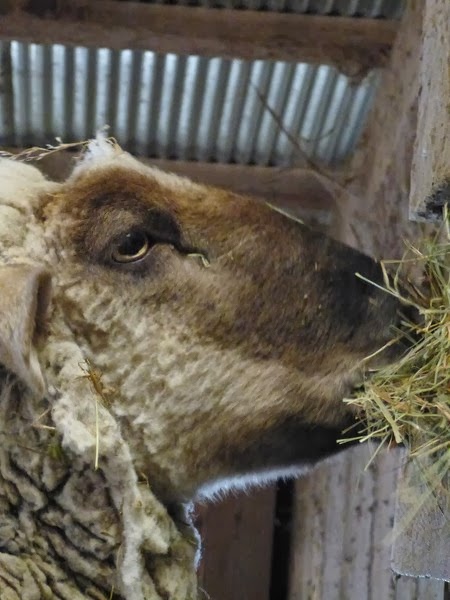 …and turned and looked at me as if to say…”Hay…this is pretty good!  HA” 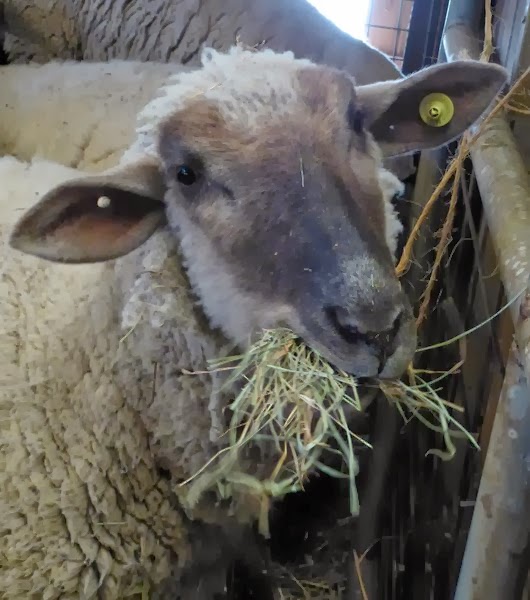 Yelling, cajoling and fussing don’t work. (believe me, I've tried)  And, this hay is too nice and too expensive to waste on one old ewe. So, I moved the hay bales out of reach. That messed up the nicely stacked hay, but at least she couldn’t get to them anymore.

I guess this one ended up a draw.

But, I did get the last laugh when I crawled up on the pile of hay and took this picture.