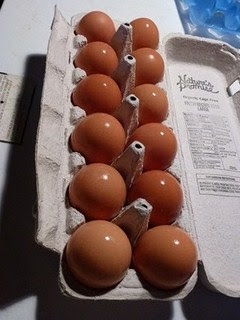 “Have you heard?”  a longtime customer-friend was hurrying toward me, waving an egg carton.

I have to tell you something!  Have you heard what goes on in the industry?  Mad science, I tell you…science fiction!”

Okayyyyy….I waited for the rest of the story.

“you know you told me chickens will live and lay eggs for years…?  I saw this guy on television and he said that in the industry they only lay for 72 days and then they are so spent that they kill them off!” She was becoming more and more agitated. The other customers looked a little concerned.

What?  What are you talking about?

While I keep up with all sorts of Ag news, I had absolutely NO clue what she could be talking about. I keep up with the news because all those regulations and “issues” meant for Big Ag eventually trickle down and affect the small producers as well.  Since we direct market everything, it pays to at least be conversant on the topics of concern to our customers.

She took a deep breath and started over.

Apparently, she was watching some news show.  She couldn’t remember which one and in the big scheme of things it really doesn’t matter.  The host was talking about eggs and the egg industry and how awful conditions are for the hens. (here I know I groaned…I thought it was mental, but the look on her face told me that she heard me… But, Dear Lord, I HATE those one-sided stories!) Customer-friend has a real fascination with chickens and eggs and production.  She keeps bringing me stories that concern her and I keep trying to de-fuse the situation. Those so-called facts that you see on the Internet, spouted by animal rights groups and then often repeated by your best friend’s third cousin (or someone else) are majorly erroneous.

72 days!  72 days!  She kept saying it.  Why would they only keep them for 72 days?  That’s horrible!  I will never buy another egg from the grocery store!  You wouldn’t do that, would you?  Isn’t that awful?  How can they do it?  It’s awful…you should tell people that you don’t do that!

Well…I really don’t think they do that in “the industry”, either.

Her eyes widened as I continued…

You see, it takes 16 to 22 WEEKS for a chicken to develop to the point where she can lay eggs. For a producer to keep the animal for mere days would NOT be economical. I honestly think the speaker mis-spoke or you misunderstood.  The average productive life of a chicken is anywhere from 1 to 2 years.  The most frequent replacement schedule is about 1 ½ years…that would be a little more than 72 WEEKS. Yes, a chicken will live for a long time…a very long time.  But, once that first flush of egg laying is over, the hen will never produce at that level again.  If eggs are your cash crop, you must have a productive flock that you know will lay eggs at a predictable rate.

At this point, she calmed down a little bit.

Those cartoon images we remember from childhood gave a completely false sense of egg production! A hen will lay an egg about every 26 hours, whether I want her lay more to or not. You can only push SO hard.  As the animal ages…the timeframe becomes longer and longer. The laws of nature cannot be completely changed.

…and while it is true I said a hen will live for a long time, I never said, nor implied that we keep them that long.  We work on a two year replacement cycle.  We don’t send the old hens off to some chicken retirement home, either. At the end of that time, we either sell the hens to small flock owners who are not concerned with predictable production or we take them to the local zoo where the big cats can enjoy eating "local".Our operation, just like “the industry” needs some level of predictability.

“Well, I still don’t like the industry!” she asserted.

At that point, I gave up.  Live to fight another day… I guess.

Stories like this happen all too frequently.  Somebody thought that they heard somebody say something that sounded "kinda bad".  They missed a lot of the details, but made a firm decision anyway.  Then, they shared it with a friend or relative and the erroneous information began to be accepted as fact. More than one urban myth has started this way.  The current cultural tendency to accept information without any real research or proof is completely maddening.

If I could make any one request of the world at large, it would be PAY ATTENTION and check your sources.  If someone, anyone, (including me) says something that you have never heard before, find out if the information has any basis in fact, or if you possibly misunderstood, or if the speaker/writer has any credible experience with the subject.  It is also possible that the source is just looking to stir things up.  But, if you have no personal knowledge of the subject…you cannot make a good decision just based on what is essentially hearsay. Do some homework, for your own sake!

Because, quite honestly…there’s a whole lot of mis-information, falsehood, mis-conceptions, false perceptions….just plain lies out there….particularly when it comes to Agriculture.