An Unexpected Change in Plans 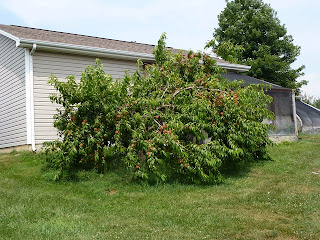 I have been keeping a close eye on the peach tree behind the shop. Loaded with peaches, the branches were beginning to sag long before we could even think about picking.

The hot, hot temperatures combined with the hard, heavy rains we have had in the past week caused the peaches to grow larger and begin to ripen quickly.

Apparently, the pesky bugs have been keeping an eye on the peach tree behind the shop, too. No sooner did the peaches begin to ripen than the fig beetles, Japanese beetles, flies, yellow jackets and the like descend on the tree. It was going to be a race to see who would be the winner in harvesting the peach crop.

Finally, another heavy rain forced us to take action. 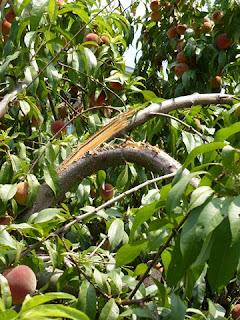 The weight of the rain-soaked peaches broke one of the big limbs. All the peaches were stressed into ripening. The bugs moved in for a tasty meal.

Despite the fact that we were unprepared for storing peaches, and it was not at all what I had planned for the day, I began picking. We would figure out where to put the peaches after they were picked. I got about 10 quart boxes filled when I thought I heard raindrops on the barn roof. Since there hadn’t been any rain in the forecast, and it didn’t look threatening, I kept picking. It kept raining, harder and harder and...well, you get the picture. By the time I got the boxes of peaches crated and inside, they were soaked, I was soaked. Maybe I needed to re-think this project!

The rain continued. Since we need the rain, I am NOT complaining. A quick check of the radar showed that the rain was right over us and would probably continue for some time. Okay…now what? 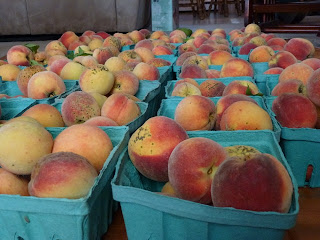 We put down a tarp (a brand-new, clean tarp) and put all the boxes of peaches on it. I planned to continue picking once the rain stopped. When it finished raining, we had gotten ¾” of much needed rain, but the remaining peaches were completely soaked. They would have to stay on the tree to dry, as we were concerned about the moisture causing them to rot.

The next morning I got back at it. It was a little discouraging to see just how many peaches were injured by the heavy rain. On the up side, there were a good number that had escaped unharmed. I put the damaged ones aside for freezing.

The race with the bugs ended in a draw. They got far more peaches than I would have liked, but we were able to salvage some very nice peaches for tomorrow’s Market.

The fact that there are forty-five quarts of peaches in the middle of our living room floor doesn’t bother me. I’m fairly certain this particular decorating idea has eluded even the best designers. 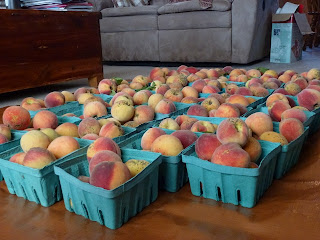 So, “eat your heart out, Martha Stewart!”
Posted by Barbara at 6:29 AM