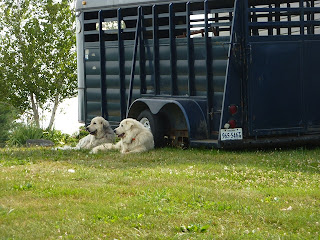 According to Wikipedia…."Dog Days" (Latin: diēs caniculārēs) are the hottest, most sultry days of summer. In the northern hemisphere, they usually fall between early July and early September. In the southern hemisphere they are usually between January and early March. The actual dates vary greatly from region to region, depending on latitude and climate. Dog Days can also define a time period or event that is very hot or stagnant, or marked by dull lack of progress. The name comes from the ancient belief that Sirius, also called the Dog Star, in close proximity to the sun was responsible for the hot weather.

That sounds about right. It’s hot, sultry, and humid. Everything (including the farmers) seems a little stagnant and dull. But, it is July in the Shenandoah Valley. While the temperatures are very hot and very uncomfortable, they’re really not too much out of the ordinary.

Everyone is talking about the weather (even me!) There is nothing we can do about it, but it seems to help if we commiserate with one another about the current conditions. The newscasters and meteorologists are making a very big deal out of a regular part of summer. It’s a natural occurrence, and it would seem that commonsense would dictate how to deal with it. The constant focus on instructions for dealing with the heat and humidity in some ways make it seem far more worrisome than it actually is.

The hottest part of summer coincides with the beginning of the most productive part of the garden season. The tomatoes and corn begin to roll in, joining the squash and cucumbers in record numbers. It is the season for making tomato sauce, pickles, relish and canning everything in sight. The picking and processing are just a part of the workload. Planting for fall crops and planning for overwintered harvests can’t be dismissed. There’s a lot to do…can’t worry about the heat.

Someone asked me how we were able to get any work done in the heat. My answer was…”we sweat a LOT!” We don’t glow or even perspire…we SWEAT! I always know it’s time for a drink when my shirt is so saturated that I can no longer wipe my face and my glasses start sliding down my nose. A drink, a towel, and a quick cool-off in the house and I’m ready to get back at it.

With plenty of shade and drinking water, the animals don’t seem to suffer. They generally hang out in the shade in the heat of the day, grazing in the morning and evening. The dogs find the coolest spots possible, 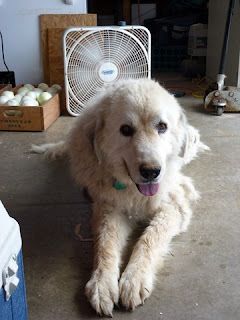 pass out for a while, and “spring” into action at dusk.

This heat is not going to last forever. All too soon we will all be commenting and complaining about the cold. But by that time, we will be enjoying all the fruits of our labor during the summer.

The “dog days” are nothing new, nothing scary or indicative of impending doom. It’s just another part of the year, named for the “dog star”. 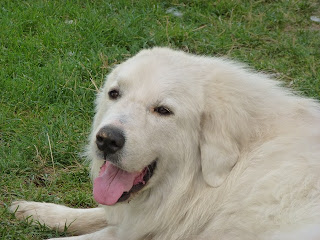 … and all this time I thought the name referred to how it is so DOG-gone HOT!
Posted by Barbara at 6:15 AM