In an attempt to FINALLY move the sheep out on grass and wean the lambs, we put them all out in the upper front paddock yesterday after breakfast. The move was uneventful, although they all seemed quite happy with the deep green grass. 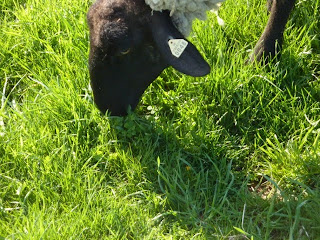 A word about the upper front paddock…it is right in front of the house. This makes for picturesque views from the front porch in the summertime. It also makes it easy to check on any troubles that may arise. There are several paddocks out front, and once weaned, the lambs will be rotated between them.

Everything was fine at dusk when I went out to close the chickens in for the night. (They are closed in their house as a protection from predators). The sheep were grazing, snoozing…just being sheep. . 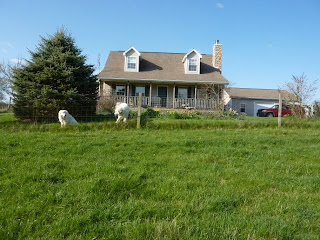 About one o’clock, I heard a lot of noise outside. (I made the mistake of drinking two glasses of sweet tea while we were out to supper and sleep was eluding me. I was finally beginning to doze on the couch.) I recognized the noise, but my brain was just sleepy enough to be quite slow in processing data. …the SHEEP! Then, the dogs began to bark.

Jed has an incredibly bad habit of lying in the front yard and barking at odd noises in the night. His present irritant is the family of foxes that live in the woods down the hill by the creek. They can be heard yipping in the night, and Jed barks at them constantly some nights. Tom finds this horribly annoying. I’ve had words with Jed, but to no avail.

The barking was a different tone than his usual woofing and then Ellie Mae joined in. Their barks sound like the rumble of thunder and then become full-scale barking when they sense a real problem. I got up to see what I could see. As it was a full moon, I could actually see a lot. It appeared that one, or possibly several lambs, had gone back to the barn for a drink from the stocktank. This is normal behavior. Unfortunately, the lamb must have realized it was alone and panicked. When it called out, the mother answered from far away. Then the lamb really flipped out. It began screaming and running. Suddenly, sheep everywhere were baaing, and the dogs were both barking. The ruckus got the neighborhood dogs going. The peace and quiet of the country night was utterly destroyed.

I grabbed the flashlight, put on my boots and went out back. Ellie Mae seems to think it’s wonderful when I come outside in the dark. She was cavorting about, eagerly accompanying me to the barn. The light of the full moon made it easy to see that there was nothing amiss at the barn, so I headed out front. 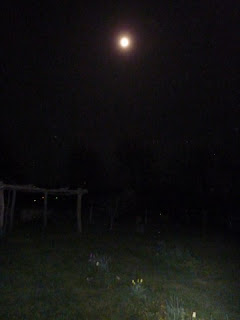 (those glowing orbs are sheep eyes)

When the light from the flashlight swung around the paddock, I still could find nothing wrong. The older ewes seem to remember that the flashlight means food on early Market mornings. They all came running toward me. They all proceeded to the barn, where they continued to fuss for some time. It looked like they were all present and accounted for. I headed back to the house. 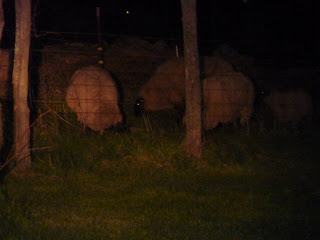 After a few minutes, they realized they weren’t getting grain as a “midnight snack” and they headed back out to the paddock. End of adventure…quiet returned to the farm. Ahh!
Posted by Barbara at 6:38 AM