It is very easy to get all too caught up in the work to be done and the busyness of life on the farm to ever begin to enjoy it. To ensure that I don't get too bogged down, I try, really try, to find time to appreciate the ridiculous things that happen around here.

I was standing at the kitchen sink the other afternoon. The window over the sink faces the backyard. From there I can see the flower garden and birdbath, the barn and back corral, and this time of year…I can see all the way out to Middlebrook Road. I have been astounded at the number of odd things I’ve seen while gazing out the window. This day would prove to be no exception.

Suddenly, from out of nowhere, the dogs galloped into the backyard, barking furiously. I assumed it was another skirmish in the ongoing “battle of the crows”. Not a crow in sight. They were quite adamant about some type of problem, so I went to the back door. As I opened the door, a chicken flew up out of the flower garden, clucking in terror. 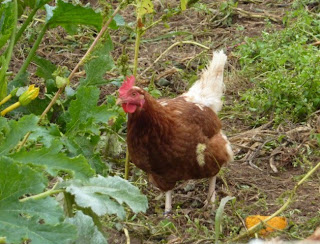 The dogs were not chasing her, they were barking about the ruckus. I called Tom, and headed out to corral the chicken. As I approached the flower garden, a CAT jumped out! 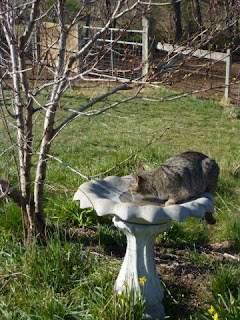 Apparently, the cat must have seen all those Nature specials we’ve been watching. He was stalking that chicken just like a lion would a gazelle. He would crouch down and pounce out at her. Then, his sister joined in the “hunt”. When I yelled at the cat, the dogs got excited and began romping all about. They never tried to bother the chicken, but they were going to take on the cats.“Boooyyy” (that’s how his name is pronounced) got down to stalking again. He was even doing the little hunting twitch like the big cats. Tom was focused on capturing the chicken. The chicken was in no real danger; she is larger than the cat. But, we did need to get her back in the pen. 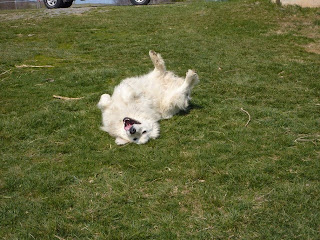 Then it hit me…the sheer ridiculousness of the situation just got me. Here is this poor hen, dumber than a post, trying to get back to the other chickens. She is being pursued by two cats, two dogs and two humans. It was no wonder that her clucking turned into shrieking as she ran first one way and then the other. I couldn’t help, I just couldn’t….I was just laughing too hard. Sorry, Tom!

Finally, the hen was captured, the electric fence re-energized, and all was right with the world again. If laughter is indeed the best medicine, I’m good to go for quite some time. 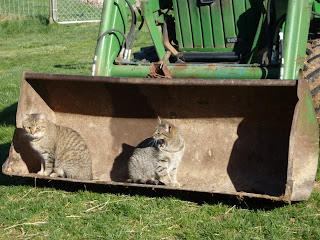