My days rarely go as I plan them, and yesterday was no exception.

Morning chores revealed that we needed to follow up on “working the sheep”. I told Tom, but I completely forgot as I was so focused on making the most of the spring-like weather to get some much needed planting done. Perhaps I conveniently forgot…we were following up on the castrations of last week. Blech! Since Tom is the brawn of the operation, I get the stinky part of this job. Sometimes it does NOT pay to be the “brains”!

When he reminded me, we realized there were several other things to do with the sheep. Jimmy Dean (the baaaaby) needed to be tagged and banded as well. I had intentionally skipped this task, as I really questioned “Jimmy’s” survival and I didn’t want him to experience too much pain at one time. Like it or not, banding the ram lambs does cause some level of pain.

With that in mind, I took “Jimmy” his bottle a little early. Lambs find a sense of security in suckling….and OK, I am a soft touch! (call me a sissy or a wus...I won't argue, this time)

While I sat there holding the bottle for Jimmy, I saw it happen. There was absolutely NO denying it…they were planning. I could almost hear the plot in their cheeping. Yes, the chicks were apparently planning the “great escape”. Dare I say they were “hatching” a plot? Nah, way too corny! 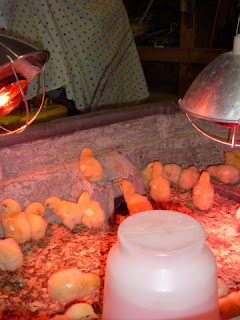 First, “Big X” hopped up on the ledge. 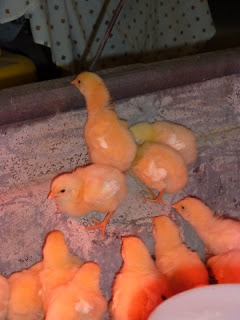 He scoped out the situation and apprised the others.

“The Tunnel King” checked out the tunnel 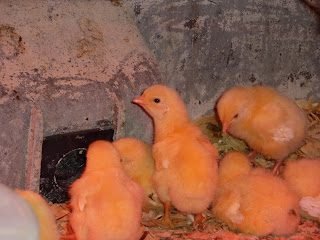 nope, they’d have to go out over the wall, men! 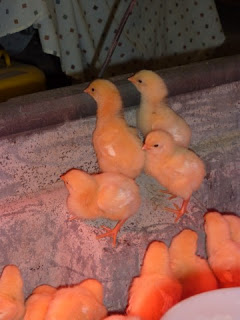 “Intelligence and the Surveyor” added their observations to the situation. “Headley” suggested flying…unfortunately, he forgot he didn’t have his feathers yet….he crashed down.


They checked it out over and over. Conversations of escape routes continued on through the ranks. 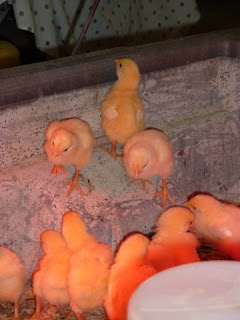 Too bad, guys, I already saw the movie! While I really didn’t like playing the part of the prison guard and thwarting the escape, it had to be done. Last summer we had turkeys in the shop, and one kept escaping and pooping on Tom’s garden tractor. This did NOT set well with the establishment!

At first I thought I would just cover the stocktank with chicken wire. I was wandering through the barn with this roll of wire, trying to decide what to do when Tom saw me and had to hear the story. He had another suggestion, but it was majorly involved. The problem was that they were going to get on that little ledge no matter what, so I found another tub. 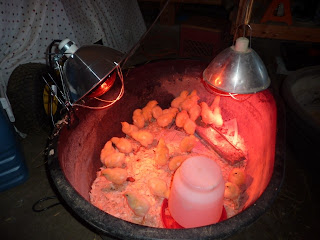 There was quite a commotion when the would-be escapees were rounded up and placed them back in the stalag. They should rejoice….I could have put them in the COOLER! (all in due time, chickies, all in due time)

Despite the diversion of the attempted escape, we still managed to get all the planting done! Who says you can’t work hard and STILL have fun?

(my apologies to the cast and crew of the 1963 classic movie)
Posted by Barbara at 6:47 AM