An Ode to a Ram

(okay, it’s NOT an ode, because poetry is NOT my strong point!)

Every shepherd knows that your ram is half your flock. Sounds like an overstatement, doesn’t it? But, when you think about it, you realize that it is quite accurate.

A good, mature ram can easily breed 50 ewes. That means his genetics affect ALL the lambs. Each ewe generally only has 2 lambs a year. So, in reality, the ram is the most important investment a shepherd can make. Our experience in shepherding has driven this fact home. Of course, we had to learn the hard way. Once, just once, I would like to learn the EASY way!

We have had a number of rams over the years. 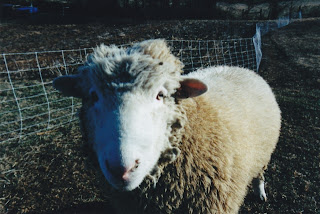 We had a Dorset ram when we first started out. He was big and ornery, but a good ram. His biggest fault was his feet. Dorsets are notorious for their hoof overgrowth. He ended up with these “elf feet” that turned up at the ends. Overgrown hooves mean sore feet; sore feet mean he can’t do “his business”. That meant he needed a hoof trim fairly often. Try doing a pedicure on 250+ pounds of ornery….NOT fun. New breed?

Our next ram was a Cotswold. 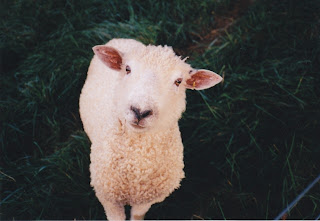 At that point, we wanted to follow the wool route with our flock. What a disaster! “Stanley” was quite small and apparently not too fertile. The only thing he had going for him was “cute”. Not particularly a good word to describe a stud animal! Okay….switch breeds again. But, wait…maybe we can do wool AND meat. We’ll just have two rams and two separate ewe flocks. (yeah, right)

This time we got “Mac”. He was a big, showy Suffolk. 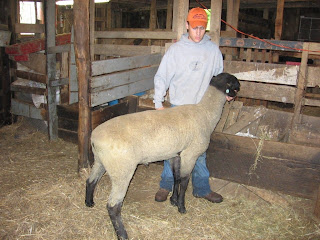 He was a good-looking ram that had spent his early days in the show ring. He was quite gentle with people, but not with the other sheep.

Apparently, he and “Stanley” got in some sort of tussle, and Tom found “Stanley” dead one morning. Not a good way to start a day! 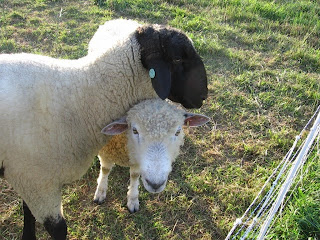 “Mac” had his own set of fertility issues, so we began looking for another ram.
We have friends who have the best looking flock of sheep I have ever seen. This is where we have gotten a lot of our stock. They had a bunch of ram lambs one year, so A and I went to check them out.

The producer was showing them all off. They were a great looking bunch of lambs. The producer has a line he loves to use. “Yeah, when you’re lookin’ for a lamb, ya wanna look for a big butt and good shoulders. …and…that’s what the wife was lookin’ for when she found ME!” This always gets a laugh….correction, this gets a laugh from the listener and the “oh, husband! eye roll” from the wife.

We found a ram we liked (A claims picking him, but then so does the producer) and took him home. 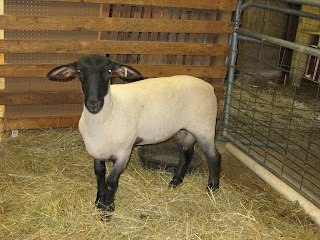 He was young and wild and A dubbed him “DUDE”. He grew out beautifully. He ended up being about 300 pounds of testosterone. He once took out a fence, just because he was bored. But, what a DUDE!

When we turned him in, he went right to “work”. Five months later, we had our first batch of gorgeous lambs. Just about every lamb he sired has been exceptional. They are healthy and hearty at birth, and grow out quite nicely. Since we were having such good lambs, we really wanted to keep some of the ewe lambs back as breeders. Once you start doing that, you need to think about a new ram. After four seasons with “DUDE”, it was time to look again. 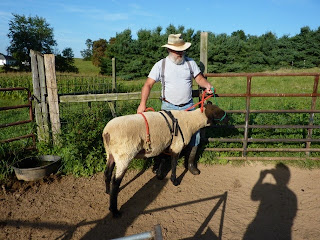 The producer we got him from wanted him back as a trade, so we get first pick of this year’s lambs. I am anxiously awaiting the call to go pick out “DUDE’s” replacement.

I will probably always miss Dude, just a little. He was a great ram. We have some great lambs from him. 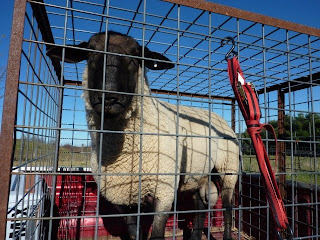