Tom insists that it is difficult to buy presents for me. I don’t know why he thinks this, but he IS entitled to his opinion. However, a couple years ago, he bought me what is quite possibly the greatest birthday present EVER.

I carry it with me daily, feel lost if I somehow forget it, and all my jeans have a mark on them from carrying it. I have used it in nearly every aspect of my work. How did I live without it?

Have you guessed what it is? It’s my Leatherman, of course! 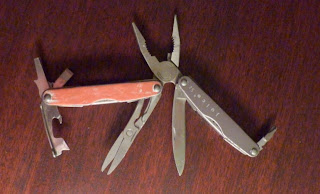 I used to watch Tom play “John Wayne draw” with some teenage friends and laugh at their antics. They all carried Leatherman tools, big ones. Each had a holster, and it was a big game to yell “DRAW” and see who got their tool out first. It was raucous, silly and done EVERY time we saw them. Everyone has since grown up ….kinda sad.

It seemed a handy tool, but far too unwieldy for skirt pockets. When I got back to blue jeans, I began to wonder if a pocket tool wouldn’t be handy. I am forever misplacing the barn tools and it’s such a hassle to go looking for something in the barn when working elsewhere.

For my birthday a couple years ago, Tom got me a Leatherman of my very own. I personalized it with bright orange nail polish (after dropping it in the hay and fearing its loss). I had no idea at the time how dependent I would become on my own little tool. I began to carry it all the time.

I was talking with Son-in-law #2 (he was just “the boyfriend” at this point) for my birthday that year. I told him about my great present. He was impressed and we talked about farm tools a bit. My wonderful Leatherman wasn’t mentioned again until his graduation party in the spring. When he was in the midst of opening presents and cards, someone suggested he needed a knife to cut the ribbons and open everything. Without thinking, I reached in my pocket and got out my Leatherman. (told you I carried it everywhere) He and our daughter exchanged odd looks and I distinctly heard the word “weird” whispered between them…but, he got his presents opened!

Thanks, Boss! I think of you whenever I use it!
Posted by Barbara at 6:15 AM