…every other day here on the hill.

I’m certain we’re seen as “grinchy” or “scrooge-like” because there are no Christmas decorations. There are no special holiday goodies, no carols and no presents. No, not even one.

It’s hard to explain and even when we do there is little if any comprehension by the listener. How can you just “NOT do Christmas”?  Believe me, it’s no easy feat.

I would like to hibernate (completely) from the day after Thanksgiving to New Years day, avoiding human contact. That way I wouldn’t feel like a complete and utter freak or a veritable heathen. But that’s next to impossible.

And, while it is quite possible that some sort of explanation would help, I have yet to find the words that explain my convictions and beliefs without being offensive to someone else.

I feel uncomfortable talking about it with other people. The whole topic is incredibly divisive, and we’ve had more than one person get overly irate at our beliefs. (or lack thereof) We’ve never tried to proselytize anyone or “correct” their own beliefs. (well, it is entirely possible that it sounded like we were sermonizing, or trying to change someone’s mind when we’ve made attempts to explain) Our children have developed their own celebrations with their extended families. (with our blessing, I might add) Honestly, most of the time, we try to avoid the conversation at all costs. (which, I am sure has led to more than one serious mis-understanding)

When you strip away all the commercialism, the myths/legends and the mish-mash of religion of the holiday as well as all the pagan traditions, you are left with…well, just another day in winter. And, while the festive nature of the season is appealing, and the special treats and colorful decorations are both delectable and delightful, we choose to leave the celebrating to others.

And, I really hope that everyone can understand that!

So…it’s been just another week of quasi-hibernation here on the hill.

December is a rather dull time around the old homestead. Everything and everyone seem to be in a waiting mode. That won’t last long. We will spend the last week of the year plotting and planning for next season. The ewes are actually in count-down mode (if sheep could count) until the lambs start arriving the first week of January. We should be thinking about putting something in the hoophouses, but the weather is supposed to turn bitterly cold, so more waiting may be prudent.

The Boss has been using the slow time to do those small jobs of maintenance and repair that get overlooked during the season. Which explained the ladder sticking out of the barn the other day. By changing out the light fixtures, we can be far more energy efficient and have better illumination.  This will be incredibly handy during those middle of the night lambing sessions!

And, speaking of sheep…the ewes spend the winter grazing next to the house. There’s not much grass left at this point, so they just wander out and enjoy the view as they ruminate. One of the nice things about having them so close is that I can observe the flock without trekking out in the weather. As a matter of fact, I can see them from the kitchen window. And, it seems that I spend an awful lot of time at the kitchen sink.

But more than once I would look out the window only to think there was something amiss. It wasn’t until I had hurriedly thrown on my coat and boots and rushed out the backdoor that I would realize there wasn’t a problem at all.

In my haste to tidy after the house-cat, I dumped the kitty litter over the fence. Now, that seemed like a good plan at the time. The clay would suppress the weeds along the fence-line. The cat scent might deter varmints.

However, after a few rains, the pile began to transform. It melted and molded to the tree roots. From the kitchen window, it began to look very much like a sheep in distress. After too many hurried trips out the backdoor only to laugh at myself, a clean-up job was in order.

Winter wildlife sightings become more common this time of year, due in part to the lack of leaves on the trees. The starlings fill the trees along the fence-line, eagerly awaiting the opportunity to swoop down and eat chicken feed with the hens. It is quite possible that they eat more than the hens do. And, it is understandable why it became the standard practice to raise chickens in poultry houses. The conventional farms that raise hens indoors protect them from the elements and any animal-borne illnesses. This also maintains a consistent rate of production by adding light and heat, while we contend with lowered production brought on by the lack of daylight during the short, cold days of winter. All these factors mean higher production costs and that LOCAL egg prices are indeed higher than those at the grocery store.

The deer have taken to grazing neighbor’s field at dusk. (or the middle of the day, they’re not picky)

They are out so often that Gus has apparently accepted them as part of the landscape and has stopped his incessant barking (well, most of the time).


The same cannot be said for squirrels.


Gus does NOT like squirrels. Maybe he thinks they’re saying rude things to him when they “cut” in the highest branches. Maybe they drop nutshells on his head. Quite honestly, if I was a squirrel stuck in the highest branches while a gigantic dog barked at me while trying to climb said tree, I might say some rude things too. (and throw stuff, too)

The other morning there was a great commotion coming from the end of the orchard. Gus was losing his mind over something. And, I kept hearing this weird noise. When I went out to investigate, Gus was trying to climb the tree. Seriously. He was putting his front feet up in it and attempting to jump up into the lower limbs. Unsuccessfully, I might add. It looked truly ridiculous. 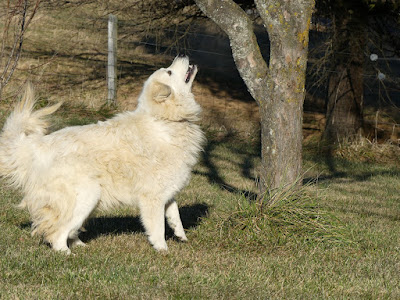 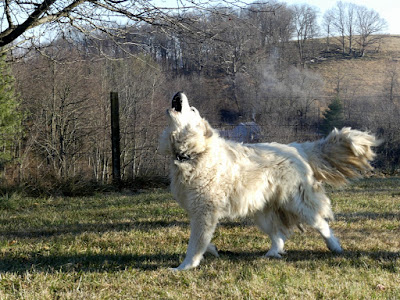 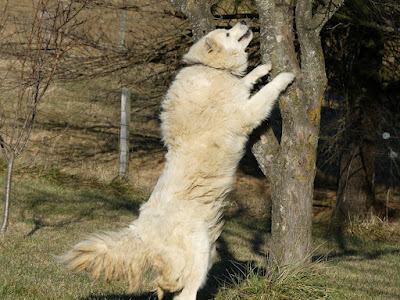 There in the very top of the tree was a squirrel. A very angry squirrel.

The weird noise I kept hearing was the squirrel’s distress call. Did you know that squirrels have different sounds they use to communicate?  You can listen to some of them HERE. The stand-off went on for hours until Gus got distracted by something going on down in town. I can only assume the squirrel took advantage of the opportunity and headed for safety far, far away. I haven’t seen him since. (or any bits and pieces, so I'm sure he's fine)

The rest of the week was completely uneventful.

On Saturday, we made our final sales delivery of 2017. Not only was it a very good sales day, it went off flawlessly. And, we didn’t have any snow to contend with this week! We even got back to the hill ahead of the rain.

Our customers are great!

Which is what we will be doing in the next week, as we plan the gardens, inventory the supplies and place the seed orders.

As the cycle of life continues. 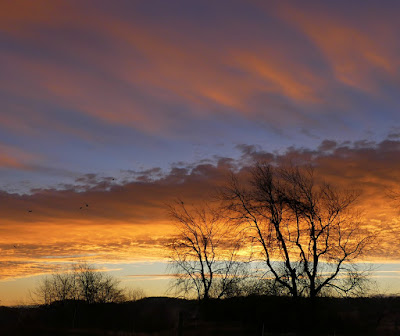 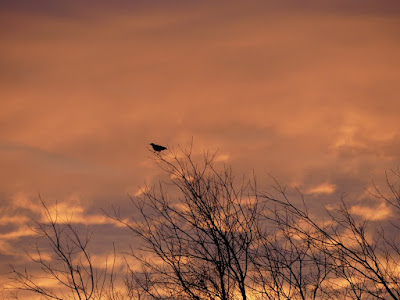