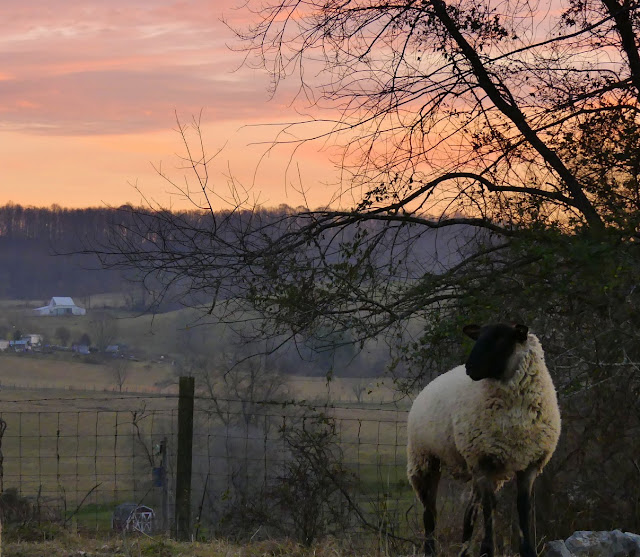 It should come as no surprise that things around here are unlike things elsewhere. I mean, did you read THIS?  Not only are we somewhat “unusual”, the topics of conversation can be unique, to say the least.

Believe me, I get some odd and random texts/messages that would cause great consternation if sent to the wrong address.

And, sometimes they even take me by surprise.

For weeks, I have been telling the Boss about this one hen. Every day she escapes. The exact egress point is yet undiscovered.

And, every day, I find her wandering in the garden, clucking to herself as she scratches through the spent broccoli plants. I tried chasing her, but the grass has been slick with frost and my progress impeded by coveralls and chore boots. Apparently, my concerns for her safety were unwarranted, because her adventures continued. Since he wasn’t worried about it, and I’m not a big fan of chicken-chasing, I let it go.

As a matter of fact, the Houdini-hen was the last thing on my mind as I stood in the check-out line in town. To pass the time, I opened my phone. To find this… 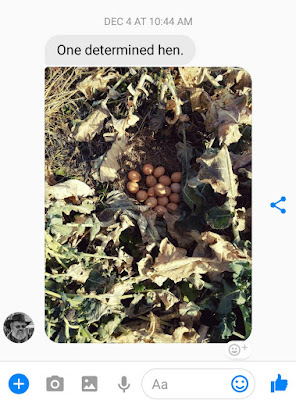 It took me a moment to realize that it was a photo of eggs under broccoli plants. Okay…but, WHAT? WHY?

With an eye to some wintry weather headed this way, the Boss was tidying the garden spaces while I ran errands. The irrigation tapes were removed, the temporary fence stored away, and the spent crops mowed. As he removed the irrigation tapes prior to mowing, he found a clutch of eggs. Seventeen eggs, in fact.

Now I understood. There was a real purpose to those daily garden trips. Ms. Hen had found a tidy little spot to deposit her eggs. (Now, before anyone gets concerned, those eggs did NOT end up in this week’s sales delivery…or any sales delivery) How and/or why she chose to walk all the way up there when there is a perfectly nice nestbox in the henhouse is beyond me.

Well, at least that mystery was solved.

But, there is a postscript to the story.

The next day, there she was…clucking along in the upper garden.

She came to the freshly mowed broccoli bed. She looked around, squawked loudly…turned around and headed toward the hen-yard.

…and she has not escaped since.

Thankfully, I can scratch hen-chasing off my to-do list!

All week, the forecasters talked about the “s” word. First it was going to snow. Then it wasn’t. Wait, it might…

I’m not a big fan of winter weather. Snow or frozen precipitation makes things hard on man and beast, but we really need the precipitation, so as long as we are prepared, it’s not usually an issue.

This week marked the beginning of our “off-season” sales program. Saturday morning would find us heading to town to deliver the items that customers had requested following our mid-week email.
And, any sort of precipitation was supposed to start on Friday afternoon.

So, the weather became a prominent player in our plans.

At first it looked like a “classic I-81 storm”, predicted to slide up the Interstate and deposit the majority of the snow on the other side of the mountains. No, wait…make that I-95…and that track would take the storm even further away and it wouldn’t impact us. Then, the update…the storm was tracking further west, making it an issue again. Hang on…it looks like a miss…

We couldn’t simply skip the sales. The whole reason we do winter sales is to keep some sort of positive cashflow during the winter. But, if the weather did turn, we would have to do something different…should we re-schedule? Surely, it wouldn’t be that bad…there was still the chance it would miss us all together…

The email was sent. The replies received. It was going to be a good week! We packed up the orders, all the while keeping an eye on the weather.

We hadn’t seen so much as a flake until we headed out at choretime. By then, they were flying fast and furious. And, we were back to wondering about our deliveries.

I realize this sounds like much ado about nothing. But, our customers come from around the county to meet us in town for their farm products. Their safety is our utmost concern. And, then there’s the lane…

This place is not called Homestead HILL for nothing.

More than one person has made the turn at the mailbox to head up the lane and been daunted by the steep upward incline. We’ve heard “wow! You live on a mountain!” more than once. (believe me, you should have seen it before Neighbor paved it)

Needless to say, the trip DOWN can be just as tricky. Hauling a trailer filled with a full freezer and multiple coolers of eggs could be disastrous…particularly with snow and ice covering the surface.

Should we? Could we?

The Boss started to off-load everything into the Xterra, only to realize it probably wouldn’t all fit. 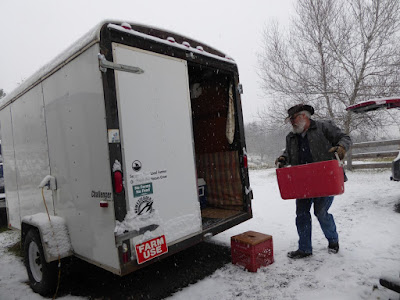 So, we were going to have to take on the lane, with the loaded trailer. 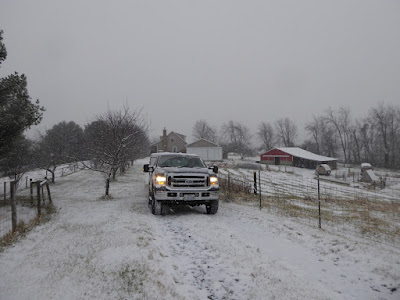 As we headed out, he wondered aloud if I should email the customers…I didn’t want to tell him that would be impossible---I was too busy crossing my fingers! (and I didn’t have the group contact set up in my phone anyway)

We made it to the main road with no incidents.

The trip to town was uneventful and the roads there were clean and clear.


All the customers came. The deliveries were completed without a single error. We headed back to the hill, (conditions were definitely worse out in the county) where we watched it snow for the rest of the day. I must say, snow IS prettier than rain. And, we really do need the moisture.

When it was all said and done, we only got about 3 or 4 inches. Certainly not enough to warrant days of concern. But, all’s well that ends well. And, we won’t be concerned with deliveries for another week. 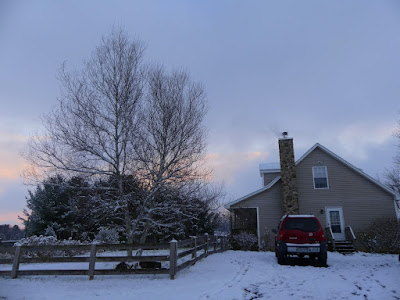 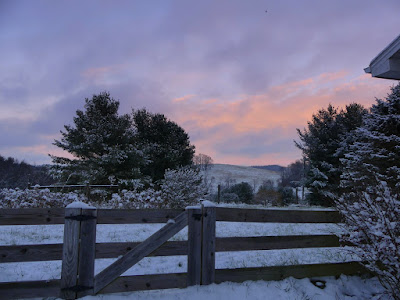 But, Winter weather has arrived. Today the temperature is supposed to hover in the low thirties with wind gusts near 30mph. I guess we won’t have to worry about snow removal, it will all blow away. The forecast for the upcoming week includes more precipitation and frigid temperatures. So, Remy might just have to share her spot in front of the woodstove.

Thanks for stopping by. Come back and “visit” us again real soon.