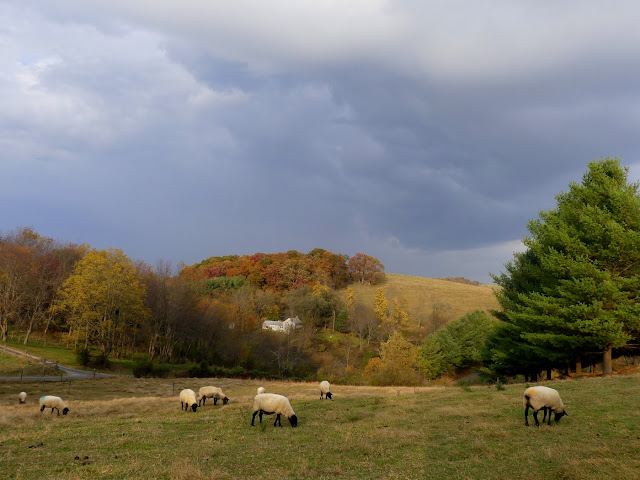 The first of November starts a string of LAST things as the growing season winds down and the Market closes until Springtime, and we head off to hibernation.

Wait a minute. Something’s not quite right there.

Contrary to popular belief, we do NOT hibernate all winter, or go somewhere warm, or even celebrate the OFF season.

Wintertime is not a vacation. Sometimes it’s anything but! We still do farm sales, there are always animals to care for and somehow the “to-do-list” sprouts even more items that demand our attention.  However, life does move at a different pace and we cannot complain that we are bored.

Okay, now that I got that off my chest…

In keeping with the whole cycle of life deal, we processed the last batch of broilers for 2016. The project went off without a hitch and there is a real sense of accomplishment once we get everything cleaned up and the birds packed into the freezer. We will go into the Winter sales season with well-stocked freezers this year.

After we got the processing mess cleaned up, Minion1 came to visit us for a little while. It was a beautiful afternoon so we played outside for a long time. We also made countless trips to the barn as he truly loves his critters and wanted to visit the sheep, look for the cats and feed the dogs one more time. The sheep, however, couldn’t figure out the tiny human who had nothing for them to eat, but seemed to appear every time they heard MY voice. They spent the longest time running to the barn (after hearing my voice) and then turning and running the other way once the“tiny human” appeared.

Wednesday started with fog. And, I mean FOG. It was nearly impossible to see the end of the driveway. Personally, I wasn’t too thrilled with this weather phenomenon as I had an appointment in a town nearly 20 miles from here and driving on the interstate isn’t one of my favorite things anyway. And, the fog just makes it so much worse. However, by the time I got to town, the fog had lifted and it was well on its way to being a beautiful day.

On my way home, I noted that the local corn harvest is in full swing. Harvest in the big field on the corner has been completed and there is very little corn still standing around the “neighborhood”.  That's another sure sign of the season…

While the Boss didn’t have any corn to harvest, he did decide that it was BARN-CLEANING day, and he was just about finished by the time I got back. (not sorry I missed that) Last year’s waste hay will slowly turn into compost for next year’s crops and the barn is all clean and tidy in anticipation of lambing season. (well, as clean and tidy as a barn can be)


…and speaking of lambing season…

It was time to remove the ram harness and hang it in the barn for another season. Looks like the first lambs should arrive just in time for New Year’s Eve. The majority of the lamb chop crop will probably be born about two weeks later. There are eleven ewes due in a four day stretch. The barn is going to be a busy place come January, making me wonder…“Off-season”? What “off-season”?

This is the time of year that we see a lot more raptors (that would be hawks, harriers, eagles and yes, even the occasional osprey) as the birds prepare for winter. And, they enjoy a good chicken dinner as much as anyone else, so we need to keep an eye out to prevent losses. This is perhaps the biggest down-side to pastured poultry. More than once, I have seen a hawk rip a hen to shreds. And, more than once, I have had the hawk look directly at me while it was doing so. I was surprised at my most visceral response to save the chickens. (the thought of battling those big talons did slow me down some) But, since the birds are protected by federal law., they may not be eradicated without special permission.  In other words, you can’t go around killing hawks just because they ate your chickens. Other measures must be taken.

So, when I heard a hawk screaming in the fenceline outside the office window, I figured I better go outside and do a little investigation. Often, the dogs will scare the hawks away by barking ferociously. (apparently, it was naptime…they didn’t even notice what happened next)

The hawk screeched a little more and flew toward the trees out back. Good riddance!

But, before he got there, the local crows got into the act. Now, crows and hawks are not on friendly terms. As a matter of fact, they are mortal enemies…the hawk being one of the few predators of crows. But, the crows don’t just cower in fear like other birds do. Often, we will see the crows chasing hawks. This is called “mobbing”.

The loud caw-cawing and commotion alerts us to any hawk pressure. And, for the record, the crows are not that fond of the chickens, I think they are just protecting their food source.

When the Boss throws away the broken eggs, or the hens lay in odd and random spots, the crows swoop in to have a feast. Needless to say, we have a fair number of crows in the vicinity and it is not unusual to find egg shells in some pretty weird places. Did you read this one?

So, I guess what happened next was to be expected…one of the crows went on the attack. It flew directly at the hawk, they tumbled in mid-air, both shrieking wildly. A wild free-fall ensued and I’m pretty sure I saw feathers flying. Then, it was over as quickly as it started. The hawk flew off toward the mountains, and the crow returned to its tree, caw-cawing in loud victory. And, I just stood amazed, wishing I had managed to capture that one in something other than an incredibly blurry photo.
The hens were safe for another day. And, the rest of the week was pretty tame (read, downright boring) by comparison.

The first Market of November was dark and cold. Really dark and really cold.

And, I don’t think we had even ONE customer during the first hour. However, things picked up and it was a good day. Folks are starting to stock up for the winter months and more than one customer was lamenting their “forced” return to grocery store fare.

Which brings us full-circle to the whole subject of the “off-season”. The last time I wrote about that was five years ago five years ago. So, it might be time to revisit the subject. Maybe at the end of the Market…

Thanks for stopping by. Come back and visit us again real soon.