I must admit, when the dogs woke me at 4am on Monday morning, my first thought was not a cheery one. And, I was more than a little afraid that this week was going to be another one of challenges…

The dogs have distinctive barks for different perceived threats, I can generally tell if they have spotted a squirrel, or they are tussling with a critter, or the neighbor is walking her dogs. But, there is a certain tone, a bark with a sense of urgency that simply can’t be ignored. (even in the middle of the night) So I scramble around for my glasses and flashlight and stumble into the darkness on a fairly regular basis.

As I shined the big flashlight around the top paddock, I noticed lots of eyeballs glowing in the brightness. LOTS of eyeballs. Far more than we have sheep. But, they were big and round and blue (I’ve heard that all predators eyes shine orange…and my experience seems to back it up). A fair number of them seemed to be on the lane, so I wasn’t really worried. I just assumed the local deer herd was on the move again. The rest of the farm was so quiet and peaceful; you could hear the sheep grazing. Since nothing really seemed amiss, I turned to head back inside.

Then I heard something that bothered me far more than deer ever would.

Coyotes were howling somewhere in the distance. The dogs kept up a low grumble that would erupt into a full-fledged bark with each yip. Deer and coyotes...that certainly explained the barking.

Coyotes strike fear into the heart of the bravest of shepherds, but there’s not much you can do armed with only a flashlight. They didn’t sound real close and I had no intention of chasing after varmints in the middle of the night in my pajamas and rubber boots.

I end up going out far too often in the middle of the night in response to the dogs. Last week, they were making a racket so  I went out to see what was going on. They had cornered a ‘possum and it was bleeding profusely.  I thought it was dead, so I left it. I reckon it was just “playing ‘possum”, because the Boss couldn’t find it in the daylight and I’m pretty sure he questioned my sanity/ability to see in the dark afterwards. I began to wonder myself this time as I swatted mosquitoes and gnats away from my face. Leaving the dogs to look after the deer (and the coyotes), I went back in the house and tried not to think about what might actually go on out there in the darkness.

I didn’t give any more thought to my nocturnal wanderings until I got back from town. When I stopped at the gate, I got the sense that something was different. Suddenly, it was clear what had been going on in the darkness.

Along the fenceline  there is a grape vine…a Concord grape vine that has some pretty good grapes on it. It's the only survivor from our attempt at grapes in the early days of the farm.  There aren't many, but we usually have enough to offer for sale for at least one Market. This year the vast majority of the crop was destroyed by the late season cold temperatures, and I already knew there wouldn’t be enough to sell. But, there would be enough for a batch of jam and they were just about ready. As a matter of fact, I had just checked them…

I probably don’t have to tell you the rest of this story... Right?

All that barking and all those eyeballs…I should have investigated.

I’m pretty sure that the dogs were telling me that marauding deer herd was eating the grapes!

Nope, cannot say I’m a big fan of Bambi and his band of brothers out there.

Although the thought of coyotes in “downtown Mbrook” is far more disturbing. Because real coyotes are far more cunning and devastatingly destructive than was portrayed by “Wile-E” of cartoon fame.
Needless to say, I do more than a bit of worrying/praying over the sheep on a routine basis.

And the sheep are front and center in my thoughts during August as we start thinking about the next lambchop crop. During last week's  “challenges”, Angus’ brand-new marking harness shredded into a long, thin ribbon.
I found little bits of bright blue nylon in various locations where the sheep had walked. Now, we’re right smack-dab in the middle of breeding season, so his marking harness is a necessity.

We had just purchased this harness to make changing the marker easier. The marker is essentially a gigantic, square crayon that fits in a special little box on the harness. It is held in place with a cotter pin that slides through the center.

If you have never tried to handle a hot, grumpy, “rammy” ram, a rather melt-y crayon, AND a tiny cotter pin all at once, you might not understand why we were looking for an easier way to manage the process. I guess you’ll have to trust me that nobody wants this job to take too long. It’s dirty, a little stinky and fairly tense. By investing another 25 bucks, we could place the crayon on the harness before getting anywhere near the sheep and effectively lessen the chances of anybody getting grumpy. It was definitely worth the investment.

However, the edges of the nylon straps on this particular harness hadn’t been finished off properly. Once it started fraying, it was doomed. There was no hope for a repair. To say I was bummed would have been an understatement.

I emailed the company on Sunday afternoon. By Wednesday afternoon, we had a brand-new harness…NO charge!

THANK YOU, Premier One!

If you ever need sheep supplies, this is definitely the place to go. And, their electronet has saved more than one crop from the groundhogs. They also stock other livestock supplies and their customer service is GREAT!

Angus put his new harness (and the bright orange marker) to use right away. Within 96 hours, he had all the remaining ewes marked. I think. It’s been very warm…make that downright HOT…and the crayon is melted and mushed down to nothing. We may have to put the whole marker change-out into action real soon. And, I might mention the marked ewes are incredibly orange. I’m fairly certain those marks will still be there when it’s time to shear in MAY. (at least we won’t have to worry about them being visible during hunting season!)

We will have to play the waiting game to see if all the ewes “took”. (won’t know for at least 17 days) But, it looks like we’re well ahead of last year’s schedule. So, fingers crossed!

And, in anticipation of lambing season, the Boss went and got our small supply of alfalfa hay.

When the ewes first lamb, they are put in small pens and given some special treatment, including a special hay. The alfalfa-mix hay is far too rich for them to eat all the time (and we would have to be far too rich to afford it) but, we have found that it gives the new moms a nutrition boost, increasing their milk supply and giving the lambs a good start in life. 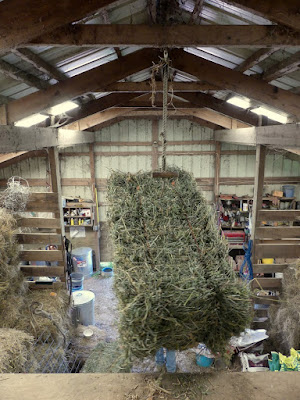 With hay in the barn and a few cool mornings, it was all too easy to start thinking that fall was near. In some ways, I’m ready. I am SO tired of being hot. But, when I start thinking ahead to WINTER, I’m not ready in the least. And, it doesn’t seem like we ever hit our “groove” this summer, although sales have been quite good.

And, maybe it’s perverse on my part, but I’m not quite ready to give up the zucchini. Or maybe it’s that I finally invested in a spiralizer and discovered what all the reason for all the hoo-ha about “zoodles”. 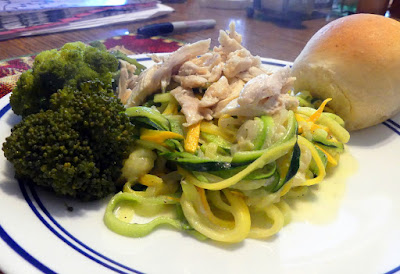 Oh. My. Goodness. Those were amazing!
I’m pretty sure I like food far too much sometimes. 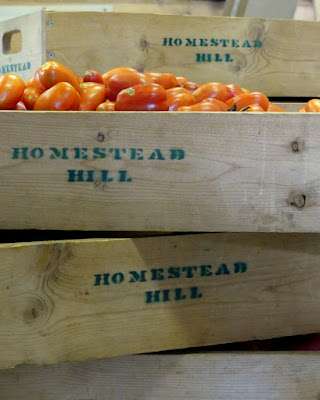 This time of year it is a real challenge to think up something to do with all the abundance from the garden. To that end, we’ve been chopping and saucing and freezing and canning. Now, I need to get on the cleaning/organizing so we have a place to put everything! 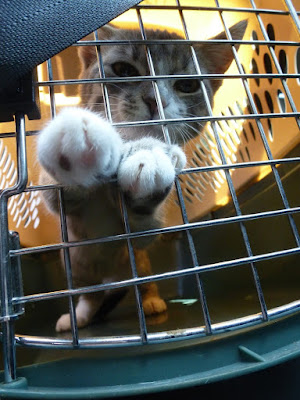 In other news, I had to take Remy to the vet for her final set of vaccinations this week. And, while I’m pretty sure I’ve done this one before…I truly understand the definition of CATerwauling. Ugh. She obviously does not share my affinity for Toby Keith and she yowled and complained for the entire trip. To and from.  But, then she slept in the same spot on the couch and barely made a peep for approximately 24 hours, so I guess we’re even.

She’s very healthy and weighs in at a little over 4 pounds. Not too bad for a little stray who started her farm career underneath the hen house.

There is a change in the light along about the end of August that warns us that seasonal changes are coming. And, although it’s really hard to imagine when the heat and humidity make it feel like it's a hundred degrees…it is not unheard of to see frost any time after the first of September! (I guess all those pumpkins and all that pumpkin spice stuff in the store is not so far-fetched)

With that change comes a natural slow-down in production that gives us time for some much-needed clean up and preparation for overwintering crops. I started seeds for the big, sweet onions for 2017 and it looks like they germinated well. All those little seeds I started last week have sprouted and are waiting to move to the hoophouses.

Looking back over what I’ve written, it appears that I’ve rambled on for far too long about just another boring week of sameness here on the hill. But, even though the oppressive heat (and lack of rain) continues to be a factor, it’s been a far more positive week than last!

We enjoyed another successful week of the Farmers’ Market with good music and lively conversations. Although, I must say, this season I have sensed a real change in the Market that may warrant some serious contemplation in the off-season. But, that’s a story for another day.

…and head off to do chores and find a cool spot to spend what promises to be a very hot day.

Thanks for stopping by! Come “visit” us again real soon.