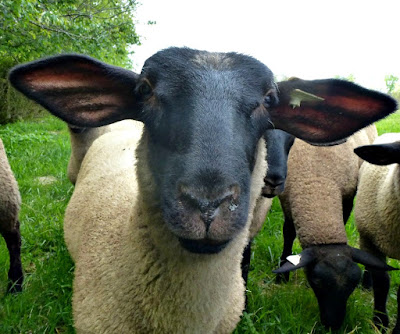 Miz Frances is among the best. She sees herself as just “an old country woman”. But, as such she has some great tales.

She tells the hilarious story of a bad little boy who once hid out under the sofa and darted out to bite the Sunday School teacher on the ankle. Now, Papaw Wally howls in protestation over this one. “It’s a lie! She’s just makin’ that one up! That’s just a big windy tale! You know she ain’t tellin’ the truth!”  But, his insistence serves only to reinforce the veracity of this particular story.

Then there was the long saga of an orphaned baby skunk that she had diligently tried to make a pet only to have it turn on (very literally) the young Frances and spray her in the face. Seventy years after that incident and her stomach still turns at the smell of “polecat”. That one had me laughing and crying at the same time.

You shiver when she tells of shoveling through shoulder-high drifts and you can almost smell her momma’s biscuits baking…  She has countless stories of childrearing and old-time country living and her insights are outstanding.

Once, the subject turned to sheep.

Having grown up in the church, and having numerous relatives that were (and still are) preachers, she had heard all those Scripture passages about the Good Shepherd and all the ones that liken humans to sheep.

It was this knowledge that caused her to lament…

“oh…sheep….WHY did it have to be sheep?  I just don’t understand WHY the Good Lord had to liken us to sheep…

…they are so stupid!

And, I had to agree.

Although, she did serve as my inspiration...

At weaning time, the general chaos here on the hill got a little overwhelming. It was deafening and completely nerve-wracking. No exaggeration.

The cacophony continued all day. The lambs screamed while they were eating…when they were lying down…one even tried screaming while chewing its cud. (that bizarre sound that required a trip to the barn).  It became tortuous to leave the relative peace of the house. (although the office is quite close to the lamb paddock, so it wasn’t a “peaceful” as it could have been)

As the afternoon progressed, it did seem that the noise was fairly persistent. But, honestly, I was doing my best to zone it out. (seriously, screaming lambs could be used as a torture method) But, I did note that one lamb was still out in the paddock when the others were headed to the barn. I was intent on my hoophouse work and thinking of other things. The Boss was mowing the backyard and noticed the same lamb was moving in an unusual manner. He flagged me down to point it out.

We realized the lamb was actually stuck in the fence at the very same moment.

When I headed in to rectify the situation…all the other lambs trailed along behind me. I’m sure it looked like some weird rendition of “little Bo Peep”. As they followed me, they took turns hollering. Quiet life in the country is simply a myth, I can assure you. 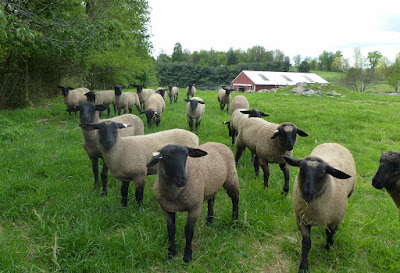 At this point it was obvious that the lamb had been stuck for some time. He was really stuck. Wool pulled from his neck covered all the fence wire surrounding his imprisonment. He was loudly baa-ing in protest. He couldn’t get his head free, no matter which way he turned. I felt a little bad about this, I probably should have checked sooner, but who could tell over the din?

I put my hand out to pull him backwards from the fence. Before I could even touch him, he let out a bellow, turned his head and popped free from the fence. He ran off to join the other lambs that were eating and cavorting in the lush grass. In the blink of an eye he was indistinguishable from the rest of the flock.

He’d been standing there for ages. There was actually a puddle underneath him where he had peed repeatedly. A nervous sheep’s first reaction is always to stop and “take a leak”.

How incredibly stupid can you be? (I think I said this out loud)

Then it hit me.

Caught in a situation we don’t quite understand we thrash and complain and freak out a little (sometimes more than a little) …only to find that we had the solution all along. Yes, I do speak from experience here.

And, it IS embarrassing to be likened unto them. Incredibly so.

You can learn a lot out there with the sheep. I know I have. (click to read THIS)  The very thought that Someone cares for me despite my stupidity and over-reaction is incredibly comforting and lightens my darkest days.

As a believer, who is also a shepherd, I have become far more appreciative of the Good Lord’s continued care and endless mercy. Particularly when I consider the rather disturbing similarities. But, I am comforted nonetheless.

But, don’t tell Miz Frances that I thought of her out there in the sheep field, surrounded by lambs. She’d be sure to say…