For the first time during the month of May, we actually had a stretch of several days WITHOUT rain.
That meant we could work outside. That also meant that the work outside had multiplied exponentially. The weed pressure is intense. The bug pressure is extraordinary.

…and there is grass to mow EVERYWHERE.

The Boss decided that we HAD to tackle the weeds in the onions first thing. Onions don’t handle weed pressure well. They need good air circulation and plenty of water. The weeds harbor pests and disease and inhibit airflow while absorbing the moisture and the nutrients needed by the crop.

Some people use black plastic to hold down the weeds. We have never had much success with black plastic. Weeds come up under it, poke through and render it useless. With all the rain we have had lately, my concern would be holding too much moisture underneath and exposing the onions to rot and disease as the heat of summer builds and is retained under the plastic. Then, there is the wind here on the hill. I can just imagine the mess we would have if even one corner of a long piece of plastic got to flapping around in the constant wind.

Some people use herbicides to hold down or eradicate weed pressure. While this sounds like a simple solution, vegetable plants and herbicides do not mix. Meaning, any fear of Roundup on your vegetables is totally and completely unwarranted, because the herbicide does not know the difference between a weed and a vegetable and will kill everything. There are some natural weed suppressants, like corn gluten, that can be used. However, this needs to be applied at planting time, and loses its efficacy over time.

So, we till to keep the weed pressure down. (which some would argue add to the possibility of erosion and is not environmentally-friendly…a post for another time.) Or we pull weeds.

Weeding by hand is the only option for the onions.
The onions are somewhat delicate and the weeds have invaded the entire bed. And, at first glance it seems more than a little overwhelming.   Like, cue the music to Mission Impossible… But, slow and steady effort makes a big difference. While I rather like the monotonous, somewhat meditative work of weeding, it does take time. Lots of time. Time that could be better spent elsewhere on the farm…and it never (ever) ends.

And, speaking of weeds…thistles are threatening to take over the alley to the barn. Not only are the thistles invasive, they are next to impossible to eradicate. The roots can spread 17 feet horizontally and go 20 feet deep. http://extension.psu.edu/pests/weeds/weed-id/canada-thistle  and, while the flowers are rather a pretty shade of purple…they quickly go to seed and the downy little seeds fly off on the wind and take root easily. We really needed to do something and do it quickly. Now, I’ve done my fair share of “slaying the Philistines” (read  THIS) but, this could easily become a full-time job.

So, maybe we should just go ahead and buy some type of herbicide and spray the heck out of them.

Hmmm? We discussed our options.

I was fully prepared to buy something, anything, just to get the thistles under control.

Personally, I don’t have the concern with pesticides (in this case an herbicide) that many people do. I have read the studies and done a great deal of research. The only reason most people are concerned at all is because they have been thoroughly mis-informed and they are fearful of what they do not understand.  That being sad, we weren’t about to just spray willy-nilly in hopes of getting rid of the thistles. (nor, might I add would any responsible farmer…and all the farmers I know are indeed thoughtful and responsible).  The biggest concern with any of the readily available sprays was the necessity of keeping the animals out of the freshly sprayed area. In some cases, it was weeks.

The alley is the one path back to the barn. And, it is back to the barn that the lambs must go for a drink of water. This trip is made countless times throughout the course of the day, so closing off the alley was not an option.

We have tried our fair share of those homemade remedies in the past with little to no success. And, for the record…that combo of vinegar, salt and dishsoap is NOT chemical-free! Nor is it Organic. (but, again, a post for another time).   However, I had a gallon of cleaning vinegar and a box of canning salt, so I figured I would give it one more shot.

Turns out the lambs LOVED the slightly pickled thistles.


In two days, between the salt/vinegar and the lambs the thistles were completely gone.

…maybe we’re on to something! We'll have to see how long this lasts.

The rest of the week whizzed by in a blur of planting and mulching and seeding…and mowing. I think the Boss mowed grass Every. Single. Day.

The first planting of summer broccoli is in the ground.

The tomatoes and first cucumbers are planted, mulched and trellised.

I got all the beds in the hoophouses re-planted and kale, spinach and arugula started for successive crops.

There was actually enough asparagus to harvest for sale this week. Ordinarily, we have been picking for weeks by this point. I guess that just proves how different this growing season is going to be…

We still don’t have the volume for Market that we have in past years. It has been next to impossible to get into the garden (due to the rain) to plant and the hoophouse crops aren’t producing at the expected level because they need more light and warmth. Even germination has been an issue. New year…new challenges…

Saturday’s Market brought another of those new challenges.

Now, I get all sorts of weird texts from my family members and I’ve been known to send more than my fair share of odd-ness. But, a text that requested “a pair of black nitrile gloves” at 5:45AM did strike me as a little strange.

When I got to the Market and delivered the gloves, the Boss revealed that the wheel bearing on the trailer had blown-out and basically the wheel was falling off. YIKES! He hadn’t been aware of the issue while driving to town and honestly I have no idea how he made it without true disaster.

Needless to say, a trailer without wheels that roll is of no use. The Boss didn’t have the time or tools to fix it during the Market. (the gloves would aid in the greasy job) He envisioned having to unload everything, towing the trailer somewhere and waiting for a repair… 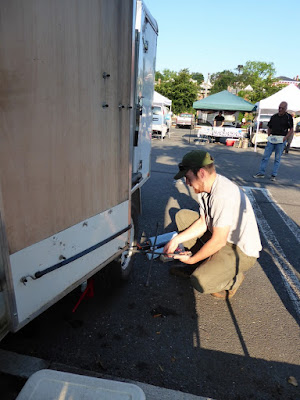 I’m not real sure how Tbone got pressed into service. But, he turned out to be the hero of the day (and the talk of the Market) as he repaired the problem right there on the spot…although he did have a great deal of “help”.


We owe him another big THANK YOU for getting us back on the road! We truly appreciate you, Tyler. And, it was great that Mountain Valley Truck and Trailer was opened and had what we needed. Thanks, Keith!

Since Blake came along with his daddy, I guess he gets some credit for helping us sell out before 10am.

An awful lot of people stopped to talk to him and tell him how cute he is.

Once we sold out and Blake (and his dad) went back home, the morning was pretty dull…in fact it was downright boring. Do you know that I heard “wow! You’re sold out!” 45 times in 2 hours? Yes, I did keep track…I told you it was boring! But, the rules of the Market state that you can’t leave ‘til closing time. (and I’m married to the Market Manager…so I do have to follow the rules)  And, we did our best to have enough stuff to last all morning.

…and that was the week on the hill…

Hope you’re having a

Thanks for stopping by.  Come “visit” us again real soon!

This picture has absolutely nothing to do with the week, other than I took it last Sunday…but, I just HAVE to share it. I’m not usually a fan of black cows (except on the dinner table...they do make the most delicious steaks!) but, this ole girl might just be my new favorite cow.