This has been one of those weeks that I was really glad to see end.

I can honestly say that nothing went as I expected it to. And, that wasn’t necessarily a bad thing in most cases. Still.

The threat of measurable rainfall instilled a sense of urgency to our work schedule. We still had some animal re-arranging to do before the winter set in…and rain would not help those projects. As a matter of fact, any sort of rain was going to make all the jobs of the week far more difficult.

So, the Boss got into high gear with his new “ram hut” project. 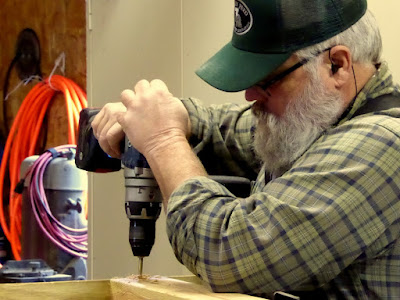 The “ram hut” is another one of those projects that definitely fulfills the three “r’s” …reduce, reuse, recycle...as so many farm projects do.

Years ago, we bought a brand-new set of cattle racks. To tell you that they were a big investment will tell you just how very tight things were in our early days here on the hill. They were really nice cattle racks, made out of steel with a locking, hinged door. We hauled all sorts of animals in the back of the pick-up with them. Cows, pigs, a pony…even a llama. Once, when the Boss was hauling a bull, the bull tried to climb the racks and get out over the top! Oh, if those racks could talk…

However, over time, they had become worn and rusty…that wonderful hinged gate didn’t swing so well and actually made things more difficult. They had undergone more than one modification. It was far simpler to load a bunch of lambs into the trailer…and we haven’t hauled a llama in years. (and I’m pretty sure that isn’t in our future! did you read this?) The racks went into retirement.

The Boss saw some real potential so we didn’t throw them out. We learned a long time ago to keep “old junk”. You never know when inspiration might hit. They sat in the backyard for a while, adding a little visual interest until they could begin the next phase of their existence as the framework for the new ram hut.

By attaching plywood sides and a corrugated roof, the Boss created a neat little hut for the ram’s winter quarters. In the past, the ram has had to hang out under the trees in bad weather. With the ram hut, he can be sheltered close to his feed and where we can actually see him.


Upon completion, the hut was dragged back to the ram’s winter quarters and the next phase of sheep work for the week began.

Ordinarily, the ram is removed from the ewe flock by Thanksgiving. We remove the ram for a number of reasons. The ram gets quite ornery after completing his one job for the year and often becomes aggressive toward the ewes. This can prove disastrous for ewes in late-term pregnancy. And, if the ram is not aggressive toward the ewes, he can be aggressive toward the humans. I’m here to tell you that can be disastrous no matter what your physical condition. And, then there is always the possibility of very late lambs. By limiting the ewes’ exposure to the ram, we control the lambing season. Lambs in April or later here on the hill mean nothing but trouble (in oh, so many ways). Then, the ewe lambs need to join the ewe flock. We have never had good success with yearling ewes as mothers, and choose to skip breeding that first possible season, letting them mature first. Exposure to the ram could prove more than a little problematic. So…bachelorhood it is.

For those of you wondering WHY early exposure to the ram can be a problem…read this...
and this.

This year, everything is running a little late, so Angus got an extra couple of weeks with the ladies. I'm pretty sure he didn't mind.

The ewe lambs re-joined the ewe flock and Angus headed off to his bachelor paddock.

Later, Angus realized he was all alone and began protesting loudly. The ewe lambs began protesting as well, although we have yet to figure out the cause. It got a little loud and chaotic here on the hill for a while. Fortunately, things have calmed down since.

With that project completed and the threat of rain getting more imminent, it was time to get the hens out of the garden and back to the spot where they will spend the winter. It was feared that the henhouse would mire down in the mud from any rainfall and we might never get them “un-stuck”. The move was done under cover of darkness when all the slightly sleepy hens had gone into the henhouse to sleep.

That move also went smoothly. …oh, wait. Somehow, moving the henhouse-trailer in the dark, the broiler field pen met with calamity. The Boss had been toying with the idea of a new design. Now that one side of the pen has been “slightly modified” (crushed), I guess he has another project for his wintertime “to-do” list.

One of my jobs for the week was to take Ellie Mae to the vet. Now, after I told you last week how very hard it is to take the farm dog to the vet, she proved me wrong. Completely, utterly wrong. I walked outside, leash in hand, said “hey, wanna go with me?” and popped the back of my Xterra.

…and she hopped in…

So, we set off to the vet where she behaved like a dream, got her shots and hopped back in the vehicle without assistance. I thought maybe I was imagining all the past bad canine behavior. (It may be some dog conspiracy to make me question myself and my sanity)

The dogs are set for another year and I got the medications that we will need for lambing season.

One more thing to check off the list. Hooray!

It was time to head home and pick…

But, first…
You’ll have to indulge me for just a minute. I’ve got something on my mind that just is NOT going away.

I try not to get into controversial topics here on the farm blog and keep the stories upbeat. And, I won’t go into all the details of this particular incident. But, this past week our beloved Augusta County made it to the world news stage…and not in a good way. Social media took a story that should have never have even been a story and made it into sensationalized news. And the angry mob mentality was whipped to a fever pitch. The fact that one person’s actions could affect the whole community and garner reaction from the entire world is truly disheartening and a more than a little disturbing. Every school-age child in our county has been affected by this situation…and it remains to be seen how things will play out in the future.

In light of this, I have a request...for what it is worth...

Please…before you believe, like or share one more of those controversial, sensationalized posts…find out the whole story. (there is much more to this story than made it to the world news)…and THINK before you react. Those click-bait headlines do nothing but make the beautiful Shenandoah Valley, more specifically, our very own community look bad…needlessly. The headlines also stir the anger and vitriol to new level of intensity, aiding no one and hurting many. Regardless of your personal beliefs, every angry word and hate-filled post only magnifies divisive issues and makes the entire situation worse. This would apply to every sensationalized headline out there. But, the recent incident in our own county just hits a little too close to home.

Okay, so…back to our regular programming…


Since this would be the last week of sales for 2015, we wanted to make it a good one. A check of the gardens and hoophouses revealed far more to harvest than I had originally anticipated. That’s always a good problem. Despite the earlier cold, there was a fair amount of broccoli, kale and turnips to harvest, and I hoped to beat the rain…

Picking in the cold rain isn’t a whole lot of fun (particularly because my raincoat suddenly no longer repelled rain) but, it was worth it in the long run.

We had a tremendous sale day! Quite possibly our best off-season sale day ever. And, we got everything delivered without a hitch. That’s always a good feeling.

Another shout-out to our great customers. THANK YOU!

Cold, cold winds blew in on Friday night, bringing a few snow flurries with them. Thankfully, it was nothing of consequence and sunrise caused the dusting to melt quickly.

It’s still cold, although not the 17* that was originally in the forecast. Although it’s still a good day to spend some quality time with the woodstove.  However, the unusual December weather is set to continue with temperatures headed back near 70* later in the upcoming week. This has been an odd month. A lot of people are getting a little antsy that we’re going to “miss winter” this year. All I can say to that is….just wait…JUST WAIT! Winter hasn’t even officially started.

And, that’s about it from here.

I do hope you’re having a Happy Sunday!

Have a great week and come back and “visit” again real soon.