Years ago, the Market was a far different experience than it is today.  Most of the clientele was older folks who had made their way to town after spending their youth in the countryside.  They were used to red tomatoes, yellow corn and white potatoes. Food wasn't supposed to be trendy and cool, it was just fuel for your body.

At the time we were also selling to restaurants, so occasionally we had new and trendy items in abundance and took them to Market. Purple basil, blue potatoes, garlic scapes…

I will never forget the time two little old ladies were shopping the Market and came across our blue potatoes.  “Blue potatoes?  Look at this….BLUE potatoes!”

The second little old lady was still muttering about blue potatoes as the pair made their way down the sidewalk.

That short exchange captured the attitude of the Market of yester-year and became a classic saying. (meaning, I have said it countless times over the years…sometimes because it’s just SO true…and others because…well, it’s either laugh or go crazy)

I know, I know, you’re wondering WHAT in the world that has to do with our weekly farm tour.

I can honestly say that despite years and YEARS of farming and gardening…I ain’t never seen NOTHIN’ like this year before...  We have experienced issues with the weather, pests and disease that are unlike any of our past experiences.

And, the Market experience has shifted once again…

But, don't get me wrong...I am NOT complaining.

Sometimes, when I re-read what I’ve written or I read the comments that folks leave, I wonder if folks get the feeling  I’m complaining or detailing a litany of failures.  That is definitely NOT my intention! While it sometimes seems that nothing is going the way I planned it, or how we may have expected, the reality is this place truly is profitable and successful.  Even the “disasters” grant us learning experiences.

...and while everything, from the weather to the market (and everything in between) seem hard/weird/different than ever before…we are actually ahead of last year’s earnings!

Monday was a hot, steamy day for processing broilers.  Summer had arrived with absolutely no warning.  You could see the thunderclouds building in the west. But, with the broilers processed and in the freezer, we decided I should head to town.  If I hurried, I could get the food/feed/bank run done and Tuesday would be a day of uninterrupted planting/weeding/working.

That was the plan…

Raindrops started falling from the sky just before the feedstore fellas started loading the truck.
“So…whatcha want to do about this?” they asked.  A quick check of the radar on my phone and I decided to take a chance. (I really didn’t want to have to haul out the tarp from behind the seat) They exchanged knowing glances, but loaded it anyway.  Before I left, the sun was shining brightly once more. They laughingly said “well, you was right!” as I drove away.  It was going to be a close call to get home and unload before raindrops fell again…but, I made it!

We did get a big storm that evening that cooled things off slightly. But, it looked like we were in for a run of heat and humidity.

After breakfast, we moved batch #3 of broiler babies to the pasture pen. Pretty much the same old, same old there. Did you read the post about  broilers?

We planted and mulched in the first cucumbers. Some of the plants had teeny, tiny cukes on them, so we are not that far away from the first pickles and salads of the summer. But, only if we beat the cucumber beetles. I have never seen the beetles appear so very quickly.  I think they were waiting for the plants!

We also got the first of the summer broccoli planted.  Hopefully, this will fare better than the early broccoli.

Sadly, the early broccoli crop is going in the fail column this year.  It is, at best, a great disappointment.  At least a third of the plants finally succumbed to the relentless, cold wind that lasted for at least three days several weeks ago.  (never had that happen before!) Another third of the crop “buttoned-up”. This happens when the plant is stressed and makes a head long before it should.  This causes the crown to be quite small.  For the record, once a broccoli plant makes a head/crown, it will only get to a certain size before it turns into flowers.  You can’t leave the little heads hoping they will grow. That’s the first time in about 10 years of planting early broccoli that we’ve ever had THAT problem, despite freezing temperatures and snow on the plants. Never seen nuthin’ like it!

Before I could get to the “after lunch” jobs, the phone rang. It was the Staunton Post Office requesting that I come to town and pick up the next batch of chicks. I must say, it was a good thing that Gus and Ellie helped get the brooder cleaned out earlier in the day!

It seemed particularly noisy as I walked into the Post Office.  When the postal employee escorted me to the area where they had the chicks, I suddenly saw why.  There were boxes and boxes of chicks.  One of the other local producers had received a shipment from the same hatchery and if I did the math right, there were over a thousand chicks cheeping away in the back of the Post Office.  I can honestly say, I’ve never seen that many chicks at the Post office before! (I didn’t envy the postal workers…it was deafening)

With the chicks safely tucked in the brooder, I went back to weeding. The weed pressure is phenomenal this year. (ain’t seen nuthin….)

I must say, I totally understand the use of pre-emergent herbicides.
And, no, we don’t use them.
Obviously.
Corn gluten helps…some. (there are lots of variables in application and efficacy) But, for the most part, we are pulling a LOT of weeds. While this does work and I guess we can be glad for the time of thought and meditation, it does cut down on our productivity AND if we don’t keep up with it, plant health is greatly impacted, ultimately affecting yields.

The Boss tilled and hilled the potatoes. 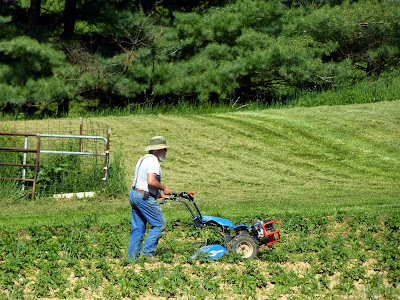 The tilling cuts down on the weed pressure and the hilling loosens the soil, allowing the tubers to grow larger.  He says we’ll have “new potatoes” in a couple of weeks.  While I have my doubts about the timing, the potato crop looks like one of the best we’ve had in a long time.

Later, while I was working in the hoophouse, I saw the Boss head out the lane on the tractor. I didn’t give it much thought until I saw him WALKING back a short time later. It seems the tractor had a flat tire.  When the tractor has a flat, it’s not generally a matter of just putting a little air in the tire.  And, this time was no exception.  Three tire shops, at least two phonecalls, a lot of frustration and a minor roadtrip, and the Boss was back in business.

…nope…never…before…  On the bright side, the new tire was far less expensive than I feared!

But, you know what...I can't tell the old one from the new one. Can you? 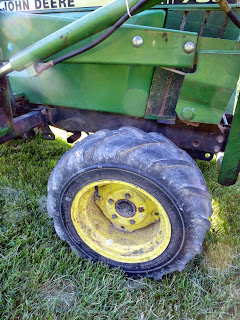 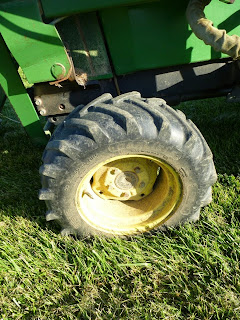 With the daily thunderstorms came big changes in the weather.  I mean BIG changes.
We went from temperatures in the eighties to barely getting out of the forties.  The unseasonably cold weather in late May when the berries are in blossom is often referred to as “Blackberry Winter”.  It is thought that this weather phenomenon is actually necessary to good berry production.  While I cannot attest to the truth of that statement, I can tell you that if the blossoms are any indication, the blackberries, black raspberries and wineberries will be in great abundance this year. Now, if we can just beat the birds (particularly the blasted crows) and the resident bear of Mbrk to the harvest!

Since outdoor work was out of the question, we decided to make a quick dump run and swing by the hardware store. Heading out Cherry Grove Road, we encountered… 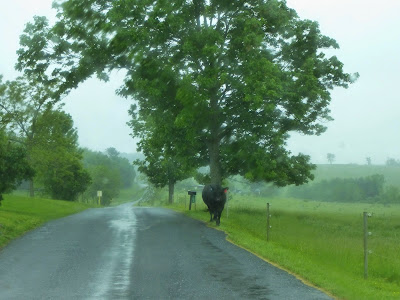 There was a Black Angus bull wandering down the road.  He was bellowing away, looking for some “ladies” and wasn’t even slightly interested in going through the gate the Boss opened.  Since chasing bulls can be more than a little dangerous, (and we really didn’t know where he belonged) we left him to his search for “love”. He was last spotted walking up toward Jr’s carport.  Hopefully, he went on toward the ballfield and the fire department where someone could direct him back home again. Pretty sure we'll hear an update next time we go to the Post Office! 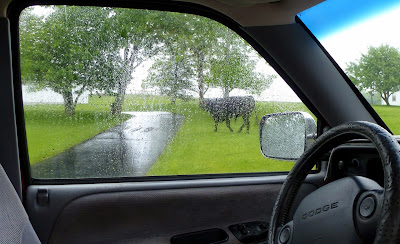 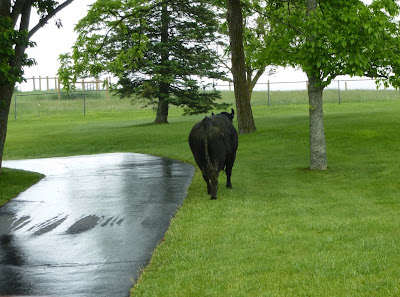 You know what?  In all our years living in the country…(nearly my whole life…virtually forever…)…I can honestly say “I ain’t never seen nuthin’ like THAT before!”

Although, as a kid, I distinctly remember a cow walking up to the front door.  And, my all-time favorite neighbor story involves another wandering cow. Read  THIS.

The rest of the week was fairly uneventful.   (thankfully)

The Market was good…lots of people, good music and pretty weather.

Now, it’s time to re-group before getting back at it tomorrow.

Because, it doesn’t matter that tomorrow is Memorial Day.  The holiday gets little recognition here on the hill.  Although, it has been our annual shearing day a number of years. This year promises to be slightly different.  Since Blondie (our usual shearer) is six months pregnant, the job will fall to the old folks this year.  There might just be a blog post in that one, so stay tuned!

In the meantime, have a   Happy Sunday!

Thanks for stopping by…come “visit” us again real soon!