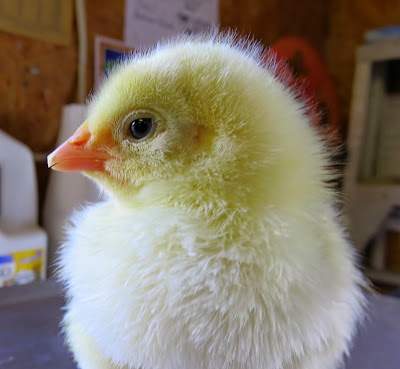 Is this CUTE, or what?

Every four weeks from the end of February to the beginning of October, we head out to the Post Office to pick up a box of chicks.

And, every time I post a picture, someone is sure to make a comment about how very cute they are. I’ve had countless folks ask me how we could possibly eat something so cute. When I invariably reply “we don’t”, they look at me funny.

I’m pretty sure nobody thinks about the fact that there’s no way that tiny, cute chick could ever fill a fry-pan without a great deal of growth. And, I’m here to tell you, ready-to-eat broilers are NOT cute! But, they are delicious! 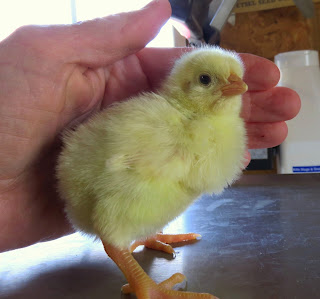 For the last two months, I’ve been working on a project to explain just how that CUTENESS becomes that DELICIOUS-NESS in just eight weeks. I weighed and photographed a chick each week from arrival to processing day. The changes were amazing.

**a note here:  The weights are for the first batch of 2015. These chicks stayed in the brooder slightly longer than normal since the weather was so cold. Generally, that means that batch is slightly larger than the rest.  I do not know if I used the same chick for every photo and this was in no way a scientific study. Just my own observations from our operation for informational/educational purposes.**

I admit, those little fuzzy chicks are incredibly cute.  And, it is simply amazing that something so very tiny (they’re slightly bigger than a large marshmallow when they first arrive) can survive the trip from the hatchery in Pennsylvania and adapt so quickly to their new surroundings.

Within moments of their arrival, they are eating and drinking, scratching around and generally acting like…well, chickens. Within days, their fuzz is giving way to feathers. You can almost see them growing right in front of you.

But, as they grow, the cute factor fades. Quickly. Since we aren’t in the business of stocking Easter baskets or providing models for storybooks, we want the quick growth that is a sign of health and vigor.  Their efficient conversion of feed to weight gain is NOT a by-product of steroids, hormones or any type of additive. Their growth is simply a result of good breeding (on the part of the hatchery) and good management (on the part of the farmer---mostly the Boss).


For the record, hormones are NOT used in any poultry in the US.  It is against the law. 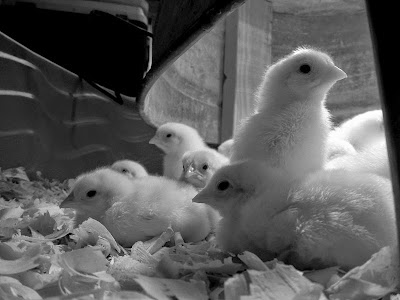 When the chicks first arrive, they are just itty, bitty balls of fluff.  They’re usually cheeping furiously and eager for a little drink of water and a source of warmth.  Weighing in at a little over ONE ounce each, it seems unlikely that we could consider eating them. An entire chick wouldn’t even make one chicken mcnugget! (and that’s just gross, anyway) 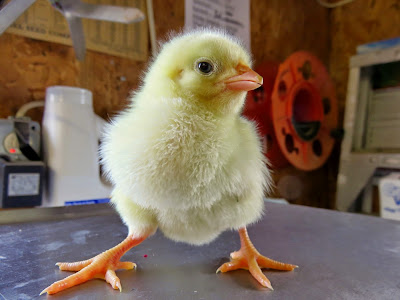 By the time they are just one week old, they’ve changed considerably. Now, the chick weighs nearly 6 ounces. He’s much taller, and his wing and tail feathers are coming in quite well.  This particular chick was not at all impressed with his “fifteen minutes of fame”. 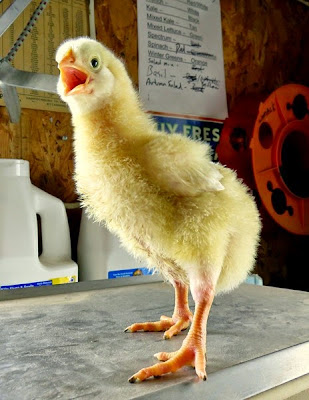 All the chicks do is eat, drink, sleep and poop. (and boy, can they poop!)  This is on a constant repeat cycle.  They are incredibly efficient growth “machines”. 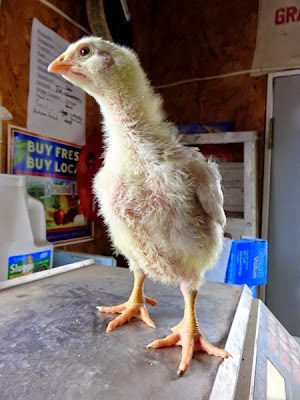 Week two and the feathering out of the wings is nearly complete.  Their feet have gotten enormous (they will have to be to support the broiler’s weight later on) This one weighs nearly one pound already.
At three weeks, any remaining cuteness has all but disappeared.  A little fuzz remains as the rest of the chick’s feathers begin to fill in. You can certainly tell roosters from hens at this stage.  See this guy’s big, red comb? He now weighs nearly two pounds! 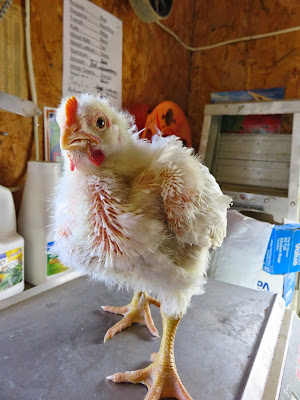 Remember, that is just normal, healthy growth. Nothing is forced or unnatural.  Some would argue that breeders should not want the animals to grow so quickly. But, as good stewards, we want the animals to be efficient processors of our limited resources.

We also move the birds out of the brooder at this time.  The brooder gives them constant heat, light and warmth, aiding in their growth.  Once they have feathered out, they have the ability to adapt to the changeable weather in the pasture. Here they have the opportunity to eat grass and scratch in the ground. I will point out that they don’t often expend the effort to scratch or eat grass.  They seem to prefer to park themselves by the feeder and chow down. 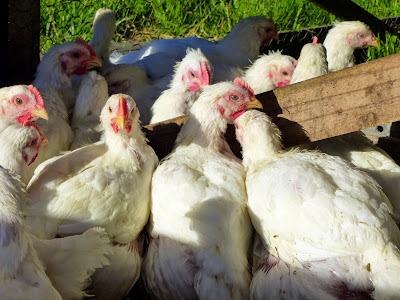 **A note about pastured birds.  Pastured chickens are not roaming wild and free across the countryside.  That would be foolhardy and dangerous.  They MUST BE provided with protection and a constant source of fresh feed and water.  Without protection of some sort, the chicks would end up being a tasty meal for any number of predators.** 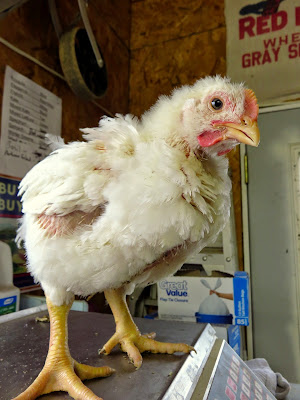 By four weeks, the birds are weighing in at nearly 3 pounds. They could be processed at this size and age…they would finish out looking like the Cornish game hens you see in the grocery store. (which are indeed relations of the Cornish Giant that we raise) As for “cuteness”, that’s definitely a thing of the past!

The roosters generally grow much more quickly than the hens, although all the chicks are averaging well over FOUR pounds by five weeks of age. 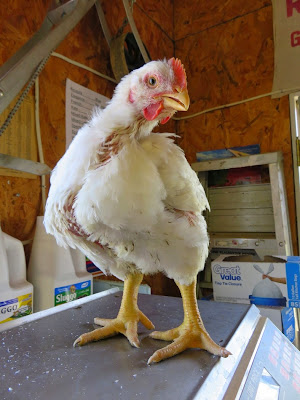 By six weeks, they’re really big.  This is the point when a lot of large scale producers go ahead and process them. 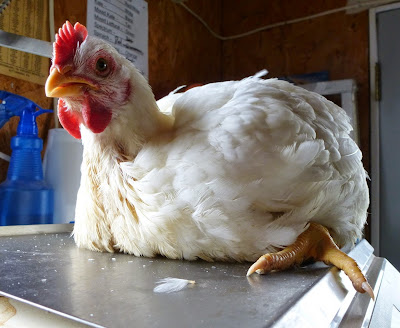 They weigh nearly six pounds each and have long, sharp toenails and incredibly strong wings (you don’t want to get flapped or scratched, believe me) 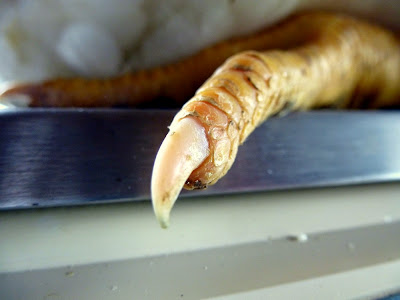 By 7 weeks, the biggest ones are nearly eight pounds.  This guy weighed in at  a little over 7.5#. This sounds enormous, but a fair amount of weight will be lost when processing and getting rid of the feathers, feet, head and internal organs. 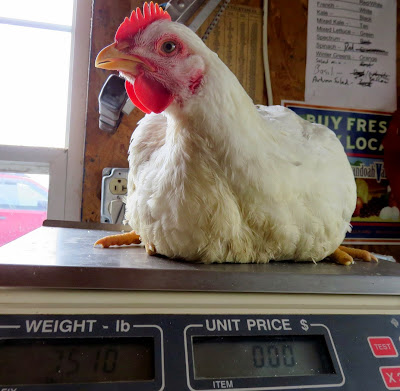 The final photo before the broilers are processed. 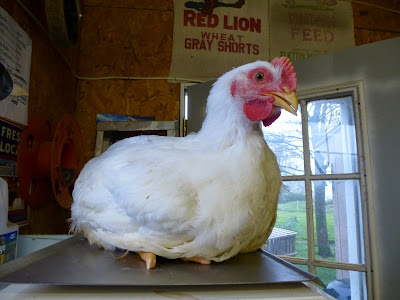 Fully feathered and incredibly large, it’s hard to even imagine that this big guy was ever fuzzy and cute.

Here is the final product.

It will be bagged, chilled and frozen before we take it to the Market for sale.

I purposely did not include processing pictures, as I am certain that some would find them far too graphic. But, the fact is, in order to have animal protein, you must kill animals and prepare the meat.

Since we are a small operation, we process the broilers in our backyard. (Yes, “process” does mean the same as “butcher”) This would not be prudent or in any way efficient for the large producers throughout the country.  In our state alone, nearly one MILLION broilers are processed on a daily basis.  Did you read  this one?


The cycle continues as the next batch is moving from the brooder to the field pen and we will be heading to the Post Office to pick up yet another batch of “cuteness” or potential deliciousness, depending on your perspective.

It is my hope that this post helps you see both.