The word for the week was UNEXPECTED.  A little bad, a little good...it all worked out in the end even if it wasn’t part of the plan.

The week got off to an unexpectedly rocky start when FedEx dropped a package OVER the gate.  Now, I’m sure the delivery person was trying to be helpful. But, the “director of farmland security” (I know it was Gus, but cannot prove it) saw that as a possible threat and had to search and destroy the package. The contents were scattered along the driveway and bits of box were everywhere.

Thankfully, despite the mess, the damage was minimal. Since we cannot get Gus to check the “safe senders’ list”, we may need to leave special instructions for the delivery folks in the future.

Monday afternoon we had an unexpected thunderstorm that dropped over an inch of rain in less than an hour.  There was some fairly good-sized hail mixed in there and a good deal of wind as the weather pattern changed again. I spent the entire storm worrying over my camera (which I HOPED I left at the barn) and the tomato/pepper plants that were sitting in the trailer (the storm came up hard and fast with no time to get the tractor and move the trailer to the shed). But, my camera was safe and the plants fared well in the storm.

I made a tour of the farm after the storm. There was flooding INSIDE the hoophouses, barn and brooder, and Gus’ dog-cave under the reefer was filled with water.  The super-saturated earth led to some sort of invasion into hoophouse #1 which will call for some sort of intervention in upcoming days.
(and Squeekie made the most of the rat's nest that flooded out into the middle of the barn by eating the baby rats---ewww...but, Yay, Squeekie!)  And, while the lambs were greatly enjoying the tasty treat of fresh rosebush leaves, the Boss would have to repair the fence where the bush had blown over and pulled the wire off the post.   Not a big job, but again…unexpected.


The unexpected reared its head again as the Boss left the farm truck at the top of the lane for a delivery.  Since he was expecting boxes (and boxes) of egg cartons, he couldn’t risk a “farm security check” and there would be far too many parcels to carry easily, he left the truck at the gate, hoping the UPS man would put the boxes in the back. (and he did! YAY, UPS!)  As he walked back, he heard buzzing.  Lots and lots of buzzing.  As he looked around, he discovered a swarm of bees in one of the pine trees. 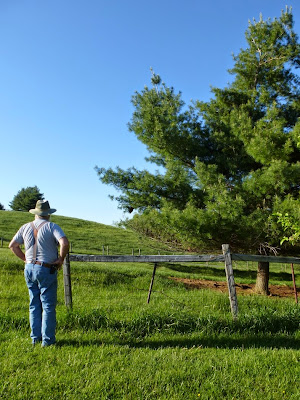 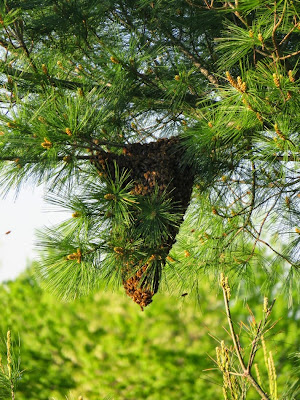 Surely you’ve read all the dire stories about bees, how many have died unexpectedly and how they are so very important to food production. There are even campaigns to “Save the Bees”.  So, if there’s a wild swarm, someone should do something to give them a good home, and put them to work pollinating crops and making honey.

Beekeeping is one of those things I’ve always thought was cool.  Yeah, it would be a great thing to get into…and local honey is a hot item right now. And, here was a swarm on our land!  However, we don’t have the time, inclination or infrastructure to start another big project right now.  But, a swarm of bees really needs a home…so, the Boss put in a call to one of the local beekeepers.

The bee-man was excited about the thought of feral honeybees. The Spring has been kind to the bees and there are flowers everywhere, so it’s been a record year for swarm collection. With all the issues of colony collapse and mites, bees with a good survivability gene are immensely important.  So, he headed over to re-home the swarm and in the process, the Boss and I learned a good deal about bees. It was quite interesting…and, no one got stung!  Even better, the bee-man will soon have honey at the Market! 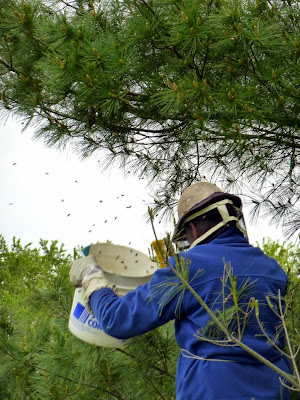 With the bees headed to their new home, it was time to get back to the regular stuff of the farm.  We worked on weeding the onions.  All that rain seemed to bring forth a bumper crop of WEEDS.  I spent some time in the greenhouses starting more seeds.

And, the Boss mowed…and mowed. (that could be a full-time job this time of year) The mowing came to an unexpected stand-still when the back tire needed some attention…Thankfully, the tire was just REALLY flat and didn’t need replacement.


Liver flukes are caused by a parasite carried by snails. (I already knew that) Fluke infestation can kill lambs quite quickly and there are snails EVERYWHERE. (I knew that, too)
But, there’s also a clostridial disease carried by snails, and I think that is probably what killed the other lamb. (I was more than a little concerned that we were facing that one again) We treated the entire bunch for parasites, as overload and infection seemed to be a very real possibility.  He still seemed off…and he wasn’t eating. (a lamb that won’t eat won’t last long) The Boss and I resigned ourselves to the inevitable. But, when I put them in a new paddock, the sick lamb kicked up his heels and put his head down and started eating his way across the pasture.  Later, he was seen chewing his cud! I couldn’t believe it. Then, he started shouldering his way in at the feeder (like the rest of the hungry horde) Now, that was un-expected in a GOOD way!

With all the moisture, the potatoes seemed to sprout overnight. It looks like the best germination ever.  My best guess would be about 95%.  That’s pretty good!

And the potato beetles aren’t quite as awful as last week…but, look on the underside of the leaves.

Do you know what those little orange things are?  Eggs.  Potato beetle eggs.  Nope, the battle is not over.


After torrential rains and gale force winds, it was obvious the weather was changing, so we weren’t at all surprised to find we were under a frost warning one night. We hauled out the frost blankets one more time and covered the squash  and parked the trailer with the covered tomatoes and peppers in the shed.  But, we took a chance and left the strawberries were left to the whims of the weather. The overnight temperatures never got as cold as expected and we escaped any frost damage.


HOORAY! I really hope that is the last of the cold weather for this season. Because there are signs of summer everywhere...

The week came to its usual climax and conclusion with Saturday’s Market.  Nothing un-expected happened at the Market (which is a good thing) and we got home, had lunch and even got afternoon chores done before the Heavens opened with yet another unexpected rainstorm.


Now, for a little down-time on this gloomy, potentially rainy Sunday...

Tomorrow will start another “week of the broiler” here on the hill and I am hoping to get a post written about that this afternoon. We’re also supposed to get a whole bunch of transplanting done…the cukes, tomatoes, okra, summer broccoli and peppers are all supposed to get in the garden this week!

Thanks for stopping by!  Hope you’ll come and “visit” us again real soon.