The Definition of Determination 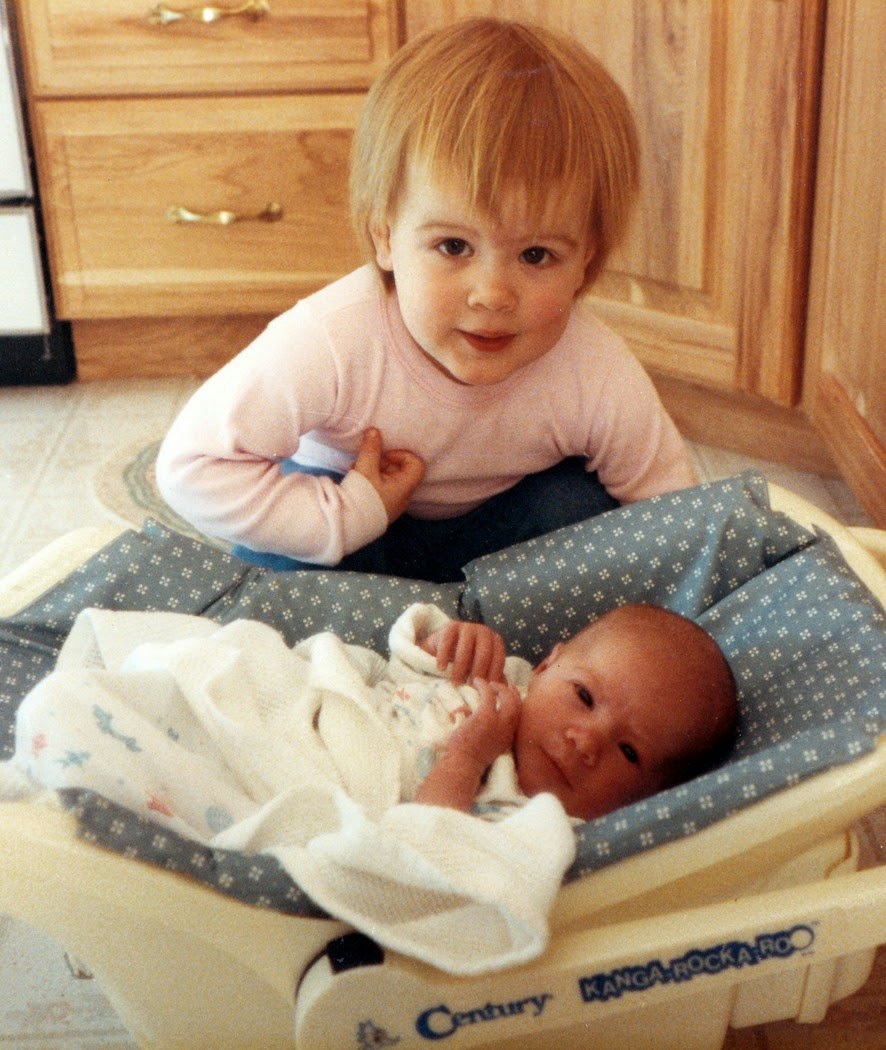 It is a temptation as parents to point out just how much we’ve taught our children and to take great pride in their accomplishments. While we are incredibly proud of both of our daughters’ successes, I’m pretty sure THEY have taught us far more than we ever thought of teaching them! (and I say this as a veteran homeschooling mom) 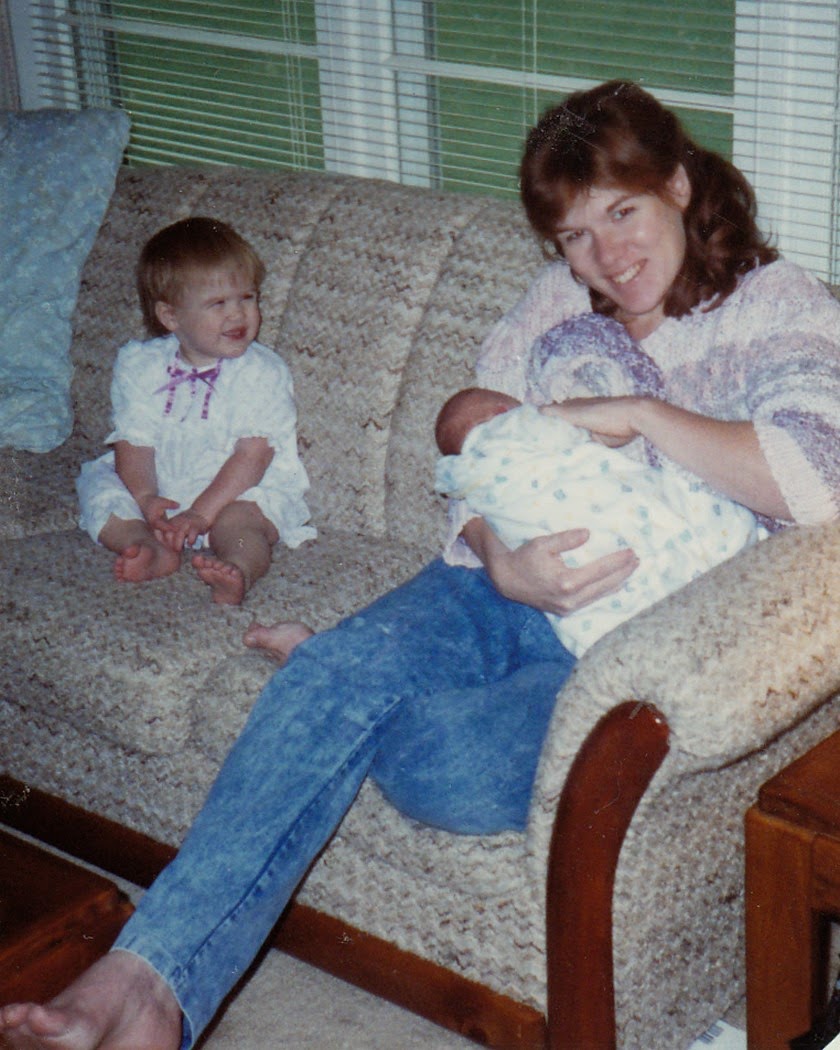 From the moment she arrived in this world, Blondie has challenged me to re-think most everything I thought I knew about…well, everything. 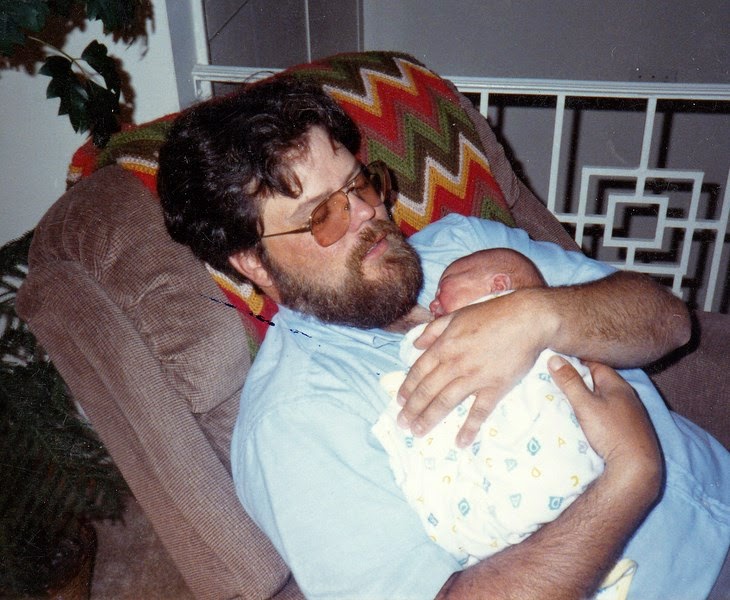 I knew she was going to be a force to reckon with when she was about four and I was about to apply the “rod of knowledge and understanding” to the “seat of knowledge” and she wailed, “but, wait!  I’ve been falsely accused!” That one stopped me in my tracks.

When we arrived on the hill, she was but a tiny slip of a thing, running like the wind from point to point, in an attempt to be “wild and free” like the horses she loved so much.

Raising children and while starting a farm from scratch was a challenge to say the least.  Money was tight and we had to be creative in our approaches to a lot of things. So, when the request for a pony was presented (repeatedly) it was denied.

Bud-the-calf was offered as a stand-in pet. But, Bud was a baby and he found the expeditions over hill and dale more than a little tiring, so he would revolt.  And, by revolt I mean he would simply walk no farther and attempt to lie down and take a little nap. Then, she would be stuck far from the house/barn with a tired and un-cooperative calf (that was as big as she was). To keep the walks moving along, she would carry the calf bottle along on their walks and give Bud a little drink before heading back to the barn.  It was a sight to see.

But, Bud was no pony.

Kuh, the milk cow, could be ridden ever-so-slowly around the barn.  She was nearing retirement age and did everything slowly, so safety was never a concern.  But, a cowgirl needed to be “wild and free” and fast as the wind.

…and as much Kuh was loved, she was no pony.

In a bid to teach some lessons and encourage a good work ethic, the Boss promised that if “you earn the money---you can buy a pony”. He had no idea that he had just thrown down the gauntlet.  Blondie picked up that challenge and ran with it.  Ran like the wind.

When you’re ten years old and living in the country, earning money can be a challenge.  In a move that would dictate her future, Blondie determined that she wanted to sell something at the Farmers’ Market. We decided on a product, found a recipe and came up with packaging.  …and she was off and running yet again.

Despite the fact that it occasionally took the efforts of the entire family to blast Blondie out of bed in the mornings…on baking day, there she was…no added incentives needed.

That determination paid off when the “horse fund” was finally big enough and “J-man” joined us on the hill.  He was just a baby mini-horse and was more than a little “wild and free” himself.  But, she loved him and was determined to have him learn to pull a little cart. (that she bought with money earned from granola bar sales) 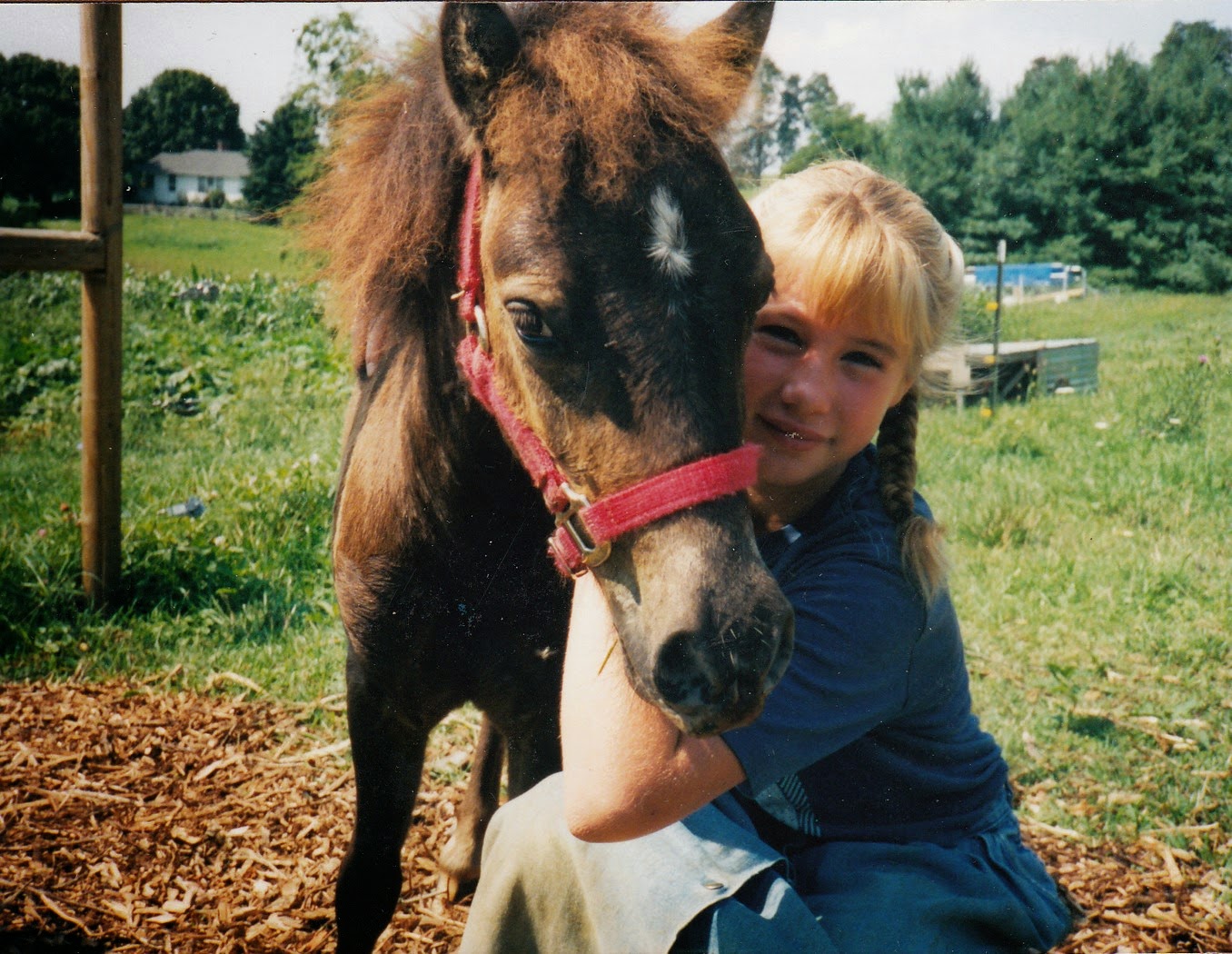 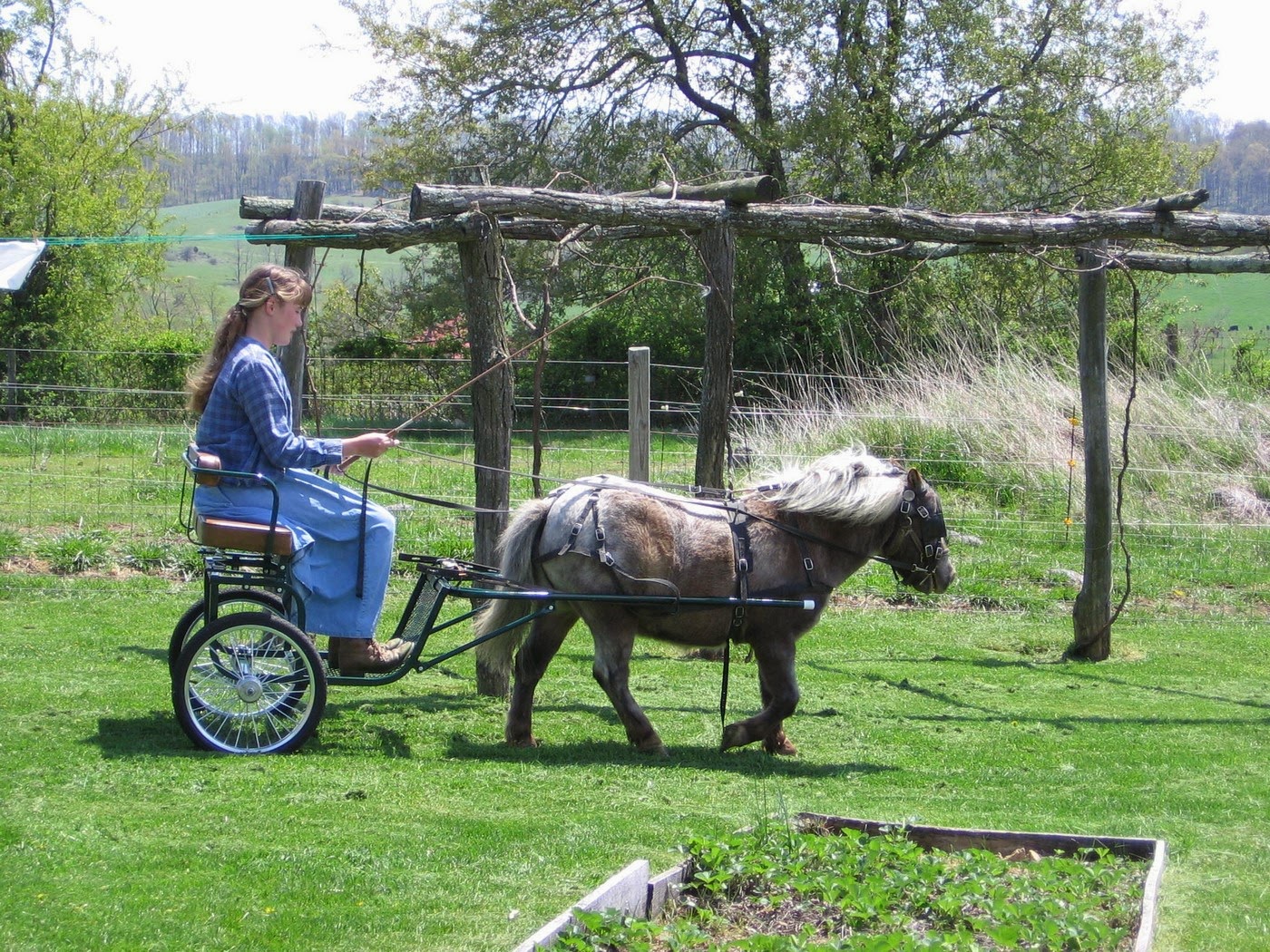 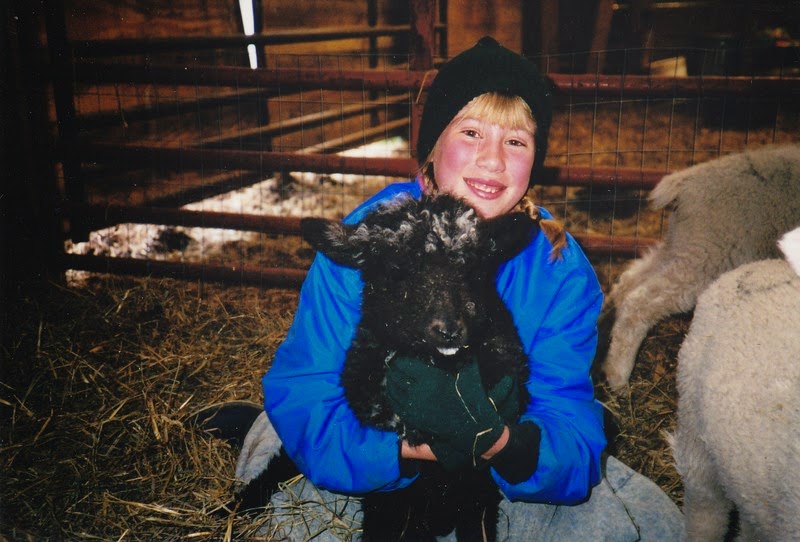 When the sheep became part of the farm scene, Blondie was determined to become the shepherdess.

Not just feeding them, but spinning, dyeing and weaving their wool in to all sorts of creations.  Felted artwork became part of her Market offerings. (because that little horse needed feed and care and…) 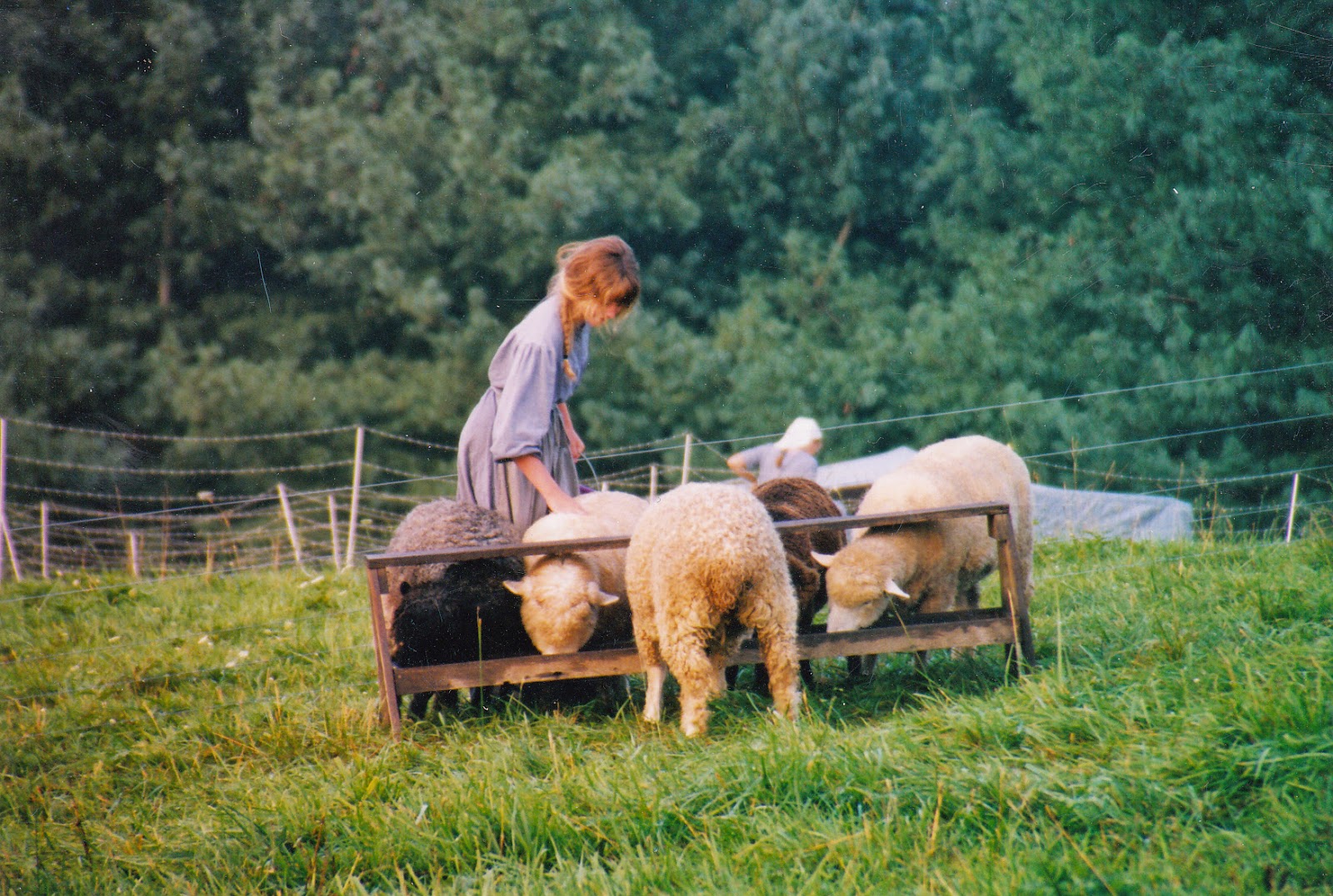 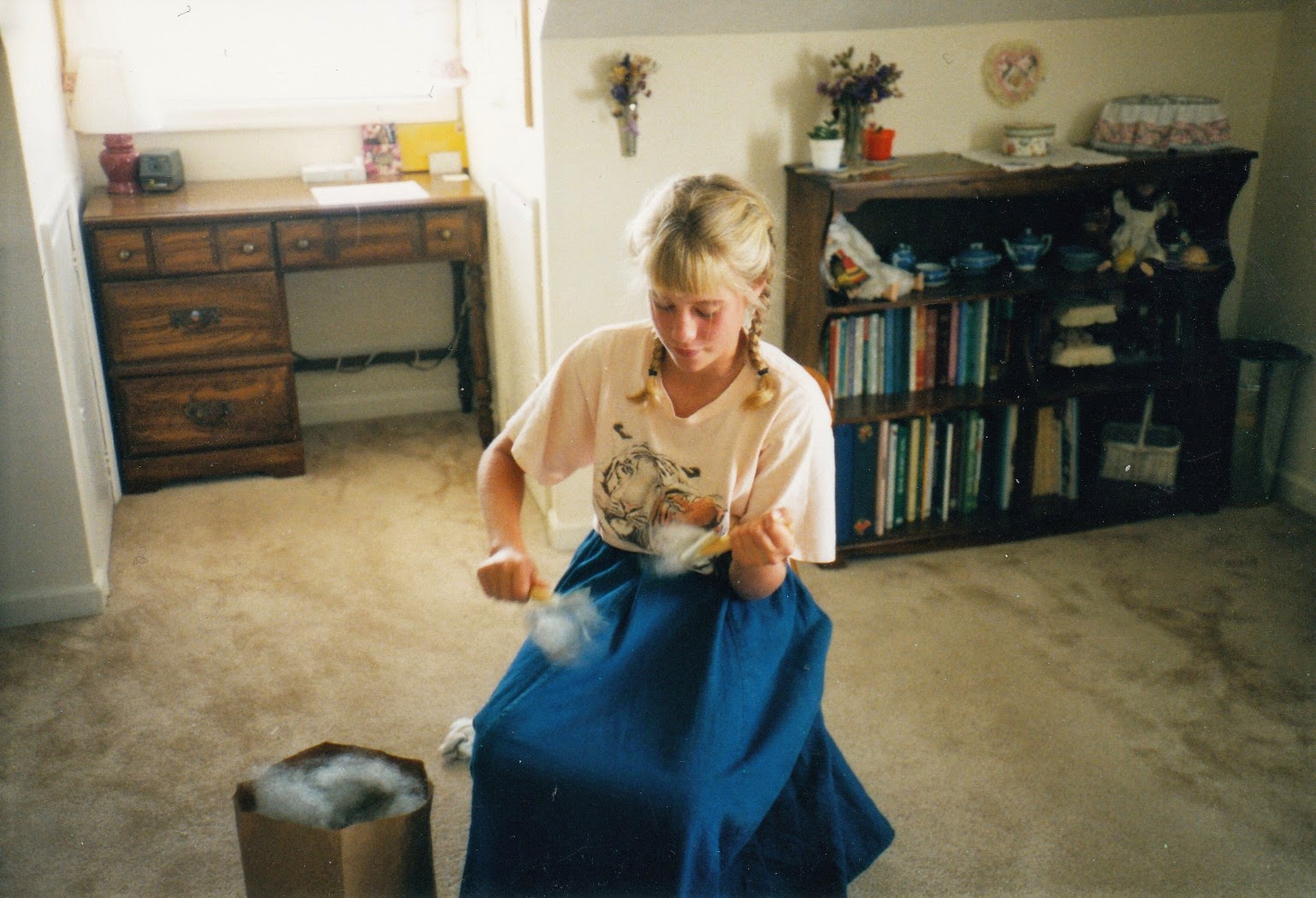 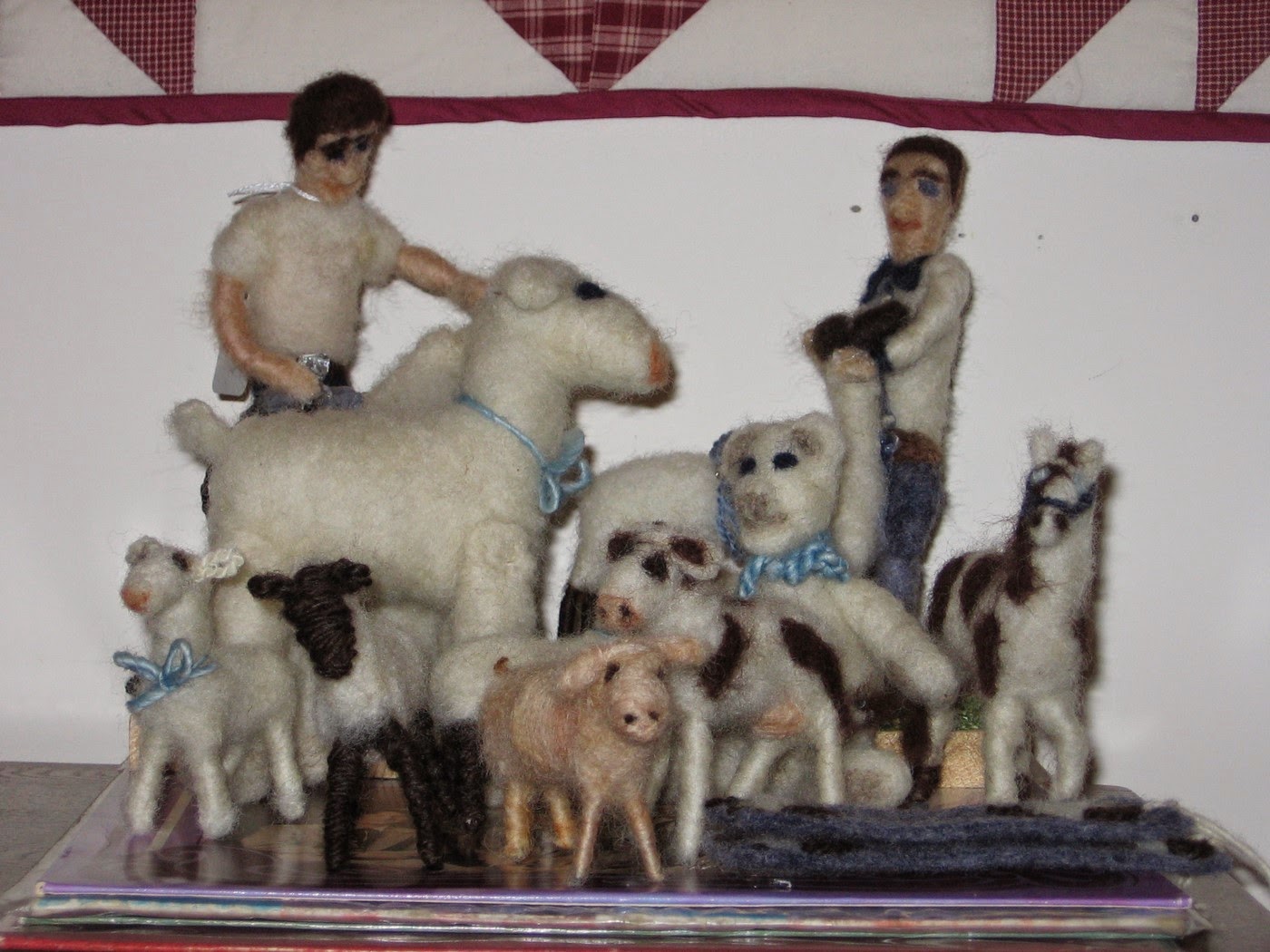 Then, she was determined to learn to shear. The Boss took her to a class at VATech and she became our go-to shearer.  She even began to shear for others, adding to her earnings. 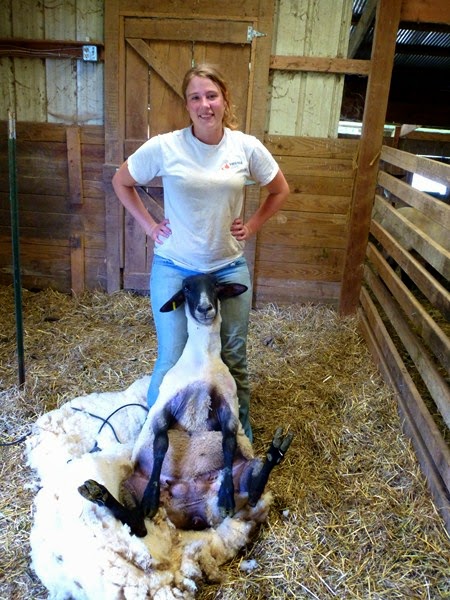 When the show-ring beckoned, she approached that with the same steadfast determination, researching online, chatting with like-minded souls late into the night, observing every sheep show she could find, practicing for countless hours in the backyard. 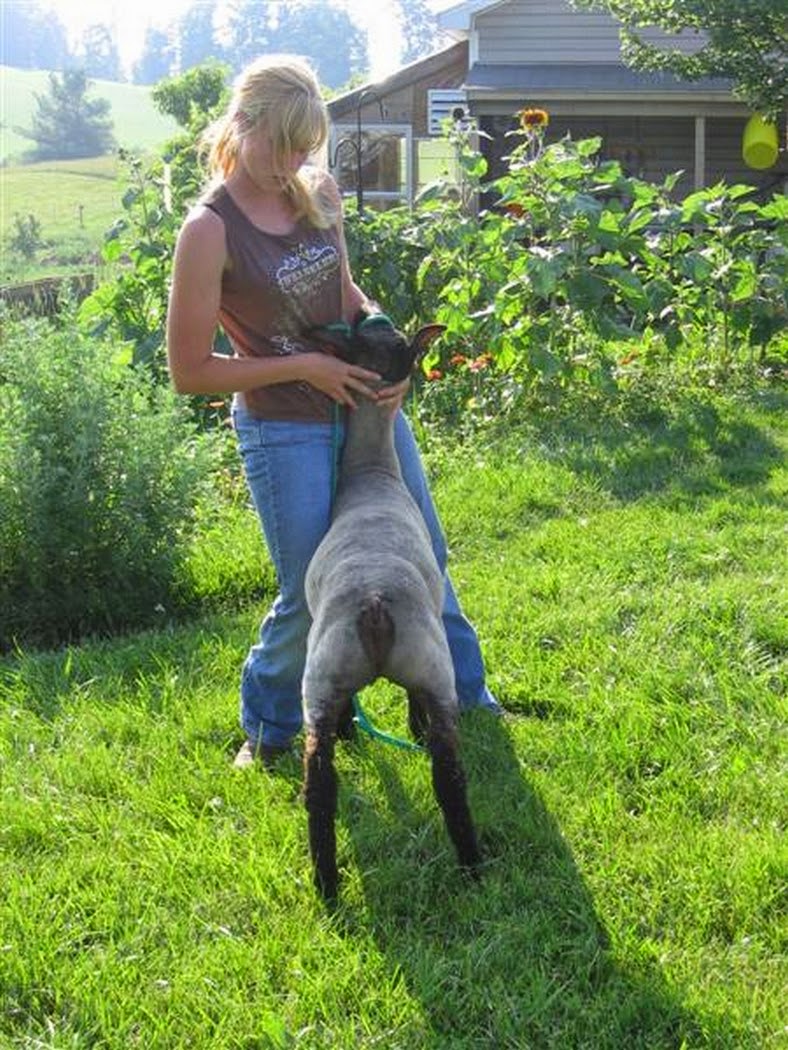 Somewhere along the way, the “famous granola bars” at the Market became a thing of the past as Life’s more interesting options presented themselves. As a “real grown-up”, she got a job, met a guy, got married, and bought a house. 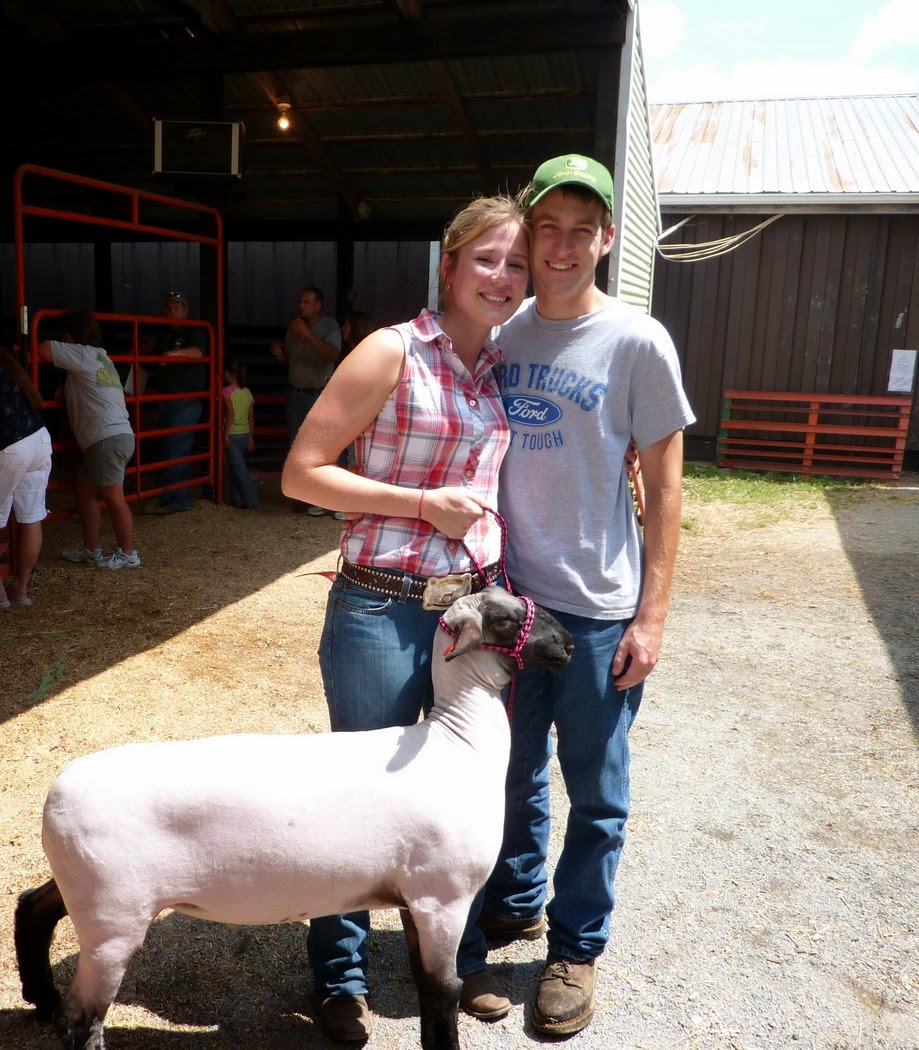 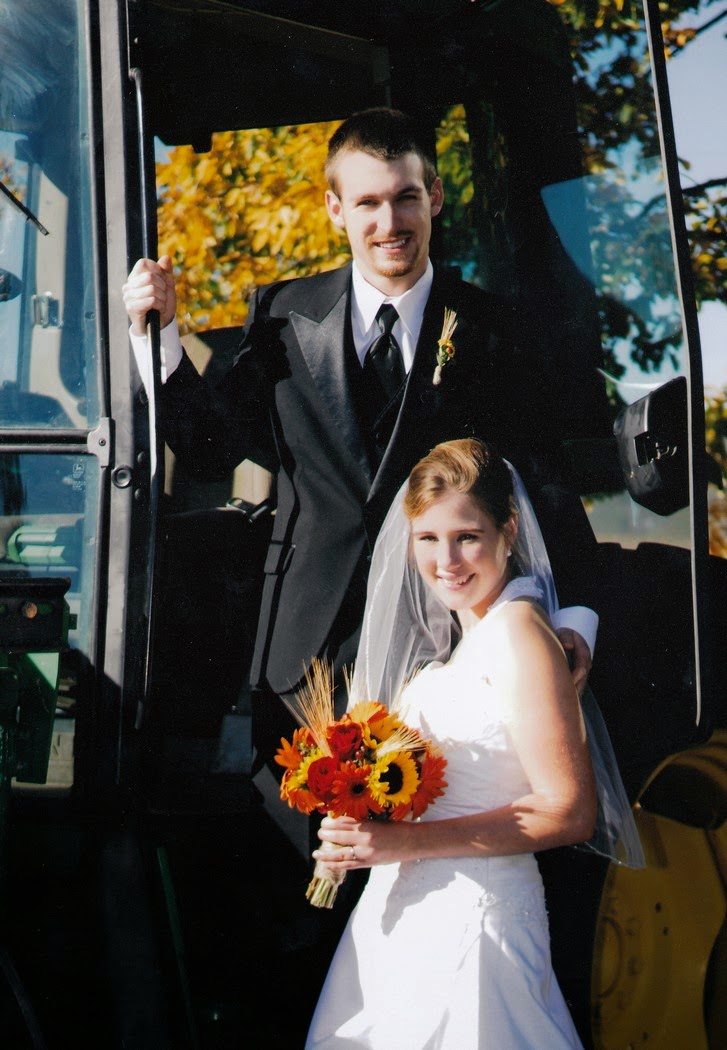 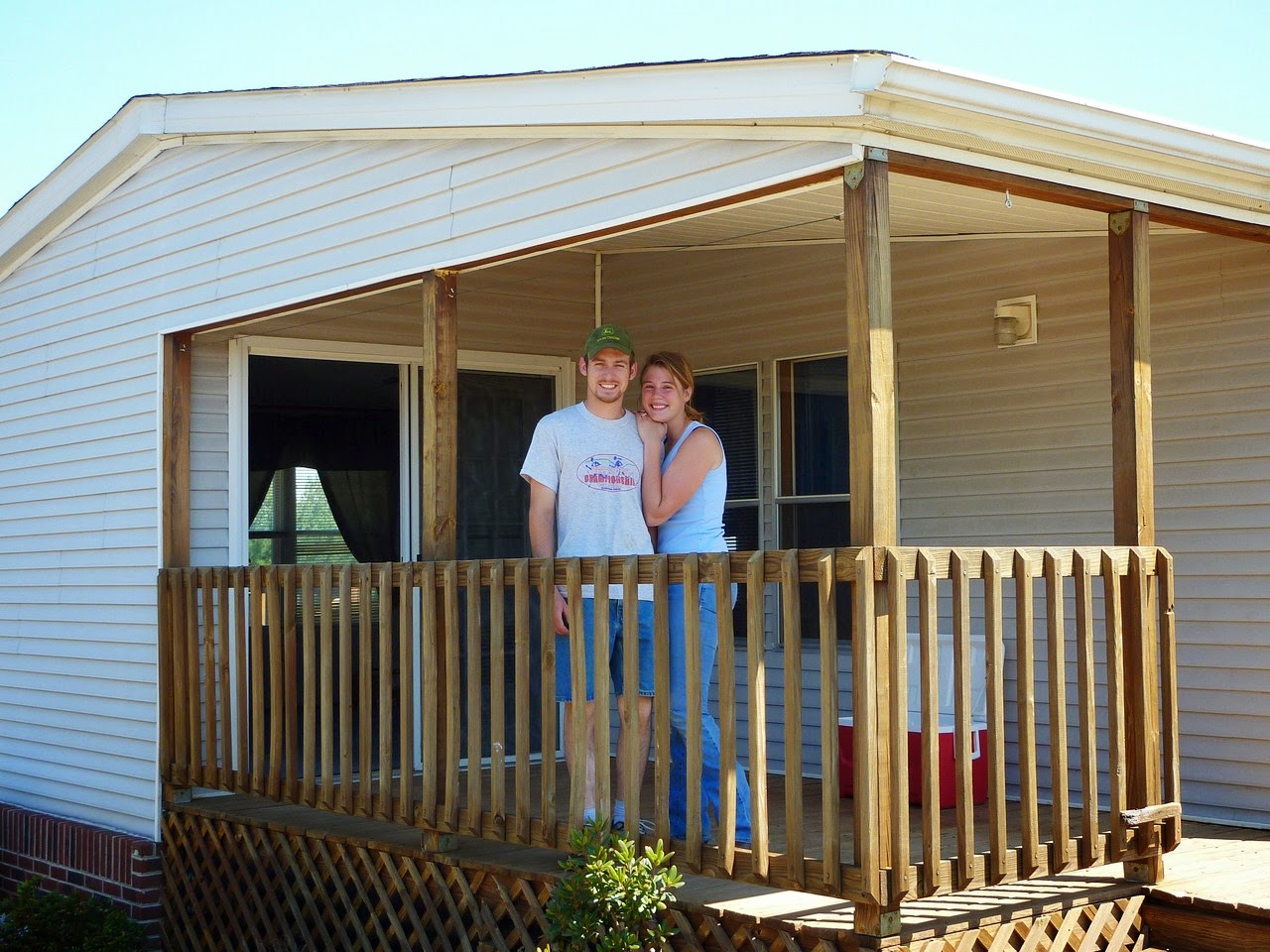 But, the call of the Market was a strong one.  She was determined to return to her entrepreneurial roots and become a Market vendor once more.  Although now the “famous granola bars” wouldn’t be enough. She wanted to offer baked goods and produce…to make this enterprise pay big time.  Armed with my old bread recipes, lots of new ideas, a few bread pans and fierce determination, she again became a force to be reckoned with.

Her Market display is amazing! …and so are her sales. 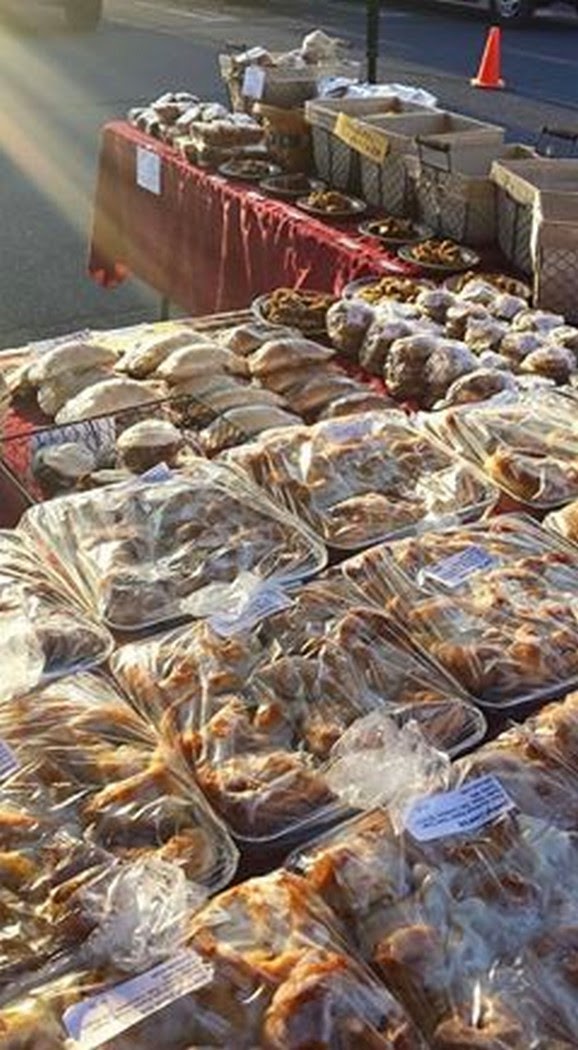 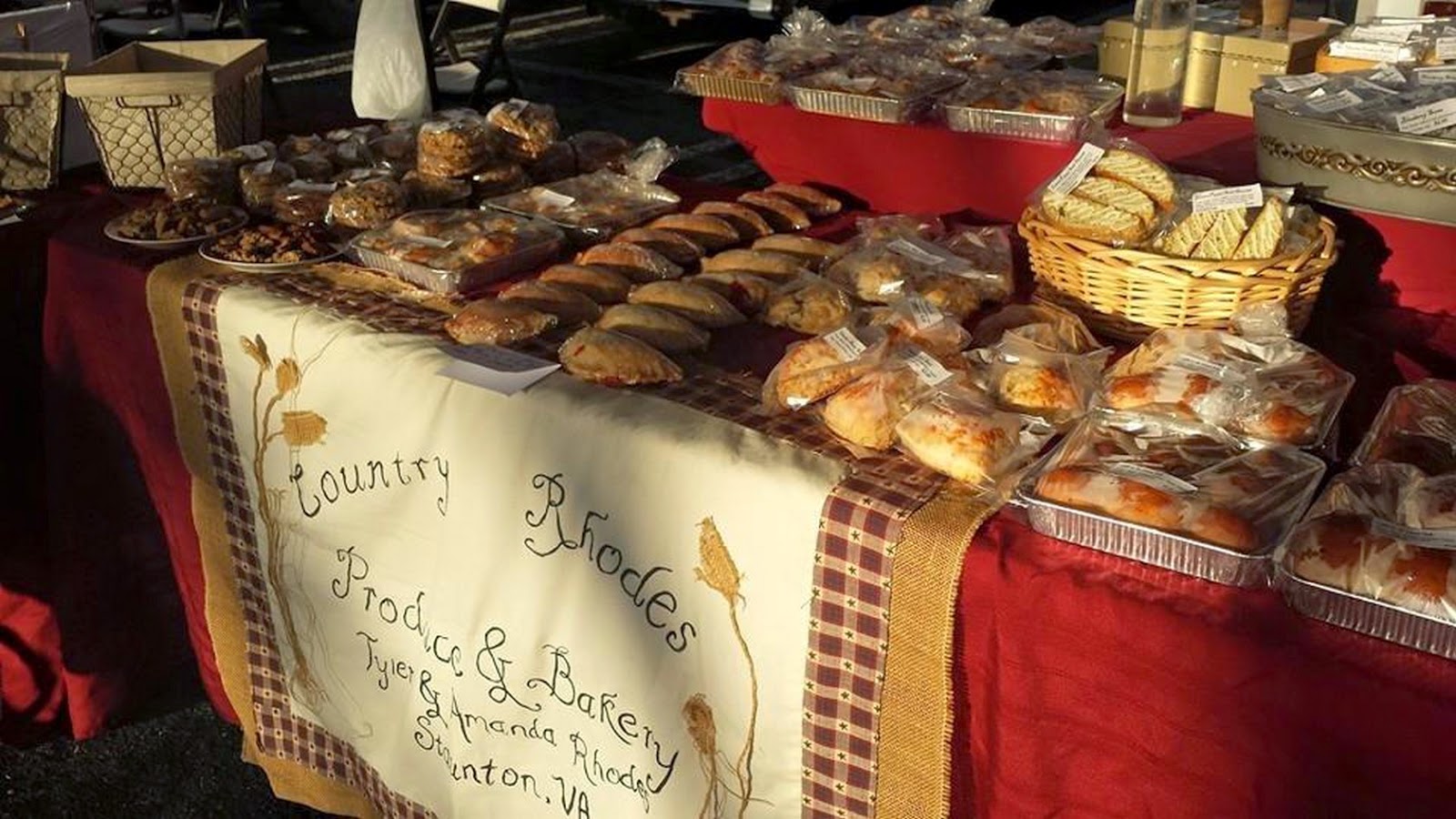 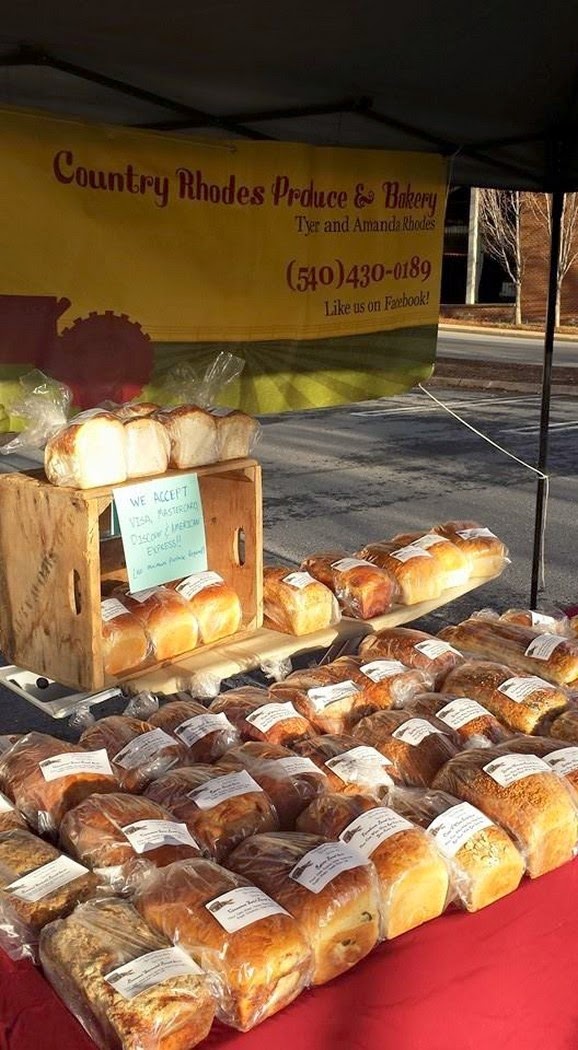 In August, Blondie and Tbone will welcome a son to their lives and I’m pretty sure it will take a great deal of determination to keep the garden-baking business on an even keel with an infant in tow.  But, if anyone can do it…Blondie can. 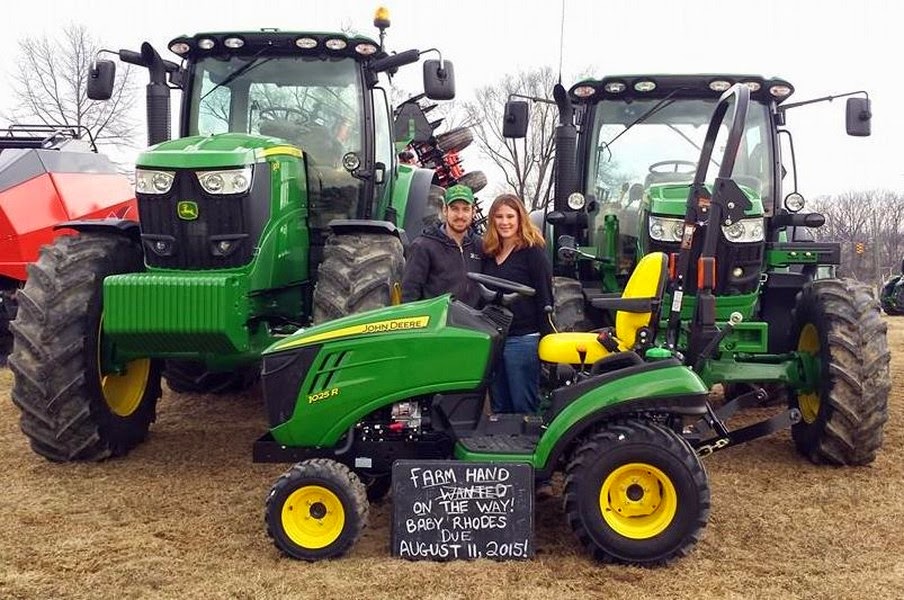 Well… Determination defines her.  Or, maybe she defines determination!

You are a challenge and an inspiration and I LOVE YOU!