Remember all those days back in the wintertime when it felt like Spring was never coming?  That we would never be able to get back outside and do any real work?  Well, those days are gone.  LONG gone! At this rate, they will be a dim and distant memory by the middle of next week.

Not that I am complaining by any stretch of the imagination.  No, it really feels good to get back to work in the gardens again. I am truly of the opinion that at the end of the day you should smell like dirt…and that broken, dirty fingernails are actually a badge of honor. But some of my gardening muscles must be woefully out of shape.  It was definitely a week for the ibuprofen as we got back in the routine of another growing season. 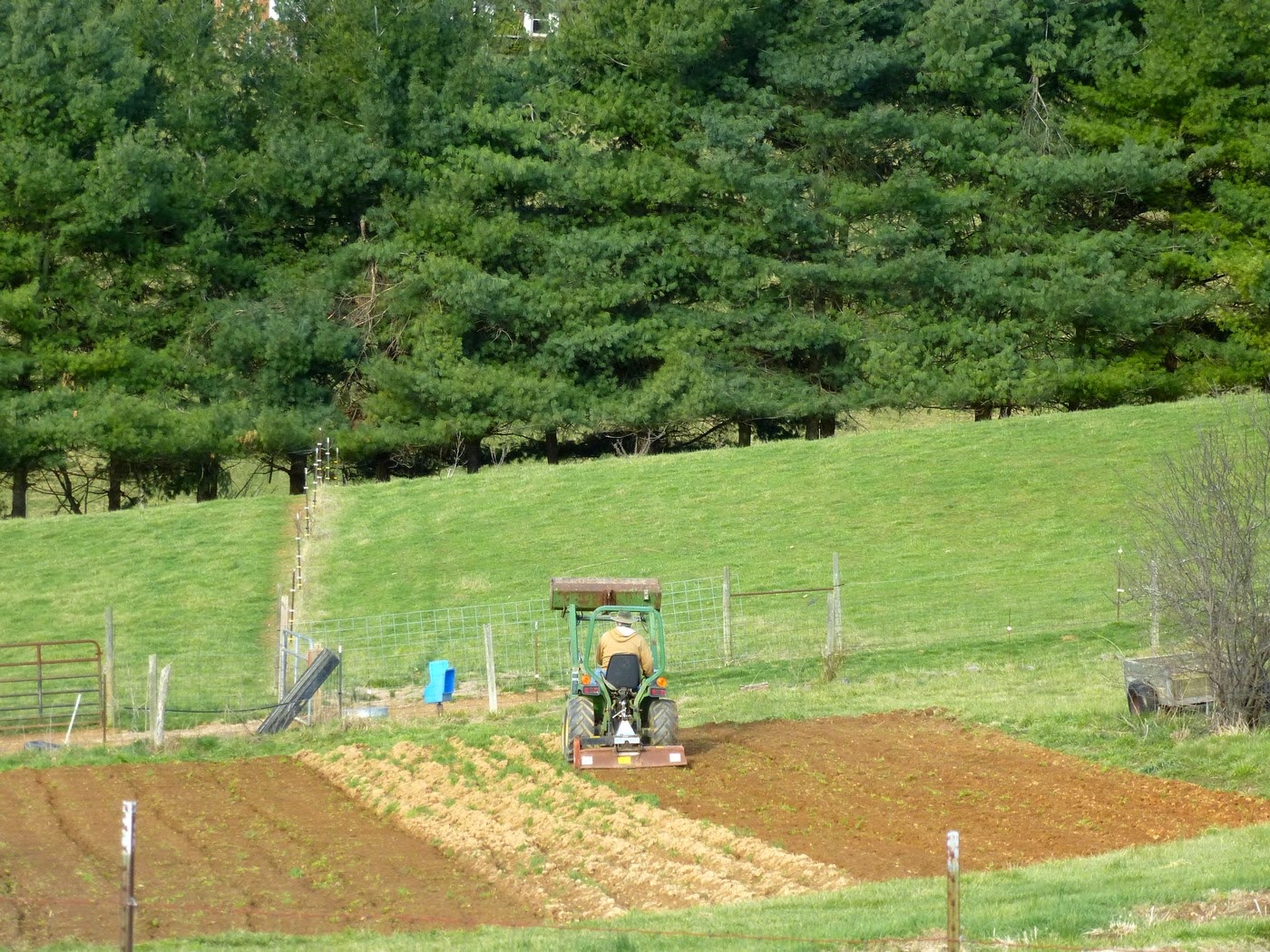 As I left for the town run on Monday, the Boss was making the first pass through the garden with the big tiller.  He had it all ready for planting by the time I returned.  We were scheduled to get all the brassica plants (the broccoli, cauliflower and cabbage).  But, first we needed to unload the feed and fertilizer that I had procured in town.

I gave in to the urge for beautification and bought some rosebushes for the flower bed on the side of the house. It’s not like we really need another project, but they looked SO pretty! (we’d been talking about doing this for a LONG time) And, since we use the side door ALL the time, I would really like it to look pretty. I honestly don’t know why we even have a front door…even visitors walk straight into our kitchen from the driveway!

But, unnecessary rosebushes and future beautification projects aside…we actually completed all the things on the to-do list and then some. That’s always a good feeling!

After unloading from the town run and eating a quick lunch, we got to work planting the 800 or so transplants that had been hardening off in the backyard. Each plant was dipped in fish fertilizer and then plunked in the ground.  The Boss then tucked the dirt in around them. We finished that job just in time to do afternoon chores.  There was rain predicted for most of the week, and we were hoping the rain would water the new transplants for us. Not a drop in sight, so prayers were said that the forecasters were right… 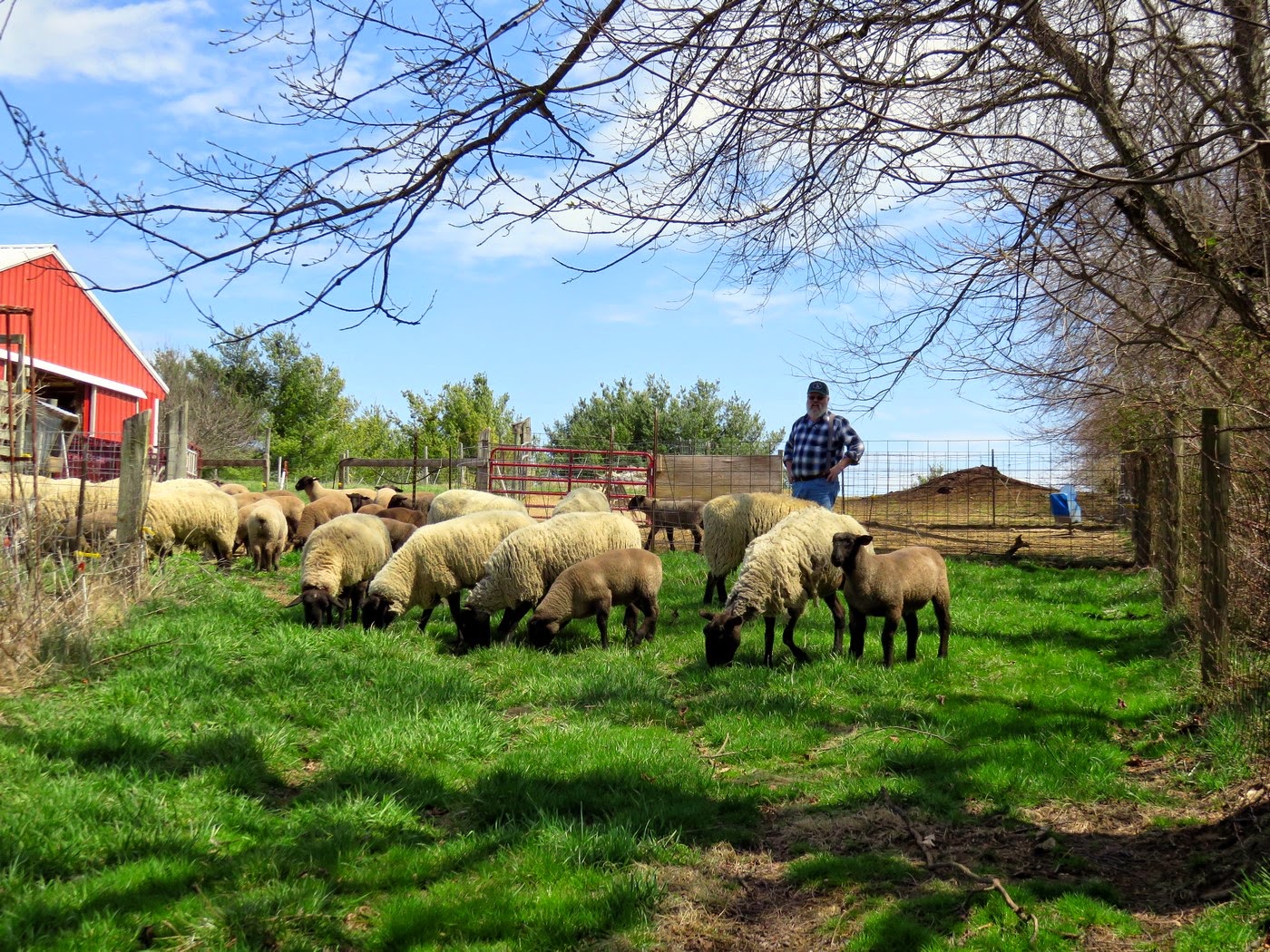 In addition to transplanting, we turned the sheep out on fresh grass.  Up to now, the cold overnight temperatures had kept the grass from growing and the sheep were confined to the winter paddock, supplemented with hay.  As the last flake of hay was consumed, the grass finally reached a point where it was obvious that we could turn the sheep out without adverse effects on the future growth.  They acted like they had gone to sheep heaven and grazed back and forth all afternoon.

The warmer weather and greener grass allowed us to get batch #1 of broilers out of the brooder and onto pasture.  That meant they needed to be caught, crated and transferred to the outdoor pen.  Despite the fact that I clobbered my head into the brooder ceiling, dropped the chickens I had carefully gathered, fell down into the chicken poo, and made the Boss wonder if I had actually knocked myself out…the job went without a hitch. (I did have a residual headache for about 3 days) In less than 2 weeks, we will be processing that batch of broilers for Market!  There are customers waiting anxiously for the first chickens of the season.


Then, we weaned the lambs. (separated the lambs from the ewes)  Yes, that does explain the awful noise that’s coming from the hill. By way of explanation, I re-posted "No Silence of These Lambs" on Facebook.   The noise and chaos gets a little old, but after about three days, everything calms down again as the lambs figure out how to graze by themselves. We finally reached that point on Saturday afternoon when the hunger for grass won out. Calm has returned to the hill once more. (thankfully...the constant noise certainly didn't help my headache!)

Since we had all the sheep in the barn, it only made sense to pull the “hayburners” and take them to the stockyard.  There were a few ewes that we knew we wouldn’t be breeding for 2016, and since they would no longer be feeding their lambs, there was no point in having them hang around any longer than necessary.  We also took two of the bottle lambs that weren’t growing out well and were quickly becoming a huge nuisance.  While taking sheep to the stockyard never yields much cash, it does put an end to some of the expense. Hopefully, the check will come this week.

We spent more “quality time” in the hoophouses, and the Boss got the strawberry plants planted.

Two big boxes of onions arrived and there are thousands and thousands of onion plants waiting for us in the shop.  Planting them will be job ONE set for Monday, since it looks like April showers are indeed going to be a factor this week. Again.

Just when we were beginning to think that we might have to water in all the brassica plants, stormy weather icons began to fill the forecast. There was talk of the first thunderstorm of the season. The images on the radar and the rapidly blackening skies were just a little concerning.  Once weather station actually noted that if it had been summer, we would have been in “deep doo doo” (direct quote). In other words, some severe weather was headed our way.  (devastating tornadoes did pass through parts of Illinois) Ever since the Derecho in 2012, those big red/orange blobs on the weather radar freak me out just a little.

We escaped the devastation, but did get some measurable rainfall which did the brassicas and the strawberries a world of good.

In between planting and harvesting and weaning, we made a dump run and de-wormed the lambs, I started seeds for the first squash and cucumber plantings (and more lettuce and spinach) and the Boss mowed grass for the first time of the season.

And, then, it was time for Market once more.

That was a quick week! I think time does actually FLY this time of year.  There are never enough hours in the day.

Saturday’s Market enjoyed some beautiful weather (until the end when the wind picked up). We sold out quite early.  While selling out is a great thing, having a good supply is also good.  This time of year, we have a hard  (read---impossible) time keeping up with demand, particularly for greens.  It is quite difficult for many customers to understand that the weather in January and February is STILL affecting our crops.  All the greens we are selling now have been growing (or trying to) since much earlier in the year.  The seedlings I planted this week won’t be ready for harvest for at least three weeks, quite possibly longer. And, that broccoli won’t be ready for harvest for at least 6 weeks. There’s a lot of advance planning and work that go into getting the crops growing so that they will be ready for harvest. (hmmm, I think I feel a blog post coming on) But, all in all, it was another great Market day.

Now it’s time to catch up on some of the inside stuff that didn’t get done all week.  By the looks of my desk, I really…really need to spend some time on the computer doing bookwork.  While this is probably not my favorite way to spend great quantities of time, (especially when it’s a pretty day)  I do like to have all those little figures lined up, the accounts tallied and the checkbook balanced. So, I guess I’m headed to the office…

…wherever you are and whatever you’re doing.

I do hope you’ll come “visit” again soon.  (just be sure to pat the dog and cat on your way in!)