A Friday Funny - A New Project for Gus 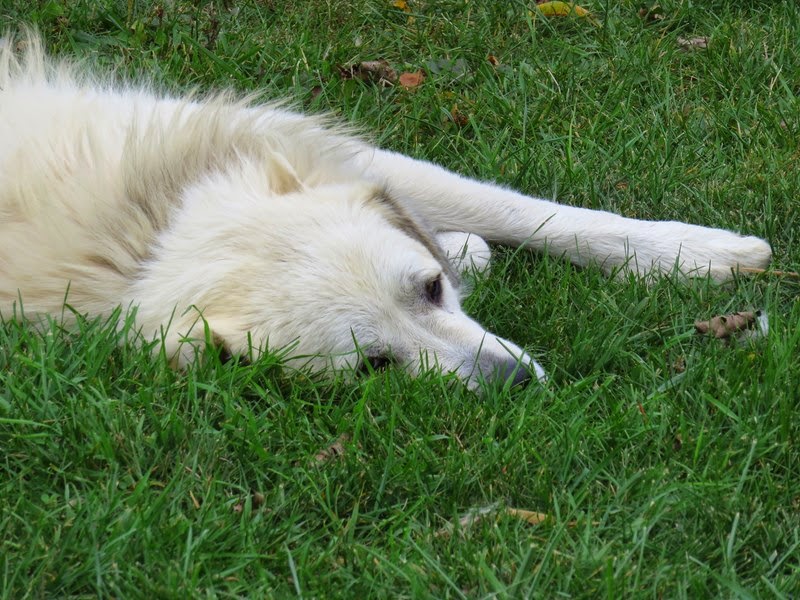 The lambs are big enough that they don’t require much attention (human or otherwise).
The ram and ewes are finished working on their “annual project” and have gone down front to graze.
There are no new chicks to check on.
The transplanting season is finished, so there are no plastic flats to chew.
The field and garden work are winding down so the humans don’t need following all the time.
And, all that daytime napping gets a little old when you’re still a puppy.
Sigh.
Then, Wes dropped off a load of firewood for winter. 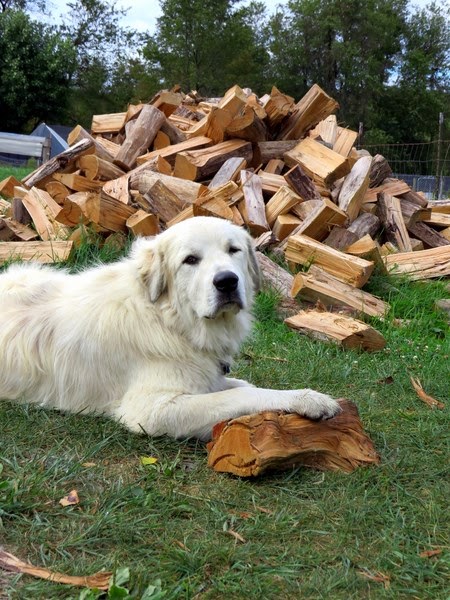 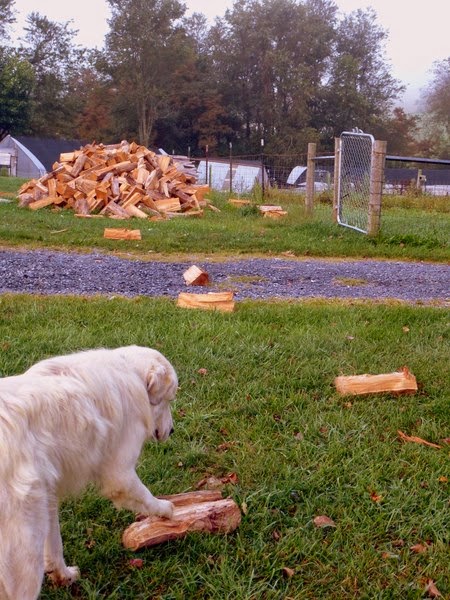 Inspiration hit and Gus took matters into his own paws.
First, he installed speed bumps across the driveway.  The Boss and I were totally unaware that farm drag-racing was a thing.  But, we slowed down anyway.
After a while the Boss picked up the speed bumps because, well, they were a nuisance and the Boss wants a place for everything and everything in its place.  The place for firewood is NOT in the middle of the driveway!
What we did not realize was the speed bumps were just the first stage in Gus’ construction project.
No, he had a more ambitious goal in mind. 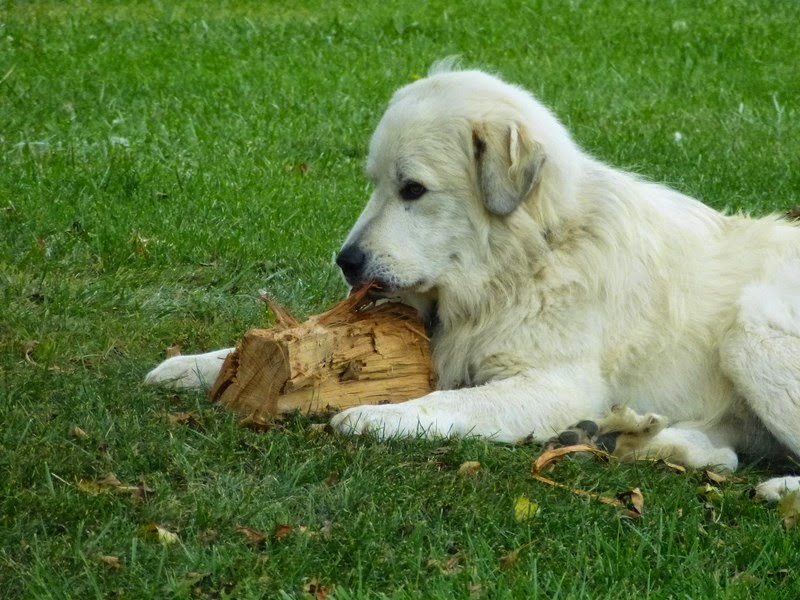 First, he selected every piece with care.  Then, he meticulously trimmed each one. This kept him occupied for quite some time. 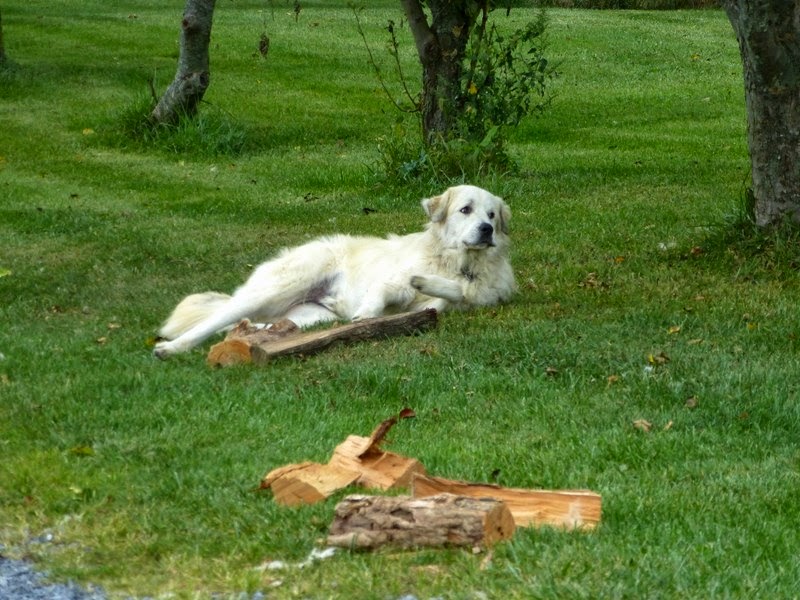 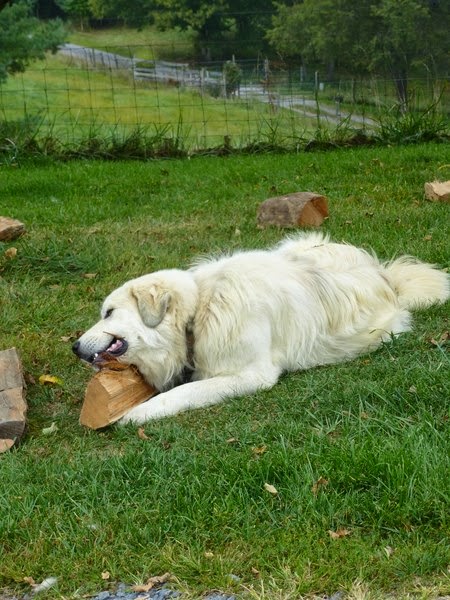 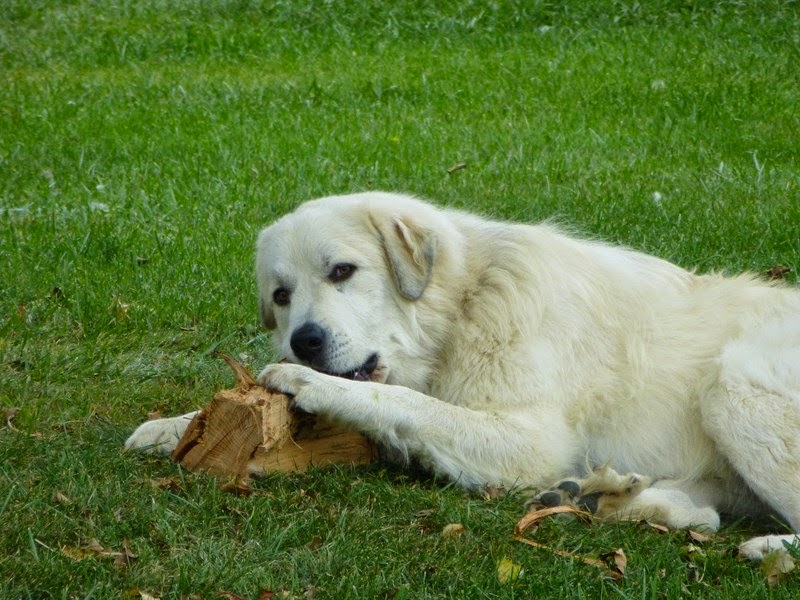 Then each piece was placed in the orchard.  In a circle. (well, pretty close) I can assure you there was no human intervention or assistance. 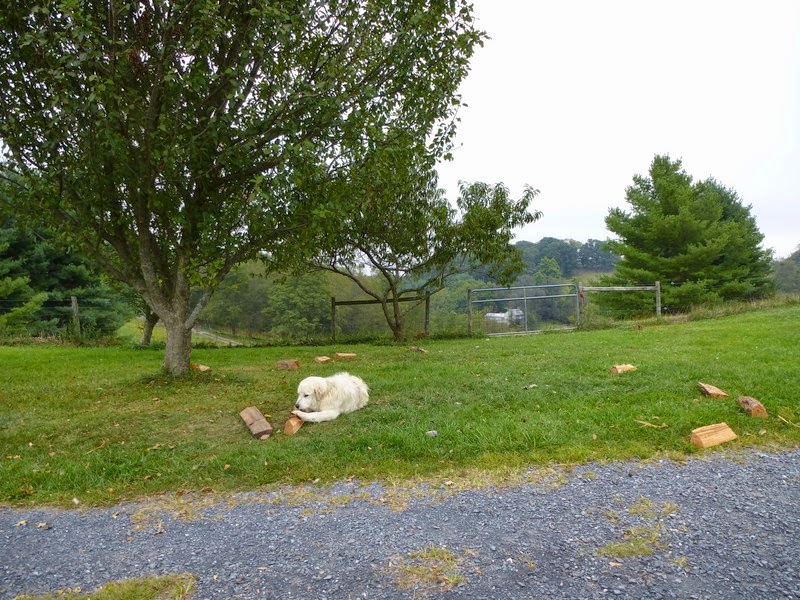 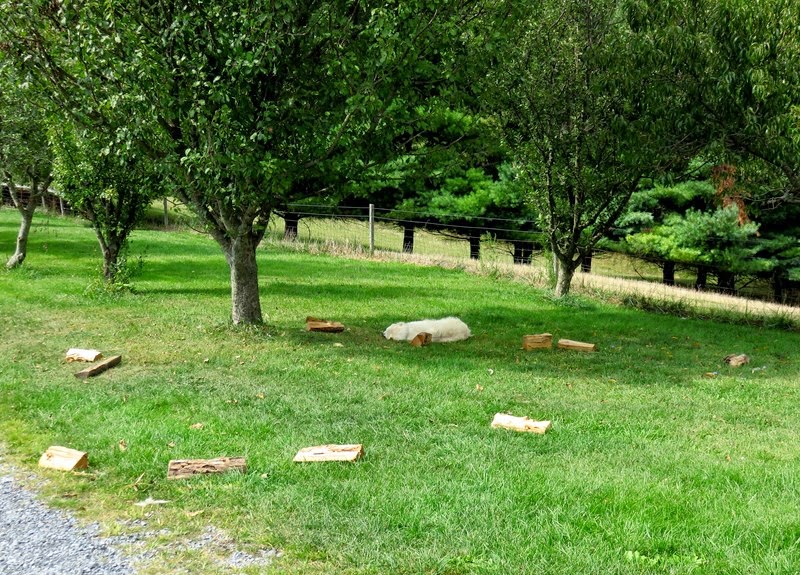 While the pieces weren’t standing on end, they were spaced out in what looked like a circle and we began to refer to it as “wood-henge”. We joked that perhaps we could sell tickets.  It was weird and more than a little amusing, but the real purpose of the arrangement escaped us.

Until…
I looked out the door and saw this. 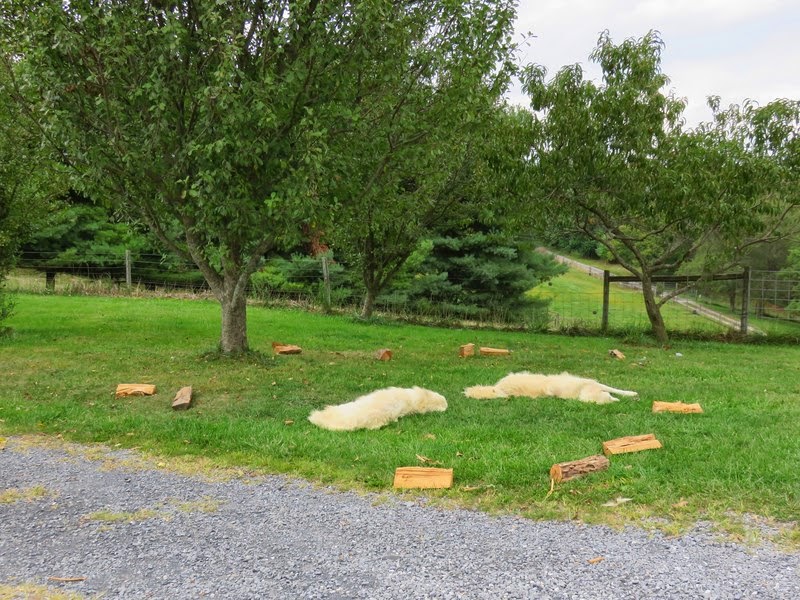 Apparently, all that work was done to have a perfectly designated daytime napping place for two guardian dogs. 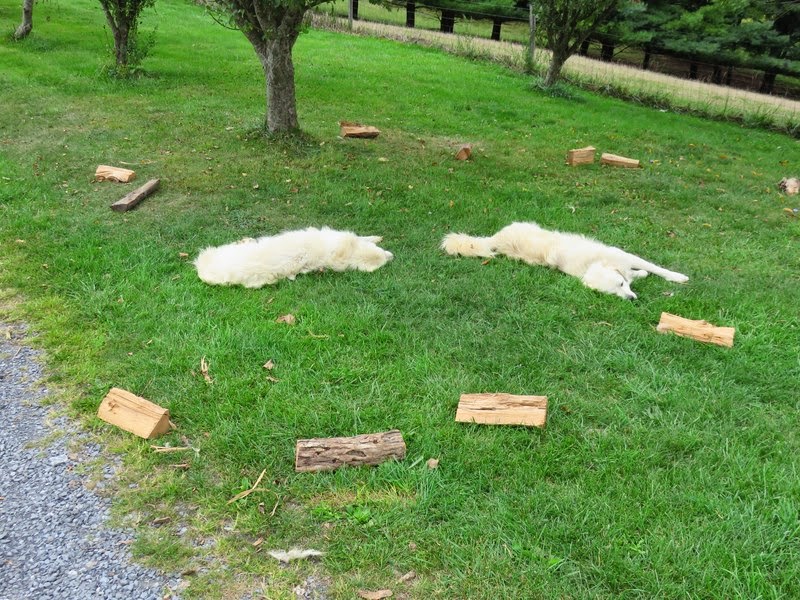 Every time I would look out the door…there they were. 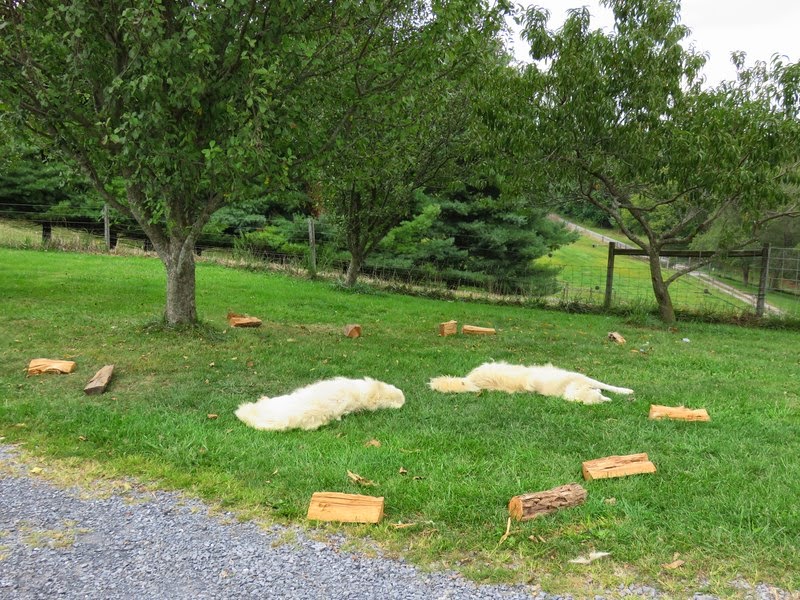 As a sidenote, this area is also where varmint killing takes place.  I  found at least one ‘possum and two rats. (ewww)

Yes, “wood-henge” was rather amusing, but watching Pyrs sleep is almost as scintillating as watching paint dry…or grass grow (so the chances of any ticket sales were slim at best) , so it was dis-assembled like the speed bumps before it.
It seemed a pity after Gus went to all that trouble.
But, last night I saw him climbing the woodpile in search of the new “perfect” piece of firewood.  I’m certain another "project" is brewing in his ever inventive canine mind. 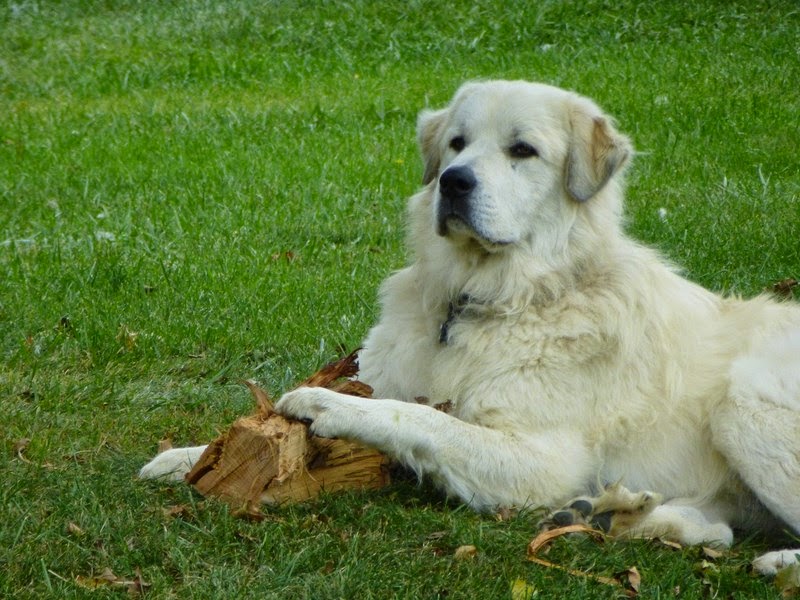