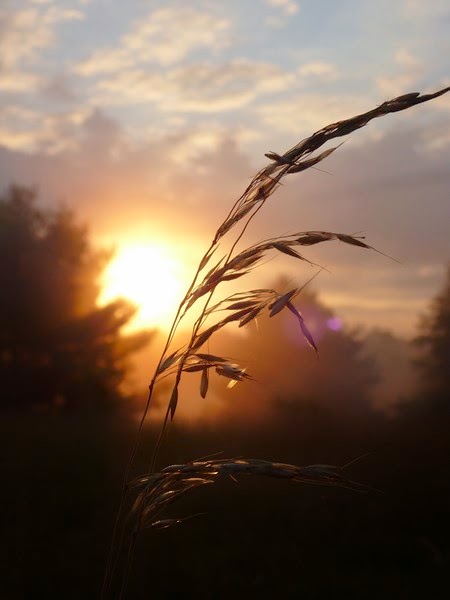 You know…it’s a good thing that I take photos all week so I can do our little Sunday Walkabout.

Oh, I’m glad you asked.  I just realized that I would never remember all the stuff that happens around here in the course of a week without photos! (a lot of it never makes it to the walkabout, but at least I know it happened) 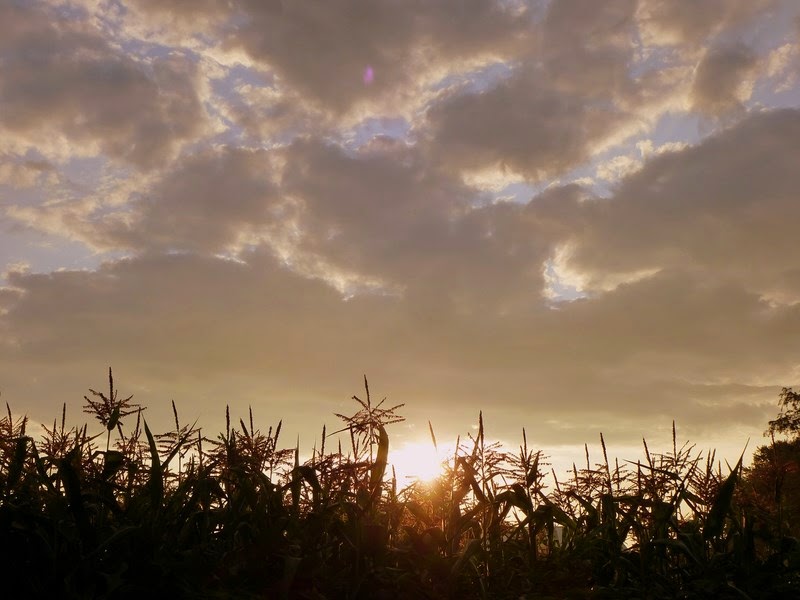 This week was hot…and dry.  Oh, wait.  It’s July.  That’s not news.  But, it was/it is…and I was seriously beginning to feel like I was melting and dehydrating at the same time.  (is that even possible?) After a while, the heat and lack of rain begin to wear on me.  It’s pretty easy to get discouraged this time of year…but, quite honestly to quote Sweet Brown “ain’t nobody got time for THAT!”  So, we just keep plugging away.

After I got back from the town run, the Boss and I hauled the last load from the hay guy. The barn is full to capacity and we will have to feed out some hay in order to use one bay for the creep pen for the lambs during the wintertime.  When you’re all sweaty and hay covered while you stack hay, it’s really hard to imagine that in just a few short months, the cold weather and snow and ice will be making a comeback. This year, I know we’re ready!

It’s that time of year when everyone is talking about corn. While the field corn around the community is looking pretty good, we only grow sweet corn, and a very small patch of that.  Every year we say we’re only going to put in enough for us…and every year…we plant enough to sell, too.  Corn is always a hot item at the Farmers’ Market. Our corn hasn’t really gotten the proper attention this year (there are some major weeds) but it was looking pretty good.  Yes, I am speaking in the past tense.  You know that rain I wanted SO bad?  Well, we got some, finally.  It came down in buckets along with some gusty winds.  …and you know what happened.  Yep, flat corn.  The Boss worked on righting some of it, but, we’re not sure if it will remain standing (there are more storms in the forecast). But, we shall see.  I am not exaggerating when I say it’s always somethin’!

In other garden news, the fall potatoes began sprouting this week.  We were both relieved to see those little leaves begin to push through the dry, hard earth.  We hadn’t had any rain since planting, and irrigation isn’t a real option in that particular spot, so the rain was an incredibly welcome sight (despite the slightly flattened corn).  The rain also prompted the last planting of beans to sprout as well. Yes, more beans…  I should be picking beans until the first frost!

We spent some time planting some more brassica plants this week, too.  This time we planted about 700 broccoli, cabbage and cauliflower plants for fall picking.  There are a few more starts that we could plant, but we’ll have to figure out a space for them. I’m not sure when or if that is happening. We got the planting done before the rain, so it looks like most of the plants are transitioning well. 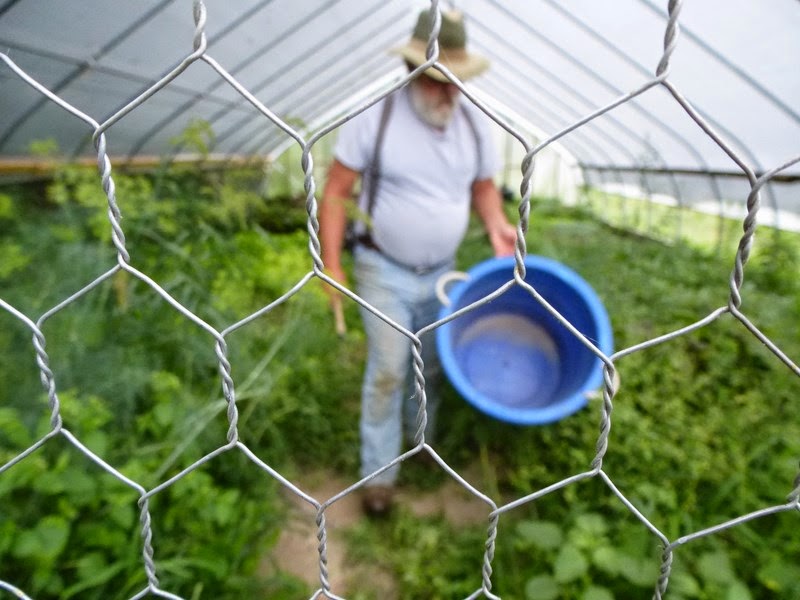 Since the hoophouses were beginning to look like jungles, the Boss took his weeding tools and buckets and cleared them out in anticipation of fall planting.

I would like to say that I was entirely organized and had all the new plants ready to go…but…no, I am not and no, they aren’t.
So, I spent some time playing in the dirt in the greenhouse and got about half of the seeds started for the fall/winter hoophouse crops.  Look, the arugula has already sprouted! 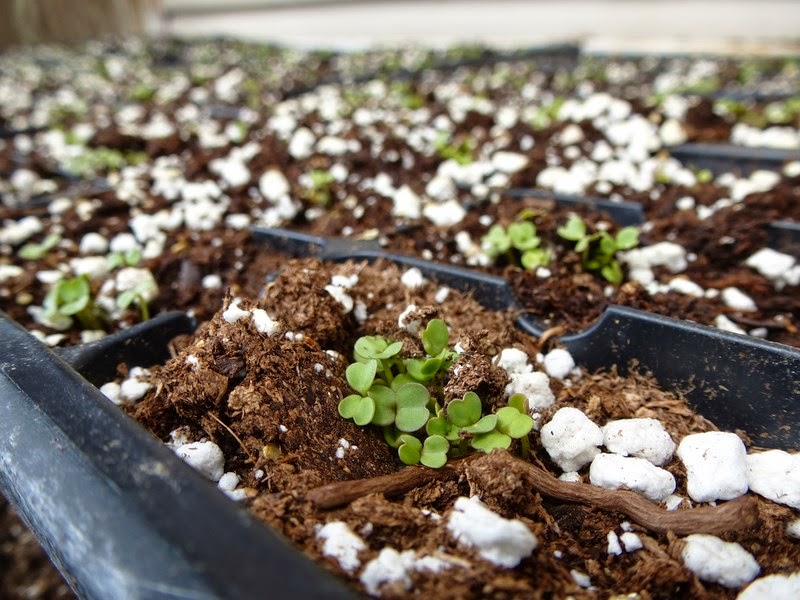 Thursday morning started with a slight surprise.  I had been thinking that Waylon had been acting rather skittish and I wondered why.  Imagine my shock when I found a big, fat ‘possum bathing in his water tub! I can’t stand ‘possums.  They’re like big, hairy, slimy rats…with sharp teeth…they carry disease and they will eat eggs and kill young chickens. There is no place for ‘possums on the hill and the Boss promptly disposed of this one.  But, I think that Waylon is still rather bothered that his paddock (and water tub) were invaded in such a way. 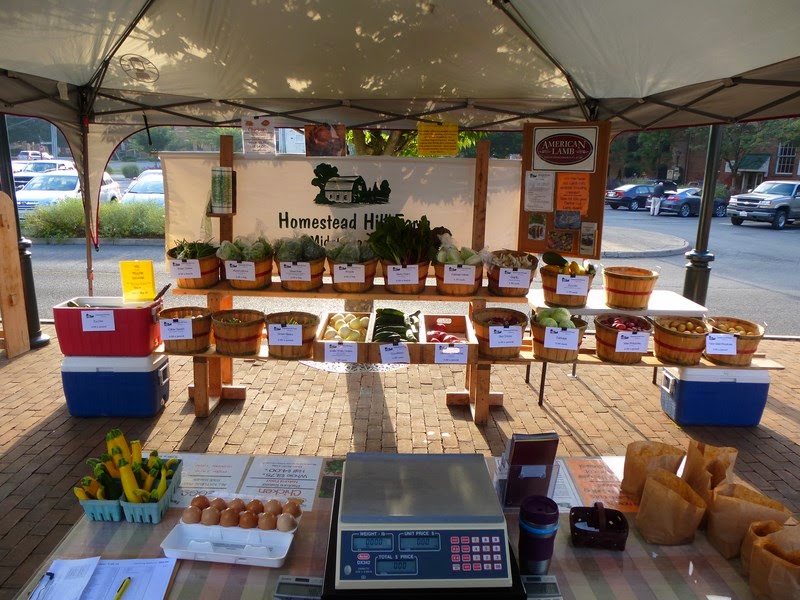 This week’s Market paled in comparison to last week’s record-setting day, but it was still a good day.

The much-needed rain will make for a great abundance of produce next week, as I know that the newest planting of green beans will be ready, along with more tomatoes and broccoli!


Here's a view of some of the gardens in full production. 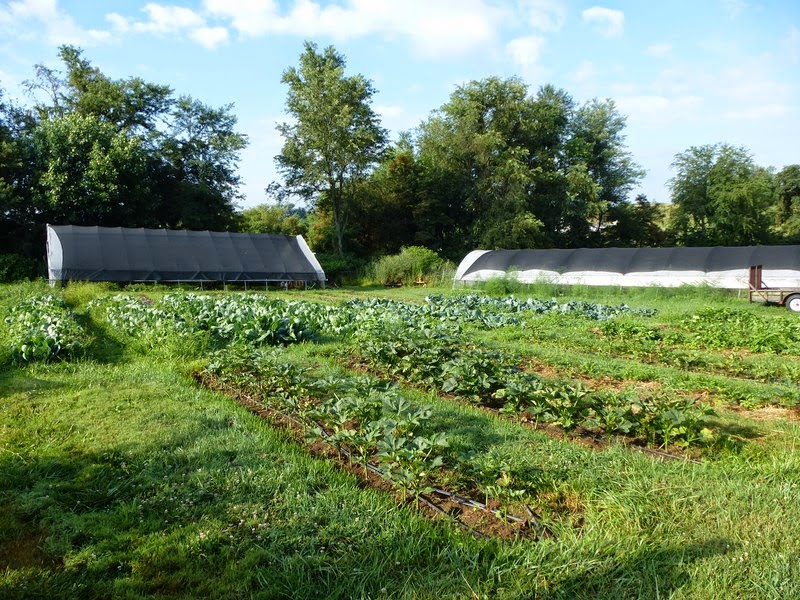 …and that brings us to the end of another week on the hill.

Hope you had a great week and a

Thanks for stopping by…come visit us again real soon!

P.S. I hope you don't mind me sharing this, too.   I've spent a lot of time thinking/praying for one of my farming friends from cyberworld who has spent a great deal of time at the hospital with very, very sick children this week.  I know just how scary it is to know that your child has to be life-flighted to the hospital...ICU is frightening, too...and then the bills!  Jodi and her husband faced this with TWO of their children in the course of a week.  Her story can be found here.  Read this. If you can help or pray or whatever, please do!