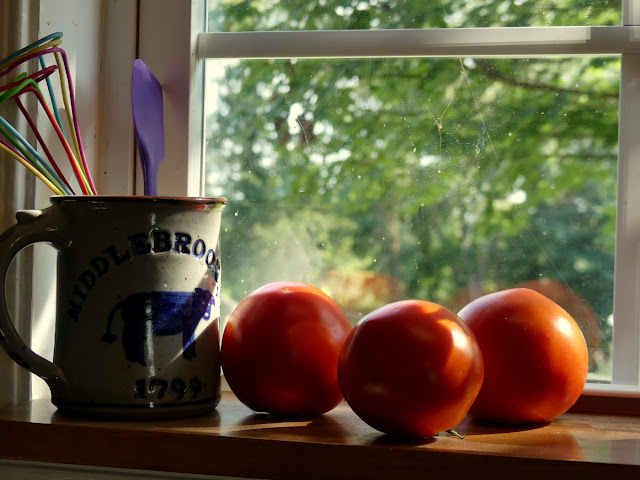 The midway point of the year. The halfway point of the Market season. And, the arrival of back-to-school sales that means it can’t be long before we are hurtling headlong toward what has become “hallow-thank-mas”, with one holiday observance flowing right into the next.

When the to-do list seems to grow exponentially overnight. When the abundant harvests can be overwhelming. And, the kitchen table has suddenly sprouted a crock of pickles, a box of pears and a bowl of tomatoes. Not to mention the zucchini that are multiplying as I write.

Yep, it is definitely July!

It’s been hot.
Oh, so very hot. And, we won’t even get into the humidity. A friend said she felt “like a damp, used washrag” and I though that was a pretty apt analogy. That would also describe my energy levels most days.

But, hot or not, energized or not, there’s work to do.

We’ve hauled lambs and picked up lamb chops. (sold ALL the lamb chops and had a personal best Market, too!) There are more lambchops waiting at the processors.
We’ve picked and planted and re-arranged.
In the past week, I picked well over 100# of zucchini. Better start digging out all those recipes!
The fall crops have been started, and the late crop of potatoes is already coming up. The old ewes will be heading to the stockyard this week and it’s almost time for Otis to “meet the ladies”.

July is also when anticipation for the big stars of summer---sweet corn (not to be confused with field corn) and tomatoes---reaches a fever pitch. While the tomatoes are starting to trickle in, the corn here on the hill won’t make its appearance for another couple of weeks. Presently it tempts and teases as first the tassels appear, then the tiny ears with their oh so delicate silks. As the silks grow into what looks like wild, glorious hair, the pollen forms on the tassels, its unique scent filling the morning air. (the smell of corn pollen is both sweet and sultry---it would make an amazing perfume) Once the pollen falls onto the silks, the tiny kernels within the ear are pollinated, begin to swell and in two short weeks the corn is ready. I read somewhere that the cornfield is all about sex, but, I probably shouldn’t tell you that since it just makes the conversation all weird and awkward. Honestly, farm life…all of agriculture...revolves around, depends upon, the “facts of life” and “the birds and the bees”. However, we’d all feel better if I just leave that one right there and move on to safer subjects.

(but, you must see... pollination is happening everywhere!)

While I suppose farm work could become the entire focus of our lives, I actually think it’s important to do other things…like EAT some of this good stuff we’re spending so much time growing.

To that end, we were enjoying some awesome tomato sandwiches the other day when a great commotion broke out in the backyard. Gus and Karma were sounding an alarm about something. Since it was getting more insistent, and enjoying a quiet lunch was out of the question, I went to investigate.

Their barks have different meanings. There’s the “oh my god, something woke me up…better sound an alarm and look like I know what's going on” (this often happens when we can hear the reverse indicator on the firetruck down in M’brook) Then there is the “get out of the yard, you intruder!”  (this one happens about 2am when deer, foxes or rabbits pass through the vicinity) Then there is the “I hear you varmint…and I am a big, big dog! Go away.” (this is for the coyotes that yip along the ridges on clear winter nights---it is accompanied by a low rumbling growl---and it is intimidating stuff) Then, you have the all-purpose bark. This covers anyone driving on the lane, in the driveway or a half mile down the road if they need an engine tune-up or new tires. The UPS driver gets a special bark. There’s the squirrel bark and the daytime deer bark, the “we found a ‘possum and don’t know what to do now” bark. I swear there is a “butterfly bark” and an “I dunno, just felt like making some noise” and “mama, where ARE you?” bark.

But, this didn’t seem to fit any of those. It was kind of a hybrid ‘possum, varmint, mama bark.

Outside, both dogs were staring at the cellar door. The cellar is only accessible by this little door that is down in a hole at the back of the house. It might behoove me to mention here that we never use the cellar (or the door). At all. I should probably tell you that story, but it will interrupt THIS story, so…some other time.


Anyway, down by the door to the cellar is a groundhog. A fairly good-sized groundhog. I suppose he/she fell in the hole in an attempt to flee the giant dog attack. It is too deep for the dogs to get down to reach the groundhog and too high for the groundhog to jump out. Thus, the chaotic barking.

Groundhog dispatched and crisis resolved thanks to the Boss and his sharpshooter skills. Karma apparently wanted groundhog for her lunch, so she carried it away. Later, we realized she simply wanted to torment Gus, and we (the Boss) disposed of the mess.

Now, before you feel sorry for the “poor woodchuck”, groundhogs are nuisance animals and relocating them in Virginia is illegal. So, good riddance. Oddly, Facebook reminded me that Gus and Karma ran a groundhog up the tree in the backyard exactly one year ago. (how weird is that?) 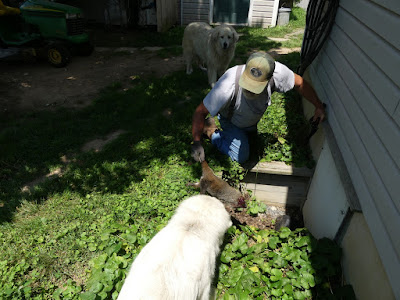 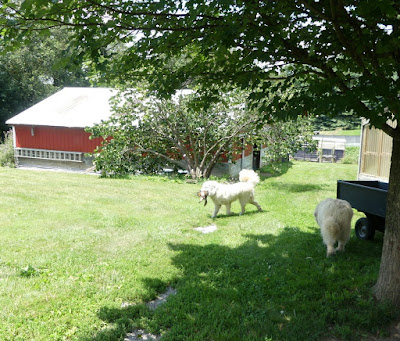 It’s been an interesting month for animal sightings. There was a deer in the back field with the lambs. I could have sworn that one had antlers and snorted like a buck. Then, there was a big doe in the orchard on the Fourth of July. We had never had one so close to the house because generally the dogs keep them at bay. However, the dogs were cowering under the shed since we had the double-whammy of fireworks and a thunderstorm in a single evening. (they finally emerged just before daylight…to bark at something else)

Then, I was outside processing veggies after supper and the hens started making some weird noises. Now, quiet life in the country is a misnomer, there is always something going on. The hens keep up a near constant “conversation” but this was far more insistent. When I went to check, I found a little red fox looking at me from the other side of the fence. (thankfully OUTSIDE the hen yard) He or she must have had a hankering for a chicken dinner. With no weapon or even my phone, my only option was to scream like a crazy person at this small, wet fox. It turned tail and disappeared. I set up a trap (baited with a piece of fried chicken), but never caught anything, or saw the fox again. It has probably retreated to its den, so highly traumatized that it will never return (constantly recounting to the other foxes the story of its horrifying encounter with a human who behaved like a lunatic) or even attempt to eat chicken.

Last Saturday, when I was putting stuff in the car for Market, I noticed something in the orchard…this time it was a smaller deer. I didn’t think Karma was going to notice her, but when she did…! That deer took one look at the big white thing coming at her and …whee…she sailed through the air… over the fence…through the field…over another fence… she was long gone…before Karma even got to the trees.

But, with the deer pressure increasing, we are doubly glad we’ve cut down on the garden spaces.

I just realized this post has absolutely no rhyme or reason. No purpose or theme. And, I can’t do a thing about it. (I suppose I could start over…but, ain’t nobody got time for that)

So. Here are some equally random shots from around the farm for your viewing pleasure. 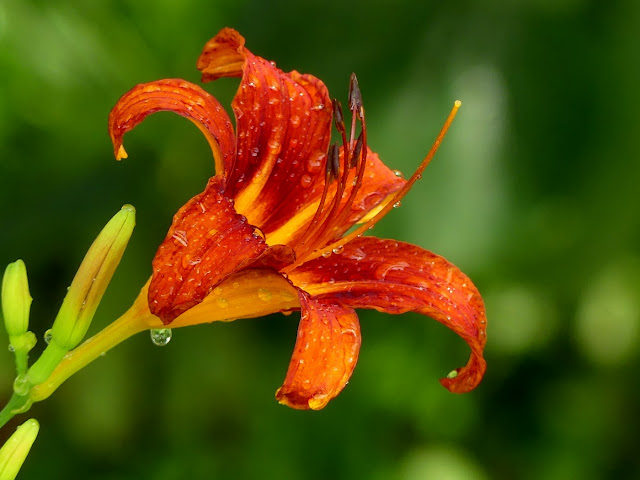