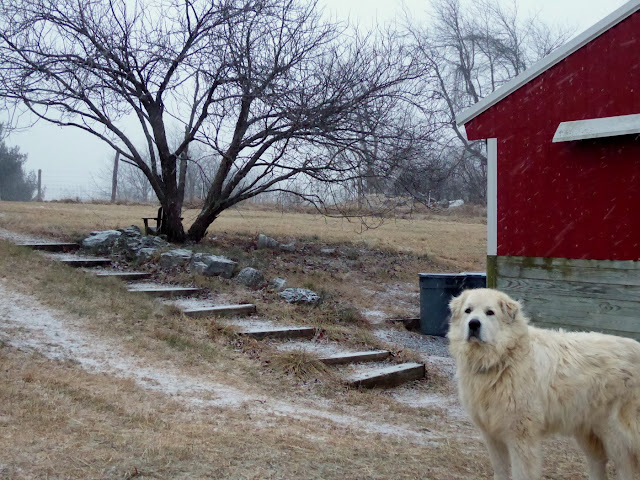 That means the big push of lambing is over (actually there was no push this year, it just sorta happened), the groundhog saw his shadow…meaning there will be six more weeks of winter (I'm here to tell you it's gonna be longer than that before it's really Spring), and the landscape has faded into a somewhat depressing monochromatic palette, sky and earth seem to meld into one another on cloudy days.

On the other hand, the seed orders have been placed, some much-needed precipitation is on the way, and we got the first broiler chick confirmation email. Things are moving right along as we get a few days closer to Spring.

That being said, nothing much happened on the old homestead this week.

This time of year is all about maintaining.

Maintaining may sound simple, you just keep on going. Right? It’s just a matter of “providing with the necessities of life and existence”. That certainly doesn’t sound too challenging. Around here that means lots of feeding and watering.  And, to that end, the Boss hauled a load of hay for the sheep. (and he unloaded and stacked it alone…YAY, Boss!)

Maintaining can be somewhat boring, but keep in mind it is essential work, without it there is no planning for the future…heck, there is no future. But you just never know what’s going to happen next. 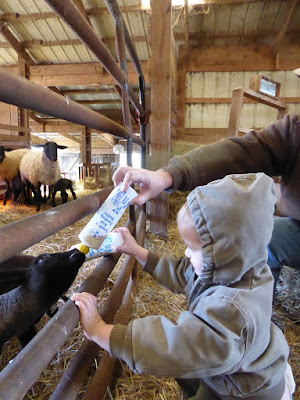 I honestly thought the first one was dead when I walked into the barn at daybreak to do chores. Her head was caught in one of the interior fences, her body turned backward and motionless. Horrified, I dropped everything and rushed to correct the situation. I was somewhat startled when I touched her and she jerked, letting out an enormous BAA! A small manipulation on my part and she was freed. She ran directly to her mother, getting a much-needed drink of milk. No harm done. (although the Boss did do a little repair job to the fence)

Later in the day there was a bit of commotion behind the barn. Further investigation revealed a lamb with his front legs in the stocktank. He looked rather resigned to the fact. He couldn’t get enough traction with his back legs to jump forward. And, he didn’t have the mental acuity to simply pull his front legs out. So, he was just standing there…yelling every once in a while. Needless to say, this was disturbing the other sheep who simply wanted a drink of water. Other than being a little soggy, he was none the worse for wear once he was rescued.

No sooner had I freed him than I realized another lamb was complaining about something. This time one of the bottle lambs had gotten wedged between the gate and the wall. Some of the lambs are thin enough to scoot through the gap, but the bottle lambs are a little pudgy and she only got halfway through before it was apparent that her heft is not always an advantage. Again, an easy fix.

Then, there was the lamb with the tail…

Lambs are born with long tails. Most shepherds dock (cut off) these tails as a matter of farm hygiene. Those long tails collect excrement and harbor all sorts of nasty germs, so the animal is far healthier without it. There are a couple of methods for tail removal. Obviously, you can cut them off. But, that’s bloody and gross. I’m not a big fan of bloody and gross, so…

Here on the hill, we use an elasticator tool to apply a strong rubber band around the tail (when the lamb is about 1 day old), it squeezes off the blood supply and the tail withers and falls off after a week or so. This has the unsettling side-effect of little, unnecessary lamb tails scattered around the barnlot, but has always been an effective method for many years.

One of the single lambs seemed to have scours. (diarrhea) While this can be a sign of serious illness, it often happens to single lambs with big appetites. (it is easily corrected) But, her long tail was drenched. It was supposed to get bitterly cold and I was certain this would freeze. (or at least make her very cold) After I gave her some medicine that would clear up the condition, I made the decision to go ahead and cut the tail off. Generally, there is no blood supply left to the tail after a short while. So, this should have been an easy fix.

It bled. It bled a lot. She shook, blood splattered. I applied some medication…and that splattered. There were red blood dots and blue medicine spots everywhere. And, it was still bleeding. But, I finally got it stopped. She went to her mother. All was right with the world.

The next morning, when I walked in the barn for morning chores, she was lying in a pool of blood. Seriously, it looked like a crime scene. I can only assume that prior to my arrival, she got stepped on, causing the wound to bleed again. I had no idea why it was bleeding at all, but that didn’t matter now. There was a lot of blood, so time was of the essence.

As I surveyed the supplies in the barn, the bottle babies were gnawing on the leg of my coveralls, looking for their breakfast, the ewes were milling about, complaining loudly about my tardiness, and I was scrambling around with this bleeding baby. The environment was not conducive to creative thinking.

I dunked her tail in iodine, hoping that the drying action would stop the bleeding. That worked until she started running with the other lambs. She was leaving a trail of blood behind her. I began to fear that she would bleed to death, although she seemed to be feeling perky. It couldn’t be bandaged, so I was running out of options. Finally, I put another band on her tail, hoping the added pressure would stop the bleeding. Ah, success!

You just never know what kind of problem-solving you might have to do before breakfast!

Other than that, my mental prowess hasn’t met any real challenges this week.

Because…we’re hanging in there…maintaining… “providing with the necessities of life and existence”. (which if you didn’t know…is a full-time job…on any farm)

Facebook just reminded me that FOUR years ago today I wrote THIS. A lot has happened in the interim. And, I’m not real sure I still possess that kind of eloquence…or even that kind of passion for what I do.

But, then again…at least we’re maintaining. And, we can hope we regain our passion and eloquence.

Thanks for stopping by! Come back and “visit” again real soon.

Hope you are having a Happy Sunday!