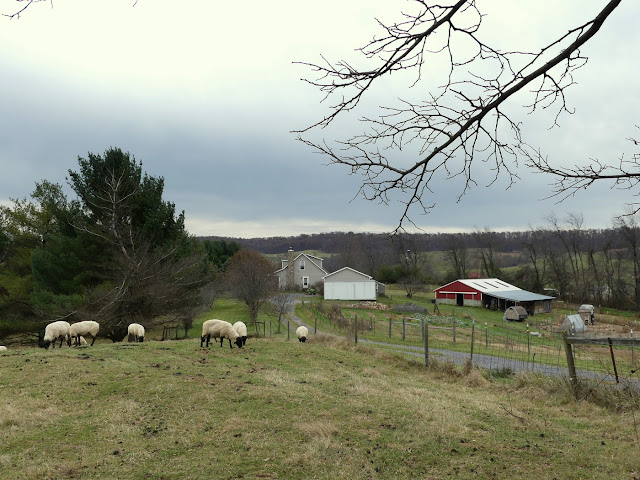 I am at a loss how to begin this post.

Because it’s mostly about THE END.

The end of the growing season.

The end of lambchop season.

The end of the Market season.

The end is generally bittersweet, but honestly, this year I am welcoming it.  THE END means we are done, free from the worries and pressures that go along with the season. And, maybe, just maybe, now that we have reached the end, we can take the chance to reflect, relax, and re-group during the off season that will give us the ability to face the future with a positive attitude.

The end of the 2017 lambchop crop meant the meat was processed, packaged and ready for pick-up. So, we traveled to the northern end of the Valley to retrieve those last lambchops just in time for the last Market. That made it possible to have our personal best sales total for the final day of the Market! Now, considering the year we had...to set a record of any kind was just awesome. It felt so good to finish out such a difficult year on a high note.

Thanks to all who made that possible!

This year we decided to try something different.

Did you know that President Wilson had sheep grazing on the White House lawn during World War I? I’m not kidding. Read this.  I’ve always thought that was a cool story and a great idea. A little bit of electro-net and the girls went to work “mowing”. In a couple of days, they have completely manicured the backyard. (although it is still a toss-up as to who is more startled when someone walks out the backdoor...us or the sheep)

They have nearly reached THE end of the grass and will be heading toward their Winter quarters once the Boss completes his annual barn-cleaning day early in the week.

While I guess that will mark the end of grazing season...we will then begin the countdown to Lambchop Crop 2018, because farm-life has no end. It is the very essence of the cycle of life.

Continuing on with our “end” theme... we can put an end to any type of worry or concern about my medical issues. When I went to the doc for my first follow-up visit (one more before I am cleared to return to all my “normal” activities) he read us the pathology report. Now, honestly I was a little concerned when he prefaced part of it with “don’t freak out”...but, there was cause for rejoicing in this month of thankfulness. There had been an area of complex atypical hyperplasia. Left untreated, this would have had a relatively good chance of turning into cancer. By taking it out, the potential threat comes to an end. (and so do any and all worries) The doctor was quite pleased that he had made the decision to remove everything while he had the opportunity. So, I feel better physically and emotionally.

The weekend meant it was time for the Market...and it is the END of the Market season. It's also the end of our TWENTIETH season as vendors. (I truly never imagined I would ever be able to say that!)

I know I answered the question, “so, are you glad it’s the end of the season?” about a thousand times. (okay...a hundred...) But, here goes one more time.

Yes, I AM glad to see the end of the Market season. And, I was particularly glad to see the end of yesterday’s Market. (I had no idea how tired and sore I would be after 5 hours of standing/selling) and, NO, we are not taking off for the beach or the islands...and NO, honestly, I do NOT want to find an indoor Market for the “off-season”.

Although, the END of Market season isn’t really THE END of growing/selling either. Like the rest of this life, it is indeed a cycle. Seed catalogs have begun arriving, so it won’t be long before we’re back to planting. After a short break, we will be making deliveries to our Winter customers downtown just like we’ve done for the past 10 years.  Because farming is indeed all about the cycle of life.

And, the work will never end.

Thanks so much for reading!

The Boss put together a video montage of photos throughout the season so that you can visit the Market virtually as well.