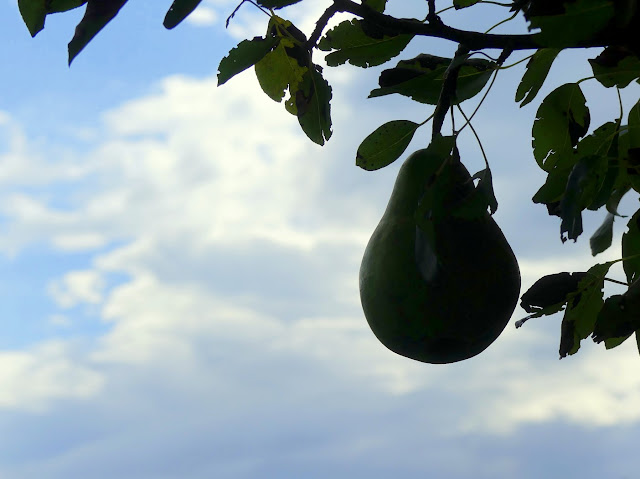 We have reached THAT point in the summer season.

Do you know what I mean?

THAT point has no specific definition. It certainly doesn’t have a definite date. There is nothing precise about its occurrence. But, it does happen every year, without fail.

THAT point is when it all seems overwhelming. The heat, the humidity, the bugs, the weeds, the ongoing projects, the yet to be figured-out projects, plans for the future, the worries of the world, the odd and random…all seem to converge upon us at once.

In other words, it’s August.

While August can be more than a little overwhelming in oh, so many ways. Although, it’s got a whole lot going for it, too. Did you read this? We'll go with that since we are trying for positive thinking this summer.

Currently, I’m struggling with the whole “positive thinking” thing. It’s taking some monumental effort on my part to keep from melting into a puddle that is both overheated and overwhelmed. But, I’m pretty sure you don’t want to read about that.

The week started off with MrB’s #2 birthday bash. I cannot believe that the grandsons are TWO years old. Sometimes, it seems like their own moms were just little, bitty babies. However, time marches onward.

Everyone seemed to have a great time! 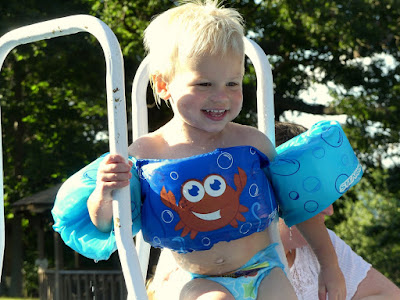 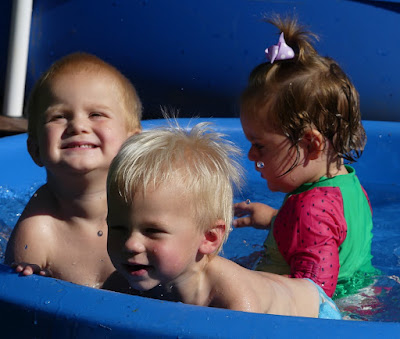 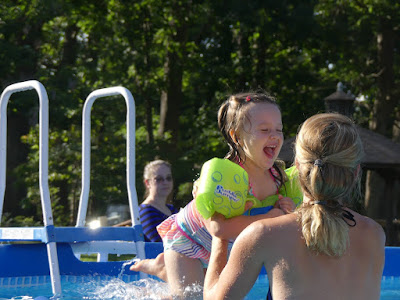 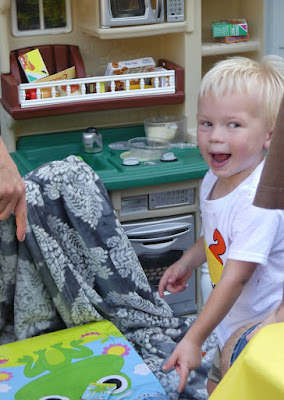 Back on the hill, it was back to work.

While rain is wonderful and we depend upon it for everything we have and do, sometimes it would be nice if we had control of the timing and the amounts. (not really…it would just be one more responsibility and one more area for potential errors) We continue to feel the effects of last week’s big rains. …and we had more this week.

Since we have come to expect this, we can act quickly when we see bottlejaw in the lamb flock and we know exactly what to do with a whole bunch of cracked tomatoes.

The tomatoes were blanched, peeled, chopped and frozen for winter-time use/sales. The hens had a feast of skins and seeds and over-ripe tomatoes. Nothing went to waste.

We turned our attention to the lamb flock. Fortunately, just one lamb has been affected with bottlejaw. Bottlejaw is brought on by a parasite. One of the symptoms is a swollen jaw (like the mumps in humans) hence, the name. Sometimes the animal’s entire face swells. This year any infections have been most persistent and taken several treatments to cure. So, all week we kept an eye on the ailing lamb. Since his appetite has never suffered, we are not terribly worried about him. Although he is a sheep…and they are notorious for dying for “no apparent” reason…so we will remain vigilant.

We had the whole crew over for B’s B-day supper. But, there is no photographic evidence of this event at all. That’s my fault. I got focused on frying chicken and making biscuits and laughing at the grandsons’ antics. Even without pictures, I’m pretty sure everyone had a good time. And, I know they got plenty to eat!

sometimes things get changed up just a little…

Thursday I headed to the chiropractor’s office. He’s been working on getting rid of my persistent headache brought on by my neck issues. Every time he fixes it, I manage to do something else to make it hurt. I’m sure he finds this perplexing. There is no way to explain the odd things that occur in my very un-conventional day-to-day life. I'm not even going to try.

When I returned, there was a four-wheeler parked directly in the middle of the lane. But, no driver. I didn’t see him anywhere. As I peered down the lane, I thought I saw part of the “cow-chasing team” and wait…was that a steer in the weeds by the edge of the lane? I couldn’t tell and I couldn’t stop because there was oncoming traffic.

I went down the road, turned around and tried again. Yep. I saw a couple guys in the lane. And, at least one cow.

There was only one thing to do. Park the car, turn on the flashers…and lend a hand.

As I hurried down the hill, I breathed a sigh of relief that I had chosen to wear boots and not flip-flops for my trip to town. (bare-foot cattle herding once was enough---did you read about my last encounter with these steers? )

There were two escapee steers and two very hot and irritated neighbors engaged in a battle of wills. In the middle of the lane. Apparently, this had been going on for quite some time and I arrived in time for the grand finale.

The cattle-chasers were getting weary when one steer suddenly bolted and ran the opposite direction.
Not a good thing.

The steer headed directly at me as I approached the bridge.

This was the moment of truth. If I let him get by me, it could be disastrous. Vehicles and steers don’t mix at all well. Hamburger in the middle of the road on a hot day would be disgusting.

I stomped my foot, waved my arms and hollered at the steer. He looked rather quizzical and then turned around and galloped over to meet his cronies.  The other escapee must have decided it was too hot for such nonsense, so he ambled back to the field as well. We whistled and pushed and drove them up the hill into a more secure paddock.

And, I can claim to be an honorary member of the "Mbrk cattle-chasing team"!

Apparently, a big buck (deer) got caught under the bridge, destroying the fence and losing his life in the struggle. The steers saw this opportunity and took a little fieldtrip. The Boss and I apparently missed their visit to our field earlier in the day. A round-up had ensued.  Then, as neighbor was working to fix the fence, the steers escaped again to find respite from the heat in the shade nearby. These steers are nothing if not persistent.

Everything got repaired and I didn’t see any more escapees when I headed out later to take Remy to the vet.

After the warm welcome at the vet where everyone told her how beautiful she was and had to hear the story of her rescue (read this),  she proceeded to behave in the most awful manner. She growled, she hissed, she even tried to bite and claw the doctor. Ordinarily she is the nicest cat ever. (she even tolerates the grandsons…to a point) But, she did not like those shots, not one bit! Then, she yowled all the way home. Not a fun trip.

But, she’s safely vaccinated and incredibly healthy…and back to her usual routine.

And, we were back to our regular routine of preparing for Market. This week there were grapes and pears to pick. And, it was time to harvest CORN as well!

It was a great Market day!