Since the broilers got our attention last week, it seems only fair that the sheep dominated this week’s news cycle. Although, unfortunately, it wasn’t all good coverage.

First thing Monday morning, we had to deal with a dying lamb. Seriously not the best way to start the week.

The heat and humidity are not kind to the lambs. They are stressed by the heat and the damp conditions allow the parasites in the soil to flourish. Grazing exposes the sheep to ingesting these microscopic organisms. Once inside, the parasites rob their hosts of crucial nutrients. Small lambs just do not have the body mass to withstand the anemia (and other problems) caused by parasitic overload. One of the reasons we feed the lambs is so that we have close contact with them on a regular basis and can be aware of any health issues. One lamb seemed a little “off” at afternoon chores, but ate with the others. Since there were no specific symptoms, I made a mental note to check her in the morning. However, by that point, she was literally breathing her last breath. Yes, it happens that quickly. And, that’s another reason that we generally don’t like to have late season lambs.   I left the unpleasant job of disposal to the Boss and headed into town for an abbreviated feed-food trip.

I say abbreviated because we needed to hurry to get on our way. The priority job for Monday was a trip up to the processor’s to pick up the first batch of retail cuts for the season. This is always an eagerly anticipated trip since demand for many of the cuts far exceeds supply. We had customers waiting anxiously and meat sales promised to be brisk. In addition, we had just received a new selection of lamb recipes from the American Lamb Board.

We pay a small fee to the Lamb Board for each lamb that goes to the processor or through the stockyard. Payment of this fee entitles us to use the publications put out by the Lamb Board. This year the recipes have a global theme and utilize some interesting spices that aren’t real common in our Valley of the Shenandoah, so I’m rather excited. I like having these resources for our customers, but I really like trying new things for our table as well.

No sooner had we gotten on the interstate to head home home, we got caught in the middle of a torrential downpour. The words torrential and downpour are not used lightly. It was nearly impossible to see anything, despite the fact that the brand-new windshield wipers were flipping away on high speed. And, then as quickly as it started, it was over. We encountered no other delays and got the lamb safely stowed in the freezer ready for Market.

Back on the hill, it became obvious that the parasite problem had not been limited to the one small lamb. The other small lambs were looking a bit poorly. And, one of the bigger ones had serious case of bottlejaw. It was quite possible that we were going to lose a few more if we didn’t do something immediately. Time to de-worm the whole bunch! We have been concerned that this season was going to be bad since it has been so hot and humid. (it’s looking like we were right) Closer observation was going to be required.

While I think we’re finally beyond the crisis and it’s safe to say that the rest of the lambs indeed survive and thrive, it is only because we took charge of the situation and treated the problem. There are times when animals need to be medicated (just like humans) or they will die. To do anything less is actually inhumane treatment and bad husbandry. However, I know consumers are concerned. You can rest assured than any medications have cleared the animal before processing (processing facilities actually test for residues). So, ALL meat is indeed “anti-biotic free” when it is consumed. It aggravates me that this has become a “thing” despite the fact that few consumers truly understand the subject. However, I guess that little rant should be a post for another day.

In what proved to be one of the bigger challenges of the season, we finally managed to coordinate schedules and the weather in order to get the winter supply of hay.  The Boss and I headed out early and picked up the first wagonload. Then the  “best hay unloaders ever” worked incredibly quickly and the barn was filled to the rafters before lunchtime. The Boss, Josh, and Blondie are an awesome team.

Now, the sheep are set for winter. 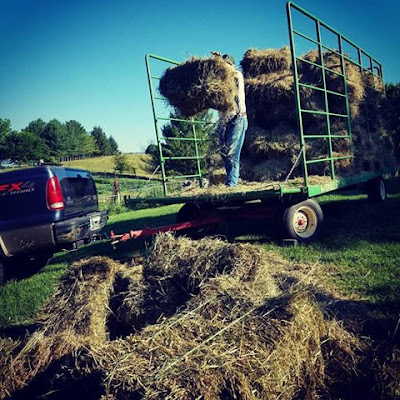 I just realized it was a good thing that MrB was here to keep us all headed in the right direction.

The rest of the week was taken up with more of the same old, same old…including more rain.

With eyes on Tropical Storm Cindy, we started making preparations for Saturday Market. Early in the week, it looked as if the Market would be a wash-out. This was a little concerning as downtown Staunton had flooding last week and all the rain led to a sink-hole out on the interstate.  To say that the ground is saturated is no understatement. But, thankfully, the storm skirted our area and the weather for the Market was gorgeous.

It was a great market morning. More than one customer commented that our vegetable stand was finally looking like they’ve come to expect. Sales were brisk and we finally hit that total that we’ve come to expect that has eluded us all season. It's been a long, hard struggle, but maybe we can finally put the rocky start to the season behind us. Here’s hopin’!

It seems fitting for the last post of June (which is Dairy month) to note that I looked out across the way and spotted a herd of Jersey cows grazing along the ridge. In an area where black beef critters far out-number any other breed (heck, there are even more Angus cows than there are people in our “neighborhood”!) something different is newsworthy. In case you don’t know, Jerseys are pretty, brown DAIRY cows.


While some of the neighbors speculate as to how the new owners of the farm down the road can possibly make a go of a start-up dairy operation in today’s somewhat tumultuous agricultural market, I was thinking other thoughts. The sight of those brown-eyed beauties left me sadly nostalgic and doing a lot of “over-existentializin’ “(I realize that is not even a word. I borrowed it from a Kenny Chesney song and believe me, it fits)

When we moved to the hill and the Boss got me my first Jersey cow, it was the realization of a lifelong dream. At the time, I thought I’d have my Jersey girls forever. You can read about my long love affair here.   Or here.

While the decision to sell that last cow, to leave home-dairying behind and move on to other things was ultimately mine (and it was indeed sensible, logical and the absolutely right thing to do), not a day goes by that I don’t miss those old girls and the way of life they represented. Honestly, I haven’t been able to look across the way all week without feeling a little sad.

My nostalgic over-thinking may have been precipitated by the fact that we are rapidly approaching our twentieth anniversary here on the hill. That’s a milestone that almost demands some sort of analysis and recognition. (which I’ll get to writing about soon)

Twenty years is a long time to do the same thing…and finding a way to keep the sense of enthusiasm and creativity to continue sometimes proves difficult.

Here’s to re-charging and refocusing and pressing onward.

Thanks for stopping by. Come “visit” again real soon!