Ordinarily, after shearing, the ewes go back out to pasture and don’t demand much attention (other than feed and water) until late July when we ready them for August breeding season.

But, last Sunday one ewe just wasn’t acting right. She didn’t come with the others. She hung back and stood alone. That might not sound like a problem, but if a prey animal doesn’t stay with the flock in the wild, it can be deadly. While it may not be quite so dire in the barnyard environment, it does indicate a problem.

Since she was stretching in the odd way that a ruminant does when it has a bellyache, we treated her for internal parasites after checking for any other issues. Parasitic overload can cause a whole host of problems. Then, a good dose of probiotics would get the good bugs in her gut working once more.

At that point, there wasn’t much more we could do, so we turned them all out and went on with our day, checking on her repeatedly. She didn’t seem to improve greatly, but she did stay with the flock, so we took that as some sort of progress. But, I must admit, her condition worried at the back of my mind. She’s a nice, young ewe that produced some beautiful lambs this season, and I would truly hate to lose her.

With the ailing ewe still in my thoughts, I was heading out to check the gates when I saw the ram flailing about, with something between his back feet.

Now, Angus seems to get bored this time of year, hanging out alone in his bachelor paddock at the back edge of the farm. His idea of entertainment is to butt the water tub around the field. Since climbing fence and retrieving it while he decides if he wants to butt a human doesn’t appeal to either of us as a fun time, we clipped a big stock tank to the fence. Now, he just butts that and splashes in the water. It’s not unusual to hear him banging into the waterer and talking to himself.

But, this time was different. He was stomping about, grumbling in his rammy voice and I could swear I saw something long and black flip up into the air. My first thought was a snake. It’s the time of year when we see a fair number of black snakes and there have been reports of copperheads as well. So... I took a slight detour, hoping that I wasn’t going to have to do any reptile removal.

He seemed particularly happy to see me as he ambled down the paddock, although he did seem a little disappointed that I didn’t bring treats. He also seemed a little startled when I laughed out loud at the “enemy” in the ram paddock. It was a piece of black soaker hose! It was apparently a piece from last year's winter squash planting. I have no idea how it got broken, how it got in his paddock or why he felt it necessary to do battle with it. But, at least I didn’t have to deal with any snakes! (and I left it there for his future amusement)

After a rainy day run to town, we were ready for our first lamb hauling trip of the season. This went amazingly well. So well that we had loaded the lambs, hauled the lambs, unloaded the lambs, given our instructions to the processor, and returned from our trip BEFORE lunchtime without a single incident! That’s one for the record books, for sure.

So, with that behind us and the sheep out of the barn for the summer, it was time to pull the garlic.

The wet weather has not been kind to the garlic crop and the Boss was afraid that if we left it in the ground any longer, we might lose it all.

Ordinarily, all irrigation is cut off to the garlic toward the end of its life cycle. As the bulbs swell, any added moisture will cause them to burst open. Not only do they look less attractive, the bulb is now susceptible to disease and rot. However, there is nothing we can do to stop precipitation from the sky and the ten inches of rain in May didn’t do the garlic a bit of good.

But, the wet conditions did make it easy to get them out of the ground!

The nice garlic bulbs are beautiful and it was great to have a little more on the produce stand for the Market. 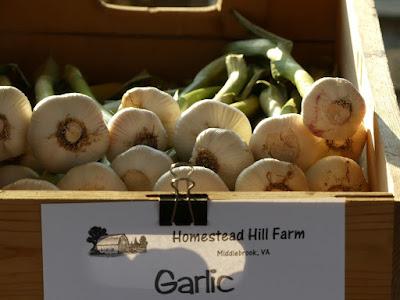 Then it was time to get the winter squash planted. As he hauled load after load of mulch hay, I worked on planting the rest of greens in the hoophouse. The squash planting went off without a hitch and now that he planted some corn seed, that garden is completed for a while. We will have to get some fencing put up very soon to protect it from critters. I saw an enormous rabbit out there and I feel certain that the groundhogs and deer have the area under surveillance.

Speaking of the deer surveillance, we covered the grape vine at the top of the lane with net in hopes of beating the marauding deer herd to the harvest this year. Last year, they ate every single grape just hours before I got out there to pick them! No exaggeration. At daybreak, the dogs were going off at something.  I looked and saw the deer on the lane and didn’t think any more of it. I went out after breakfast and found...nothing...
...except a few shriveled little raisin-like things.


Here’s hoping that the netting does the trick!

During all this other activity, we continued to worry over the ailing sheep. She didn’t make much improvement for a couple of days. We ran them in the barn again and gave her another round of probiotics. At this point, we also marked her back with a bright green crayon. That made it far easier to spot her when doing a field check.

Then she was observed eating grass...yay! When she started shoving her way into the feeder among the other ewes, we felt a great sense of relief.

By the end of the week, she had completely recovered. So much so that she was fighting with another ewe as to which one got to go first down the alley to the front field. They were rearing up in the air and smashing heads with loud thumps and muffled baas. While I have no idea what this was all about, I can only surmise that she lost her flock ranking while she wasn’t feeling well. However, she won the argument and all is now relatively peaceful (and healthy) with the flock once more.

The end of the week means that it was time for Market preparations once more. Unfortunately, it seems like we are still in standby mode on much of the produce. There are lots of teeny, tiny vegetables out there, but it will be a while before they are ready.

Two weeks…seriously…two weeks and we should have produce rolling in! However, it was a beautiful day for the Market and the folks were out in droves. 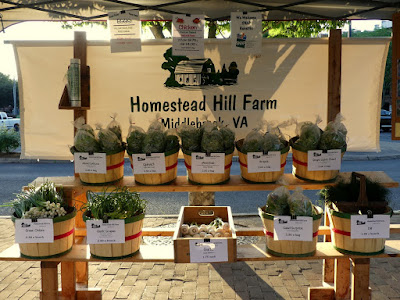 Now, it’s time to re-group and relax a little. The upcoming week promises to be rather toasty, they’re predicting the highest temperatures of the year, followed by…you guessed it…rain. (not what the hay guys were hoping to hear) It will be another broiler week here as we process, move and receive chickens, keeping the cycle going.

So, I hope you’re having a Happy Sunday!

Thanks for stopping by. Come back and “visit” us again real soon!

Here's the link to the Boss' shots from this week's Market. Click THIS.