Surely after two weeks, I can think of something to write about...
Well, one can always hope.

This week seemed better than last week. Or at least more interesting. Maybe I just had a better attitude. Whoever said “attitude is everything” was certainly on to something.

The heat continued for the better part of the week. It actually set records some places! Extreme heat this time of year is not good in a number of ways. We depend on that cycle of warming/cooling that is “normal” to keep things growing in a dependable way. It’s time for the crops to be winding down, the trees to lose their leaves and the grass to begin to go dormant. Weird fluctuations in the weather are sure to cause issues.

BLUE grass is one such issue. And, the weather is definitely to blame for that one. Now, I don’t mean bluegrass like in Kentucky. Or even bluegrass as in the Boss’ favored musical genre.  I mean grass that was actually BLUE. What the...what?

As you may recall, Angus is currently in full ram regalia, wearing his harness with the greatest of ovine panache. His blue crayon is the last in the series before he heads back to his ram paddock, having completed his one and only task on the hill. (siring next year’s lamb chops) The ewe lambs have definitely been marked and are a completely unmistakable shade of blue, so it looks like we can claim success there...


However, the ram is NOT supposed to be blue. Or marked in any way.

In the past, we have always had an option on the crayons of hot/cold/mild weather rating, with each type of crayon being a slightly different consistency. This year, the company changed things up slightly. They now sell just “all-weather” markers. I beg to differ. The warm weather made the blue marker more than a little, shall we say, melty?...and everything Angus touches is BLUE. Which explains the blue grass. And, he’s blue. The marked ewes are going to be BLUE forever. Big globs of it are on their wool, by the feeder, on my jeans, my boots. It’s everywhere. It would be funny if it wasn’t…so, well…blue…and seemingly indestructible.

I’m thinking a letter to the producer may be in order. I mean, it’s been hot. But, not so hot that everything should be covered in blue, melting ram crayon! (oh, for cooler weather)

Yes, folks, THIS is my glamorous life…obsessing over melting ram crayons.

With an eye to the future, (it has to get cool at some point) the Boss bush-hogged the fall potatoes. By mowing the tops of the potatoes, plant growth is effectively stopped and the potatoes start to develop a tougher outer skin. (this skin is what differentiates NEW potatoes from storage potatoes) The skin allows the potatoes to be handled without damage and stored for a much longer period of time. So, after allowing the potatoes to mature in the ground, (sometime in the next week or so) we will dig the fall potatoes to get them into the reefer before the very cold weather sets in. They, along with other stored farm products, will be available for Winter Sales.

We need to protect the crop from two potential disasters---extreme cold and constant light. Frozen raw potatoes are just gross and potatoes that are not protected from the light turn green as they attempt to photosynthesize. I must admit, the potatoes in the grocery always fool me into thinking they are LIMES. While you can still eat green-ish potatoes, you really should trim off all the green part. This green is concentrated areas of solanine, an alkaloid, which can cause digestive upset. Very high levels can cause more severe problems. This is naturally occurring in all potatoes in small amounts, but light causes it to build up. (and that's your science tip of the day)

We also decided to cut our losses with the Brussels sprouts and just let the hens eat that entire part of the lower garden. That decision may be worthy of its own post. But, for now, the hens are happy for new green stuff and the Boss and I are happy with one less frustration in our lives.

Then the Boss cleaned the hen yard. In reality, it’s more cleaning underneath the hen house. The wire mesh floor allows the chicken manure to fall to the ground below. Over time, this builds up and needs to be removed, since it’s dirty, smelly and provides a haven for rats.

Now, cleaning the hen yard is far more involved than you may think.

First, it has to be done under cover of darkness while the hens are still asleep and locked inside the henhouse, as the tractor and wandering hens could be more than a little disastrous. Then, the henhouse needs to be moved (in the dark) which never proves to be quite as “mobile” as one might assume.  (a quick explanation here...while our hens do indeed go outdoors to scratch and peck, they do get fresh green stuff on a regular basis, and they do eat garden scraps, they do NOT travel all over the farm doing these things...years of trial and error have taught us that control is the key to our success)

Since there is a great deal of chicken poop involved (the reason for cleaning) the dogs feel it their sworn duty to get right in the middle of everything and “help”. They also ate a few rats. (all the chicken feed and broken eggs attract rodents despite our best efforts...can’t poison the rats without risking the dogs) Like I said earlier...it’s all about the glamour around here.

With the mess cleaned from beneath the hen house (a big pile of chicken poop is “aging” in order to be used as fertilizer later) the hen house was moved into position, the big weeds trimmed, the fence re-positioned, just in time for the hens to come outside and have breakfast. And, the Boss headed inside for his own breakfast.

Then it was time for more hoophouse and garden clean-up for the Boss and I planted and picked. 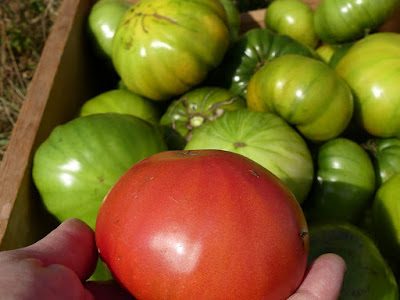 I keep thinking that surely I have picked the final tomato particularly since we have had at least three frosts. But, I found a few more this week. There was a whole flat of green tomatoes to take to Market. We sold a few and we will allow the rest to ripen for our own use. While these won’t taste as good as vine-ripened fruits, at least we can extend the season ever so slightly before swearing off tomatoes until next summer. Frozen and canned tomatoes are good, but there is nothing like summer tomatoes!

Friday started out as a lovely fall harvest day, even though it was still rather warm.

While I was in the hoophouse I sensed it was getting darker and darker. I looked up to see the black skies give way to torrential rain as a storm raced up the ridge. Apparently, that was the leading edge of a cold front, because once the rains passed through, you could notice a distinct chill in the air.

Friday afternoon/evening was one long display of gorgeous October splendor. There is nothing quite like the play of light and shadows that we see as the weather makes that final shift to autumn after a few days of Indian Summer.  Click here for a post of photos from 2014.Unfortunately, the combination of wind and rain brought down a great number of the changing leaves, so things aren’t quite at pretty as they might have been. 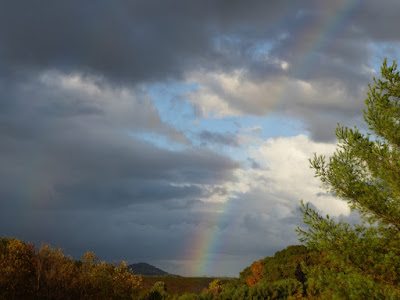 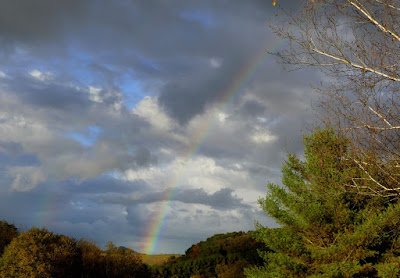 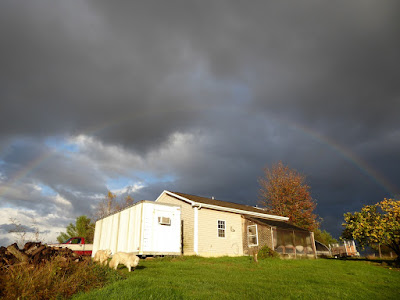 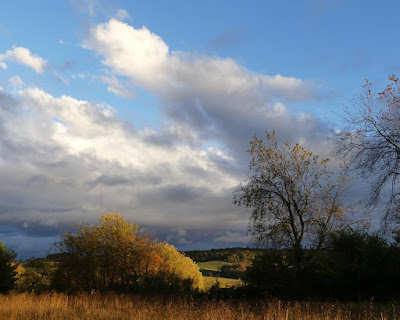 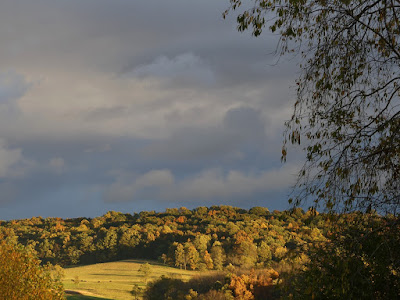 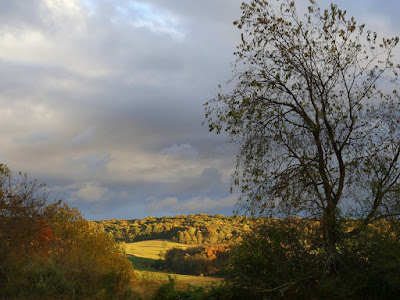 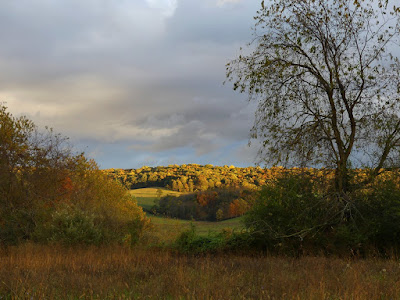 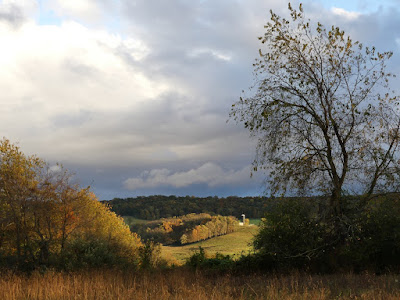 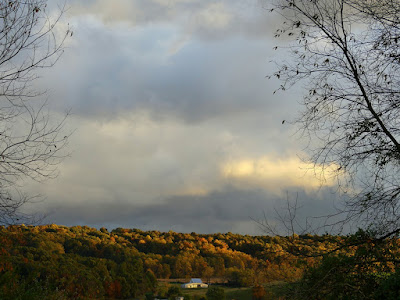 And, when we said we wanted cooler weather, we should have been slightly more specific. We definitely got COOLER! After a string of near 80 degree days, temperatures in the fifties (with gusty winds) felt downright cold.

The cold and the wind slowed foot traffic at the Market considerably, making for a very long morning.

Fall at the Market is far different than the height of the season. But, it gives us time for more lively and in-depth conversations. The customer base is wide and varied and the subjects covered are diverse to say the least. Personally, the social aspect of the Market is every bit as vital to our success as the economic benefits. And, it’s fun, too.

With the Market behind us, it’s time for to re-group and plan another week.

Thanks for stopping by. Come back and “visit” again soon!
Posted by Barbara at 7:26 AM