While I honestly can’t believe another week has slipped by…I really need to come up with something a little more original for our little Sunday farm tour.  Unfortunately, that’s not happening today. Original thought and true inspiration are illusive commodities these days. (sorry ‘bout that)

I’m up earlier than usual in hopes of getting my weekly report finished before daylight so I can then get back to the job at hand.  Today we are having a baby shower in honor of Blondie and Grandbaby #2 and I still haven’t wrapped the presents! (among other things) YIKES

It is finally, finally starting to feel like the growing season has arrived.  I’m not alone in my observations of weird weather, crop failures and a general feeling of malaise. But, this week something shifted and I’m hoping that it is a sign of a new trend.


While I was on the town run, the Boss dug the garlic crop. If you remember, this is the crop we very nearly gave up on.  For months, that garlic sat in the ground and didn’t look like anything was ever going to grow. We were going to till and plant something else. We really thought about giving up on garlic all together. But, then it sprouted…and then it grew…and it looks like we’re staying in garlic growing for a while longer.

The scapes alone were astounding. 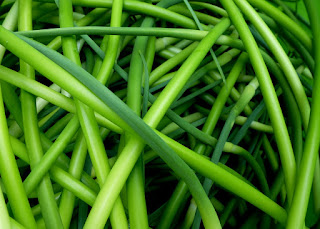 Each one was almost as big as my pinky finger and about a foot long. Garlic scapes are beginning to garner the recognition and popularity they so richly deserve. Yesterday at Market, our biggest garlic scape addict customer/promoter finally came up with a great description of scapes.  He says they are like a slightly garlic flavored young asparagus spear (no tip).  He’s right. And, they’re delicious.  We sold a lot, froze some for winter use and sales, made some scape pesto and even tried our hand at garlic scape-salt. (haven’t finished that project, but it looks promising). You can read  THIS for more on scapes.

After the bulbs were dug and allowed to dry in the field for a while, we transported them to the barn where they will sit on racks to cure.  This mellows out the flavor a little and dries the bulbs for storage. The Boss “cheated” and took some to Market because it was just too pretty not to share.

While deer are beautiful, they are a true nuisance to gardeners and to farmers. So, if these two know what's good for them, they will stay down by the creek.

Then, it was time to check on the potato crop.  I must say, I had some serious misgivings about this crop, too. (maybe I’m just having some sort of faith issue…) The plants were enormous and often a lot of top growth on a root crop indicates that the energy has gone into the plant instead of what is below the surface.  However, that was NOT the case this time.  The potatoes are beautiful…and there are LOTS of them.

Speaking of potatoes, we will be planting the fall crop in just about a week, so he tilled under the weed patch that was once the brassicas in preparation.  Here’s hoping the potatoes do better than the early broccoli, cauliflower and cabbage did! (what a disappointment) Not only does the garden look better, I think my attitude improved with the visual reminder of failure removed.

I spent some quality time tying up the tomato plants to the trellises. Honestly, I don’t like this job much.  It seems like it has to be done on the hottest, humid-est day causing the sticky yellow plant resin to mix with sweat and dirt and turn my hands black and I smell like a giant tomato. (which was an improvement from what I smelled like a couple of times during the week, so maybe I shouldn’t complain) By trellising and tying the tomatoes, we protect the plants from wind damage and the precious fruits rotting by coming in contact with the ground.  With this year’s trend to horrendous downpours, this job is imperative.  We will have to do it a couple more times throughout the growing season. …and we’re still waiting for that first tomato.

The zucchini and summer squash harvest has begun in earnest. For the next couple months, I will be checking on those every day in hopes of keeping ahead of the submarine sized squash that seem to appear all too quickly.  Those enormous fruits give zucchini in particular a bad rap. When picked small, they are actually quite tasty and delicious. (but, the big ones make some fine bread, cake and oven fries)

With the weekend rapidly approaching, the weather forecast became an issue. (when is it not?) The rain chances were 100%, which was more than a little disheartening. We have a 5-hour window, in an open-air market to make our living. Saturday morning rain is NOT our friend. But, it is what it is.  Those vegetables must be picked…

Early Saturday morning (about 1am) I was awakened by the sound of rain.  Not gentle raindrops on the rooftop.  Not at all.  It sounded as if the entire house had been suddenly thrust into a high-pressured car wash with the water turned on full-blast.  I have never heard anything like it! (It must have been one small cell that went through the area. A number of other folks heard it and had similar descriptions) It dropped over a half an inch in less than 5 minutes.  It was still pouring when we started loading for Market. And, while feeding chores in the dark aren’t a whole lot of fun, pouring rain makes them just plain miserable.

The rain was supposed to be around for the entire day, so our expectations for the Market were fairly slim. But, again…it is what it is.

And, amazingly…it was GREAT! We sold LOTS of meat…all the veggies (except just a few potatoes and some green beans that Blondie was coveting anyway) and actually had our best day all season. Go figure! Thank you, Jesus.  Thank you, customers.

Today, the wind is blowing. That’s almost always the way after a big rain event. (we ended up with over two inches---some localities reported over 4!) I don’t like listening to the wind howl all day, and it’s nearly impossible to work outdoors when it’s blowing this hard (gusts up over 30mph) So, I’m glad to be heading out to the baby shower.

And, I guess this is where I’ll close for this week…

Thanks for stopping by!  Come back and see us again real soon.