Wow! Summer arrived in full-force this week. I know the calendar says we have a few more days of spring, but the heat and the workload say otherwise.

There is no denying that the past seven days qualify as “productive”. With a great deal of effort, we managed to get caught up after the week of rain. Just one thing remains undone on the lengthy “to-do” list I made last Sunday. (and I knew I was being overly optimistic) I would say that we “worked like dogs”, but I’m here to tell you that Gus didn’t lift a paw to do anything productive.

That meant a week of planting, mulching, fertilizing, weeding, seeding, and harvesting.  There was even a little lamb wrestling thrown in there for good measure. Believe me, there’s nothing like a day of summer farm work to make you appreciate hot water for a shower and clean clothes!

We planted hundreds (and hundreds) of transplants in the gardens. I stopped counting when we reached 500 in the garden. (there were more in the hoophouses)  The brussels sprouts and winter squash have been tucked into their respective homes.  The succession plantings of broccoli, cucumbers and summer squash are adapting to the upper garden.  We’re just beginning to harvest the first planting.  Nothing like the first squash of summer. …and the beans are blooming!

With all the transplants out of the greenhouse, it was time to start more for the fall planting.  It took me two afternoons, but now both greenhouses are filled to capacity once more and in a few weeks we’ll have another huge “plant-a-thon” day. (probably DAYS…this time there are THOUSANDS of seedlings) By the end of the week, there was a lot of germination going on. That’s always exciting.

That’s good for crops like tomatoes and peppers, but spells the end for asparagus and strawberries.

It also means the sheep are looking for some relief from the heat.  With plenty of trees in each paddock, you wouldn’t think they would hang out behind the barn in the bright sunshine and dust.  But, sheep logic dictates that on days when the temperature is 85 and the humidity is over 50%, at least one ewe will attempt to find shelter under the feeder. If nothing else, it does provide a little comic relief for the humans.
Later, we gave them run of the shady alley next to the hoophouses where the grass is thick and lush…but, they found it incredibly startling that I was actually in the hoophouse and spent more time running in panic than actually eating.  Sheep!

After a long haul of repeatedly checking lambs, treating them and spending hours worrying over them, I think it’s safe to say that they’re all looking quite healthy.  We have had a real problem with parasites this year, as have a number of other producers, mostly due to the weather. Internal parasites cause all sorts of health issues and will kill lambs without diligent care on the part of the shepherd.  It’s always a good feeling to know that we’ve overcome the problem.

I know I’m beginning to sound like I’m stuck on repeat…but, this year has been a real challenge in a number of ways.

Which brings me to the brassica crop.  Ugh. The Boss finally decided it was time to cut our losses and put an end to the eyesore.  We salvaged what we could and then he bush-hogged and mowed, bringing some semblance of neatness to the garden once more.  In a couple weeks, we will be planting the fall potatoes in that space.  While the crop was not a total failure, it was a great disappointment and we certainly didn’t make any money on it. Bummer.

But, there’s always next year…(that’s become our mantra lately)

Wednesday’s sunrise was one of those things that made us stop and stare. 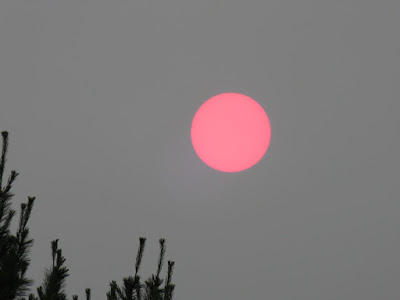 It was a hot, still, cloudless day and the sun was a perfectly round, glowing red orb.  Honestly, neither one of us could remember seeing anything quite like it. It was just a little creepy.  The weird skies even made the news.  Oddly, it was due to smoke from wildfires…in Canada!  The smoke was being carried aloft by the Jetstream and affected our weather for days.You can read more about it here. That was one for the books.

In another of those “one for the books” kind of things…there are millions (and yes, I do mean MILLIONS) of mulberries this year. Talk about delicious! 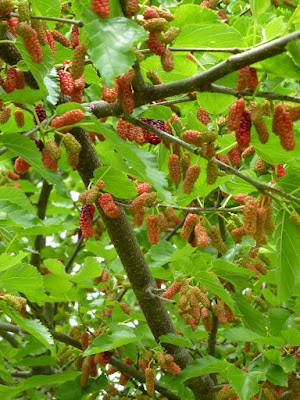 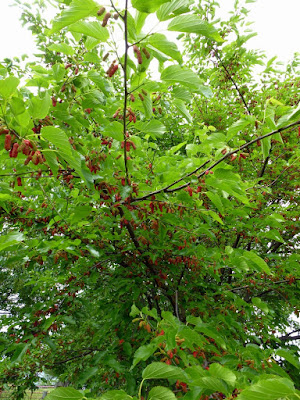 There are enough for the birds, the squirrels (the lambs even ate some) and the humans this year. I’m pretty sure the wandering, marauding deer herd has eaten more than a few as well.  Our original intent when we planted the trees years ago was to have another fruit for sale. This was the first year they have produced well enough to even consider this.  However, they are incredibly fragile and I’m pretty sure we couldn’t get them to the Market in good shape. We ended up with purple fingers and a fairly mangled mess when we picked them earlier in the week. I reckon that's why I have never seen them fresh in the grocery.  So sorry, customers! 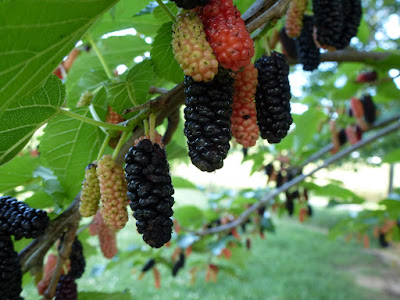 But, we did have other stuff for Saturday’s Market. 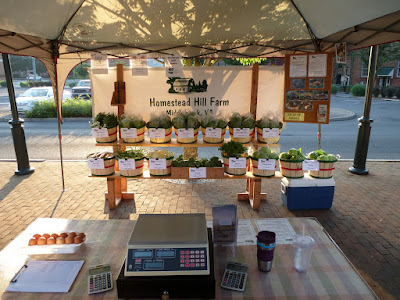 Except lamb. That was frustrating. The processor had a conflict and had to do some re-scheduling.  Demand for our product is at an all-time high. So, we ran out. And, I mean OUT. I think there might be a few pounds of ground left.  But, no chops, roasts, steaks, sausage…you get the picture. We lost a lot of Market sales.  But, in the good news department, it’s all ready now and we’ll be making a little roadtrip tomorrow. (after we process broilers)

So, I guess it’s time to bring this to a close…

Thanks for stopping by.  Come “visit” us again real soon!
Posted by Barbara at 8:49 AM