Gathered 'Round the Table

“But WHERE is the turkey?”

Our Thanksgiving dinner guest was more than a little baffled by the menu.


Five Thanksgivings ago, T-bone was having supper with us for the first time ever.  The lack of the huge holiday bird bothered him.  It seemed to bother him a lot. 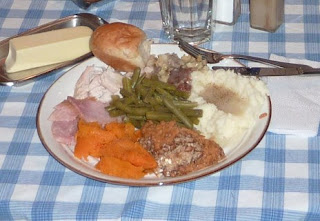 Our holiday meal generally centers on chicken, not turkey. Honestly, we just like chicken better. We also raise chickens. (Since our family has increased incrementally in the past couple of years, we added ham...in part because the boys love it so.)  Most of the items that grace the holiday table are very  traditional and have been grown here on the hill. The vast majority of the feast is made from scratch. There is always plenty of food. While he is one of the most traditional guys I have ever met, it wasn’t tradition (or the lack thereof) that bothered him. It was the whole TURKEY thing. Didn’t we like turkey farmers?  Didn’t we want to support them?

You see, T-bone (who is now SiL #2) grew up on a turkey farm.  A big turkey farm.  His dad and granddad have been raising turkeys for years and years and his dad is involved with the Virginia Poultry Growers Cooperative.  When Pilgrims Pride decided to close the Hinton plant in 2004, 170 LOCAL farms were affected.  The VPGC kept a lot of farms in business, saved even more jobs and helped the LOCAL economy tremendously.  "Dad" is a careful, concerned farmer who genuinely cares for all his animals. **For the record, many of the things you have heard about large-scale poultry production are completely un-true.**

I inwardly cringed knowing that word of the “turkey-less” Thanksgiving would make it back to the turkey farm.  We generally tip-toe when it comes to farm practice conversations, hoping not to offend anyone else. As a small farm direct-marketing to the public, it is often assumed that we must be  die-hard organic farmers and are probably“anti-Big AG”. It seems that small farms and large operations are notoriously at odds with the practices of one another. This is not so in our case…we know we NEED our neighbors who have big operations…and we admire and appreciate them, regardless of farming practices.


I was a little surprised at the reaction.  “Well, that’s great that they were eating what they raised themselves….doesn’t have to be turkey!”  A gracious response by any standard. He didn’t feel it necessary to prove that his model was better, nor did he even question our way of doing things here on the hill.

Gracious responses are sorely lacking these days, I’m sad to say.  It appears that a whole lot of folks feel the need to prove that they are absolutely RIGHT and everyone else is absolutely WRONG. There is a lot of discussion and dissension concerning food and food production models right now.  Much of the information bandied about is just plain wrong and serves only to make for bad feelings among producers and a lot of confusion for consumers. I must admit, all the mean-spirited  rhetoric is more than a little disheartening at times.

As we gather around the table in what should be THANKFULNESS on THANKSgiving, it would be nice if we left all the arguments behind.  It really doesn’t matter if your turkey is a free-range, organic, heirloom breed that you had delivered for $10 a pound or if you got it for 59cents a pound at Wal-mart…or if you are vegan and chose to serve tofurkey….or if you eat pizza and hotdogs. Your food choices don’t need to be some reflection of your righteousness standing in stark contrast to those who aren’t as eco-conscious, green or sustainable or whatever else you may claim to be.  No matter what graces your table, how it was grown, or even who prepared it….you should be thankful for it….and all the farmers along the way that made it possible.


If you actually have a meal to eat…that is a big reason for THANKSGIVING.  If you have friends and family…a place to gather…the list can go on and on….you (and I) have many reasons for which to give thanks. 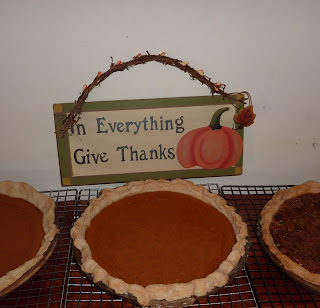 So for this Thanksgiving...let’s put the food fight away until another time.

…and please pass the second helpings!
Posted by Barbara at 7:06 PM