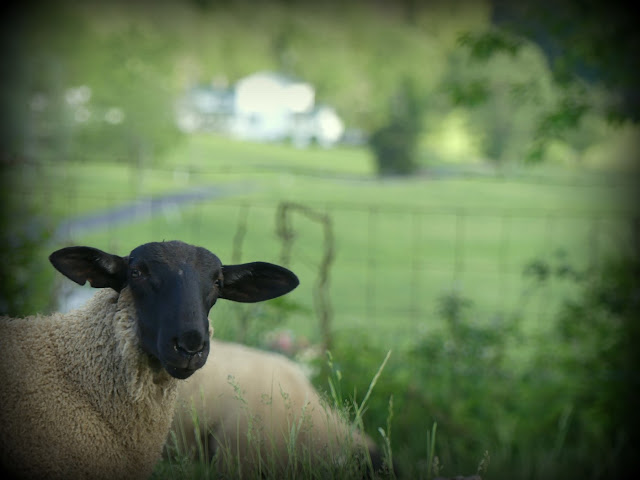 Mama thought that maybe I should take y’all on this week’s little "farm-tour" since I am the newest acquisition and I have come to rule the farm. (wait a minute, maybe she didn’t say RULE…but, I am sure she said I was important!)

I reckon an introduction is in order. They are calling me OTIS and I am the new ram. I’m part of the lamb crop of 2019 from Meadowcroft farm, along with 75 or so others. I joined the farm team here on the hill in early May, having spent the entire earlier part of my life on my birth farm not too far away.  My job is going to be simple. I will breed the ewes and our offspring will become the lambchop crop of 2020 and beyond. Pretty sure I can figure that out with very little difficulty! Instincts, you know. Other than that, I will just graze and look good.

When I first arrived on the hill, I had to stay in the barn for four days. FOUR DAYS. The Boss and Mama called it “acclimation”. I thought it was awful. I may have yelled a lot. And, I may have attempted to escape. But, it worked. I now know this is home. I will say one thing about those days in the barn. I figured out why Mama is called “the food lady”. She put a lot of effort into making me feel at home and cared for. She made two or three trips to the barn every day, bringing me treats to eat and pulling up massive bouquets of mixed grass, clover and dandelions to eat. She sets a pretty fine spread. She also petted my nose and told me I was handsome. I could seriously get used to this.

But, then came the blessed day that they let me out with the other sheep. Wow! There are some good-looking girls in there. I was a little disappointed that not one of them found me impressive. Not one! A couple older ewes took one look at me and decided to beat me up. I don’t think they were being…what’s it called?...bullies. No. They just didn’t want to be bothered. And, they might have been afraid I was in competition for that good grass they were enjoying. I must say, that was some good stuff! The grass, that is. And, the ewes…well, they weren’t bad, either.

However, all good things come to an end, and the Boss and Mama said that the lambs couldn’t stay with the ewes anymore. Something about getting their condition back. I don’t know what they were talking about…those girls look good to me!

The entire flock was run into the barn. The lambs (me, included) were all given some gross-tasting stuff and sent out back. I didn’t want anything in my mouth, but Mama said that it would keep me from getting internal parasites that would make me sick and I might die. Since that sounded worse than the stuff tasted, I took it without too much complaint. Plus, by this point, I’m pretty sure Mama wouldn’t do anything that would hurt me.

It’s not so bad out back, although I really wish we could be with those pretty ewes. The other lambs were not so happy. They hollered and complained and wouldn’t even attempt to eat the grass. And, it was nice grass, too. All the rain and warm weather means that the grass has grown tall and lush and in some places it’s up to our shoulders. But, those other lambs… Mama says they’re being weaned and they’ll eventually stop yelling and graze. I remember being weaned. It isn’t pleasant to leave the routine of being a tiny lamb and having your mom around, so you can get a little snack whenever you want. But, that’s part of growing up, so these other guys really need to pull themselves together and get with the program.

Mama says they’re “dumber than a box of rocks” (I’m not real sure what that means…but, it can’t be good) She rolls her eyes whenever they don’t do what she wants them to. (which is most of the time) They certainly don’t understand Mama like I do. I think she just wants me to love her, so I follow her everywhere. (maybe a little too closely, ‘cause she seems to have some sort of boundary issues, and she’s always looking over her shoulder and telling me not to walk right behind her) But, the fact that she generally has a feed bucket with her makes her so attractive. The others still don’t get it. They flip out and run around and generally go the very opposite direction that she wanted. That makes her say some words that I don’t think are very complimentary. When she gets the crook out, swings it and whistles, it means GO. She will show us where. And, I think I figured out that when she cusses, we all did it wrong. (again) but, we’re lambs…she might be fighting a losing battle when it comes to our education.

Well, that’s about all I got. It’s not a bad place to live. But, I don’t see much happening from my spot out back with the lamb flock.  And, I do wonder where those pretty ewe-girls got off to…?

Perhaps Otis was not the one to facilitate this “farm tour” after all! He seems to have a one-track mind.

We’ve reached the end of May here on the hill. Two months in on Market season and we’re getting back in the rhythm of planting, harvesting, processing and preparation.

Here are the requisite sky-shots...


The cold, mucky weather has been replaced by hot, windy conditions. But, I hesitate to complain since the hay-guys across the county are trying to get their crop cut, baled and stored for winter. (we got a nice shower last night, so at least we don’t have to do any irrigation today)

The broccoli and potatoes in the middle garden are growing well and the green beans germinated well. We’ve gotten the first planting of squash and cucumbers in the ground and seeded some more. We hope to get the tomatoes in the ground this week before all the plants form fruits while sitting in the big trailer. The Boss had an inspiration for a new project that involved some demolition, a couple trips to Lowe’s, and a load of mushroom compost. (more on that later)


We got a load of firewood, a couple batches of chicks, we’ve processed broilers, finished the green garlic crop, started lots of seeds and already completed eight weeks of Market. Check out the Boss' Market photos HERE. Or "like" the Market...Staunton Farmers' Market to keep up with what's happening.


The busy time has arrived once more!

But in the midst of the busy-ness, it is important to look around…to appreciate this life we’re living…not just get stuck in the monotony of the endless work. To that end, I carry my camera and try to document these daily occurrences and the moments of wonder, so they don’t get forgotten. While I realize that seriously hampers my productivity, it encourages me to maintain grateful heart. And, often gives me some cool stuff to share.

Here are a few of the things I noticed here on the hill:


Come back and “visit” again soon!