If there is any truth to “April showers bring May flowers…”

I may be wishing I was a flower farmer come next month.

We have had some sort of rain every day this week. Not that I am complaining (it has been very dry and we really need the moisture) …however, the timing of said precipitation caused a whole lot more juggling of the work schedule and some serious sogginess for Saturday’s Market.

This time of year, any sort of moisture makes the grass grow. Which is a great thing in the pastures and hayfields. In the gardens and the front yard…not so much. So, while I realized it was Sunday…and EASTER Sunday no less, I spent the day mowing and mowing and mowing. Because, you guessed it. It was supposed to rain.

While I am still not a fan of lawnmowers, and mowing is one job I will be more than happy for the Boss to resume, at least you don’t need a machete to hack your way through the grass around here. Well, for the time being, more rain means more grass growth which means…good grief…I need to mow…AGAIN! (thankfully it’s raining-again-so no lawn mowing today)

Since we use the sheep to harvest most of the grass, it was imperative to get them up on “raspberry hill”. This is a section where we use temporary fencing, so a little early morning set-up was required. I guess I should also explain that “raspberry hill” used to be the home of our bramble patch. And, although it hasn’t seen a raspberry in many a year, the name remains and we both know exactly where we are talking about. So I guess we’ll keep calling it that (and explaining it every once in a while).

Some of the older ewes knew precisely what I was doing when I headed out with the roll of electro-net. They stood at the fence and made comments the entire time. I’m not sure if they were trying to encourage me, or telling me to hurry. Then, the Boss arrived on the scene to give a few pointers. While I hope it doesn’t sound like I’m complaining (after saying that the lack of teamwork was lonely last week) but, it’s kind of being back in driving school all over again.  …“a little more to the left”, “give it some gas”, “not right there”…I know it’s a sign he’s feeling better, so I’m trying to be understanding.

With the fence up, it was just a matter of opening the gate and letting the flock head to the promised land of lush and lovely grass. Right? Well…most of the flock got the memo. The ewes knew exactly what that opened gate meant. However, a good number of the lambs ran right by the opened gate and all the way to the barn. Then, they stood at the barn and hollered because they couldn’t figure out why there wasn’t any food, and where their mothers were. Finally, they got with the program and everyone was grazing in the right place. That beautiful grass is now but a memory and they’ve been moved on to greener pastures. 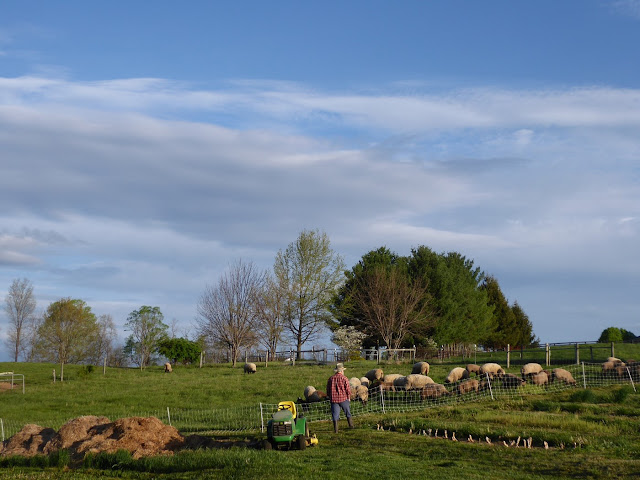 Then, we processed the first batch of broilers on Tuesday. Since, the Boss still can’t lift anything, the girls came home to help the old folks with that farm chore. I had all the broilers captured and crated by the time they got here and they helped put the crates on the tractor hauler and we got the job underway. We hadn’t processed broilers together as a family in nearly 10 years, but they were quite gracious in their handling of the Boss’ constant supervision and we got the job done in record time.
With that job completed, it was time to move the second batch of broilers so we could be ready for the third batch of broilers…

To keep a constant supply of chicken, we have the entire process somewhat choreographed, following the same steps month after month, year after year. Here, read this post from 2012. http://homesteadhillfarm.blogspot.com/2012/08/the-week-of-broiler.html (things are pretty much still the same)

But, while I was working on readying the outside broiler pen, my phone rang.

You guessed it. The post office was calling to report that the chicks were at the Staunton office ready for my arrival. He could send them to Mbrk, but he had no idea when they would arrive.  But, if I wanted to come get them myself, they would hold them. So…off I went.

Can I just say here that cell phones are great…? I would have missed that call for hours if the postal employee had called the house. But, I think I need a special noise filter. It’s really hard to hear over the odd and random farm sounds. It’s kind of like "old MacDonald’s" around here (with a cluck-cluck here and a baa-baa there) This time the sheep were complaining insistently in the background. And, almost every time the doctor’s office calls to check on the Boss in the afternoons…I have been in the henhouse gathering eggs. And, if you think sheep are loud…you should hear those hens! (I wonder what the person on the other end hears…and more importantly what they think!)

After my little excursion to town, I got back to the business of moving the broilers. (in the rain)  And, the brooder needed cleaning before the babies could move in. So, they spent the night in the chickie-pool in the shop. 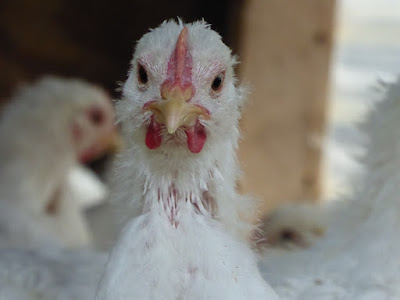 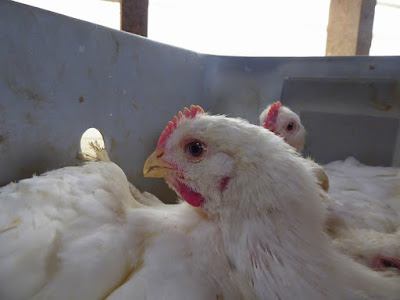 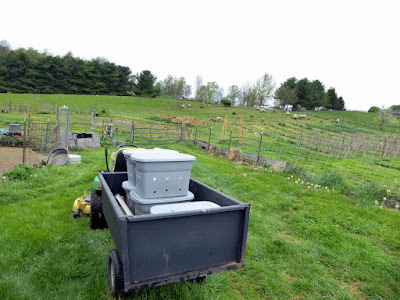 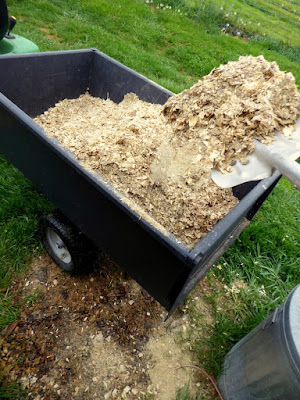 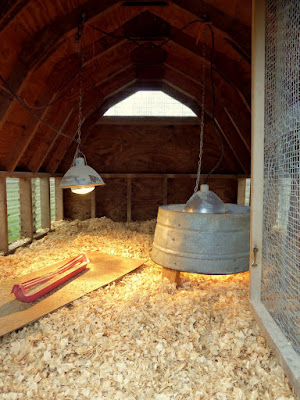 Eventually, we got all the broilers situated. Batch #1 is in the freezer. (I will leave that to your imagination) Batch #2 is in the field.
Batch #3 is tucked in the brooder.

It’s just a matter of maintenance for the next couple weeks until we do it all again. Life IS a dance. 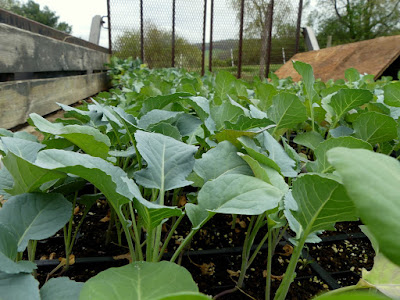 Since we’re still trying to keep things somewhat on schedule, I moved all the brassicas out into the big trailer in the backyard so they can “harden off”. This just means that they are exposed to the elements (in a somewhat controlled environment), allowing them to develop strong stems before they are planted in the garden.

But,their garden home hadn’t gotten any sort of preparation, so Tbone was going to take care of tilling over the weekend. …but…once again, the weather… 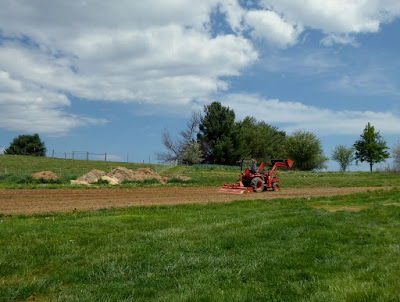 The Boss put in a call to our great neighbor, who apparently dropped everything, and came over and tilled the middle garden for us in short order. Thanks, Dale!

With the garden tilled and the plants readied, you can guess what’s on the agenda for the upcoming week. That is…if it stops raining.

In hopes of finally getting the hoophouses under control,  the Boss got me checked out on the new electric tiller we bought specifically for hoophouse work. Not only is it a little more “green” (literally and figuratively) we won’t have gas fumes to contend with in the somewhat close environment of the hoophouse. And, it starts SO much easier than the old one. Now, maybe I can get something planted in the hoophouse! (I’ve been trying, customers…I have been trying!) The rain won’t hinder my working in the hoophouses, I just need to find some TIME.

On one of the only dry afternoons during the week, I did find the time to weed the garlic. It won’t be too long before the scapes are ready to harvest (that means the bulbs won’t be too far behind). As the bulbs grow, it is imperative that they have good air circulation to keep them healthy. So, a good weeding was in order…and the hens enjoyed the green stuff.

I was surprised to find great numbers of ladybugs in various stages of development. I like ladybugs, they’re so bright and cheery-looking. Plus, they eat aphids…so, go ladybugs!  Yay, one more job was crossed off the “to-do” list! (and, I didn’t get wet)

Sadly, I can’t say the same thing about the Market…

Rain at the Market is never a good thing. So, a downpour at 6am certainly seemed some sort of bad omen.

But, despite the deluge…the day went much better than either of us expected. Although, it felt incredibly good to get home and put on warm, dry clothes!

Our week ended with a double birthday supper for Blondie and Tbone since they share a birthday month. I think everyone had a good time. It’s always enjoyable to have the whole gang here for a while.

Thanks for stopping by…. hope you’ll “visit” us again real soon.