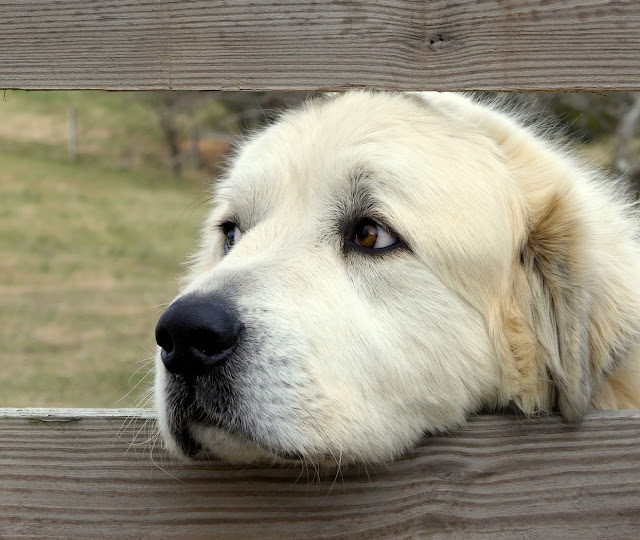 I don’t even know where to begin...

I have always found February to be a brutal month. It’s cold and dark and hard in so many ways. My personal experience has been more often heartbreaking and horrible than the hearts and flowers most expect. (I’ll spare you my stories from the past…)

This February is proving no exception.

The week began with the kind of news that took my breath away. After I wrote about the loss of a neighbor several years ago,(read this one) I never imagined we ever would find ourselves reeling from a similar tragedy. But, Sunday afternoon brought the news that another of the best and brightest had indeed left us. This time it was the one who had been among the first responders credited with saving my eldest daughter’s life, the one who climbed in that wreck and gave the critical first aid as well as the vital comfort that enabled B to endure the hour-long extrication and overcome the very slim odds that she would even survive the flight over the mountain to the trauma center. She saved us from facing the kind of tragedy that parents can only hope remains horribly unimaginable. My family would not be what it is today without her actions that awful night back in April '10.

I have always felt I owed Sherri a great deal for what she did for our family that night. But when we talked about it, she put off the thought, saying simply, “I could imagine my own daughter in that situation. I just treated yours like I would have wanted someone to treat mine.”

A special bond formed that night between rescuer and patient, and she and B went on to become great friends. When lights and sirens got in B’s blood, Sherri was there to mentor her and encourage her in her efforts to “give back” to the agency that eventually became her extended family. The close-knit group granted much-needed closure to the traumatic situation as well camaraderie and a sense of community.

And, now my eldest daughter’s hero and friend is gone. I’m not sure how I can help my daughter work through her grief as my own memories and issues from that awful night are all jumbled up in the terrible sense of loss.

This loss will be felt keenly by a lot of folks for a very long time.


It always surprises me that despite the tragedies, life indeed goes on. While the memories and the sadness overwhelm momentarily, other responsibilities demand our time and attention.

The routine tasks of farm life certainly don’t stop because we’re sad or worried or bothered about something.

The animals needed to eat, so I headed to town for the feed run. While there, I met up with Blondie and my #2minion for lunch. And, I admit, part of me wondered at myself for being able to giggle with my grandson in the face of such a needless, tragic loss.

Mid-winter hay hauling is just another inescapable reality of February. There’s not enough room in our barn to store all the hay the ravenous sheep will eat. (for that matter, there may not be enough hay...anywhere) The hay guy holds back a wagonload for us in his barn. It’s just a matter of picking up the hay wagon, unloading and writing a hefty check. With a nod to our aging bodies, we’ve begun to beg a little help for this job. THANK YOU to J & B for helping the old folks out!  We can hope that this will last through what’s left of the “winter”.


I put winter in quotes because with the exception of a few bitterly cold days and a dusting of snow, we really haven’t had a winter this year. And, the forecasters aren’t calling for much more. As a matter of fact, they are saying that next week may be our last shot at any measurable precipitation. Honestly, that can’t be good...and I’m just waiting for the worrying comments to begin to dominate the conversations with our fellow farmers…

However, if you look in the right places, there were lots of positive things in this week tinged by tragedy.

The first ewe lamb dropped her own ewe lamb...with no troubles whatsoever (I missed the event entirely, it was so quick and trouble-free)...and she’s an exemplary mother.

The pullets began to lay eggs. (now to convince them to lay IN the nestboxes)

The Boss got the hoophouses whipped into shape for the growing season. We can enjoy “weed-free” for a while. 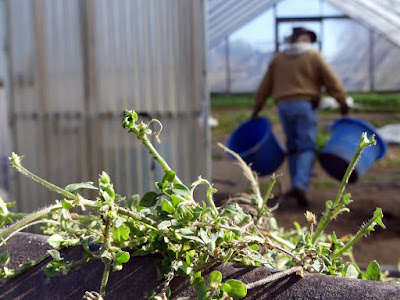 Germination rates were great on the early brassicas, so it was time to thin the seedlings. While it seems somewhat counterproductive to pull out some of those healthy little seedlings, it is truly necessary. 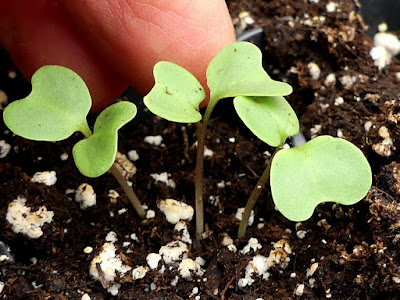 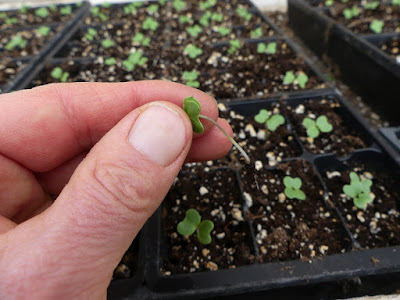 By leaving just one healthy seedling in each growing cell, we assure a hearty transplant for the garden. Multiple plants in the cell compete for nutrients and never produce as well as a single.

Then, there were seeds to start for hoophouse growing. I find working in the greenhouse is truly therapeutic. ...the warmth, the smell of the damp soil, the promise of new life...it’s easy to put all the negative stuff aside.  ...and “dirt therapy” is really a thing. I kid you not! There are those who ascribe to the thought that the bacteria in the soil actually helps to elevate mood and overcome anxiety.
Check this out.

I’m thinking it’s a real good thing that growing season demands I spend so much time digging in the dirt!

…and that was the week on the hill.

Thanks for stopping by. come “visit” us again soon.

P.S. Hug your dear ones a little tighter…and if you’re hurting, please, PLEASE talk to someone.