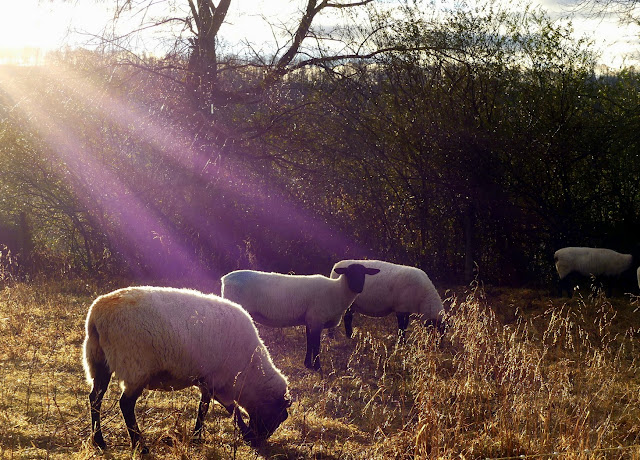 This week doesn’t have an impressive list of accomplishments, actually there’s very little to show for our efforts, and the place still smells like skunk, but, we did it. We got through another week!

…and sometimes that is a major accomplishment.

It’s been one of those weeks where nothing went according to plan. And, I do mean nothing. I don’t think we got one farm-related task accomplished. No, wait. The Boss did get the part to repair the snowblower. (seriously, we are talking zero accomplishments)

The Boss always calls it STC when all plans go awry ...and just chuckles as he says “Subject to change, baby, it’s all subject to change!” he also reminds me that it happens all the time and I should be used to it. As a matter of fact it has happened so many times over the years that it could be said to be the story of our life. Which, it is, sort of. That is the working title of the memoir I keep saying I’m writing…

However, that is not the subject of this post.

I really should have known that things were going to take a turn for the unpredictable when the week started like this:

“Hey, do you think it smells weird out here?”

I pulled my head out of the feed can where I was attempting to capture the last few kernels of grain for the sheep’s breakfast and took a big ol’ whiff of good, country air.

Now, cold, brisk mornings around here smell wonderful (usually), particularly after a rain. The air is fresh and crisp and there is a slight tinge of woodsmoke drifting up from the village as our neighbors warm their homes at the beginning of the day. Different species of wood have distinctive smells. Occasionally, if the wind is just right, I swear I’ve smelled pancakes and bacon. mmmm

But, the look on his face didn’t indicate a pleasant smell.

Beyond the molasses of the feed can, the slightly musty smell of hay and the scent of damp wool and sheep cud, I didn’t sense anything unusual. He headed off to the house.

On my way out of the barn, I thought I smelled something, but it was vague and I was intent on finishing chores and getting back to the warm, dry house.

Then it hit me. The distinctive scent of “polecat”....

Ewww, the acrid smell of skunk spray hung in the air. (if you have never had the pleasure, “eau du polecat” could be best described if you imagine cleaning out an ancient ashtray with equally old, stale coffee…and you used a bit of ammonia. Delightful, not!  If it is very fresh and very close, it catches in the back of your throat and you even taste it slightly as you breathe. Ugh) But, thankfully, it seemed fairly faint and faraway. Figuring the smell was wafting up from Mbrk road where skunks are squished with some regularity, I went inside and informed the Boss that the mysterious smell had been identified. And, then I promptly forgot the entire incident.

It did seem slightly odd that neither of the dogs had been present at choretime. Ordinarily, they are making a nuisance of themselves, nosing our hands, looking to be petted prior to feeding. Although I could see them sleeping in the orchard, so I figured they had been on patrol all night and didn’t give them a great deal of thought.

But, what was that out there with them? Had Gus returned to his bad habit of eating plastic transplant trays? No...maybe it was a piece of firewood and he was starting “wood-henge” again.  Did you read  this one?

It wasn’t until I went out later for a walk that I realized the black thing in the orchard was a skunk. A very dead skunk. A very dead, very smelly skunk. The closer I got, the more apparent it became that this was the source of the morning “perfume”. And, it was far stinkier than we originally thought. Apparently the dogs’ elusiveness was due to their “slight embarrassment” of the fact that they were bloody and dirty (and more than a little smelly) from their nocturnal adventure.

Before he knew what happened, the Boss was volunteered for skunk removal.  Deciding how to best dispose of a dead skunk was something I simply couldn’t bring myself to face.  Even now, days later, the distinctive scent of polecat hangs in the air and surrounds at least one dog.


So, with that out of the way, the week began in earnest. You would think it could only get better...right?

However, it didn’t get better, in some ways, it got considerably worse. For various reasons, I will skip the details. But, we muddled through the unexpected, unpredicted and downright crappy stuff, and we did indeed endure. I guess that’s the main thing.

We got to spend some time with our kids, too.  Which, while it wasn’t really the plan, did have its good moments.

Both my daughters have been blessed with some amazing in-laws. When you can make a phonecall at 6:30 in the morning and have someone show up in mere minutes, you are blessed. When you have someone who will spend days balancing among the rafters in the dark and cold attic, rewiring your house, you are blessed. I have never had a support network like that. I am a just a bit jealous and more than a little impressed. I don’t know if they truly appreciate the gift that they have been given. But, I do. And, while it’s probably not my place to mention any of this...Vanessa...Wes...y’all are awesome!

Just when I thought I was done with the unexpected, a box of macaroni fell out of the pantry and “exploded” all over the kitchen. When the box hit the floor, the top popped open and elbow macaroni went everywhere. And, I do mean EVERYWHERE. Any other plans I may have had were on hold as I cleaned up the mess. And, since I was sweeping up noodles, I might as well clean/organize the pantry. Right? I mean, it looked like a disaster area and the door wouldn’t even shut correctly. I had been avoiding it for months. That unexpected job took me the entire morning. (I told you it was a disaster) But, the chickens enjoyed a feast of great variety...and the pantry door will once again close without difficulty. So, all’s well that ends well.

As I cleaned, I got to thinking about a conversation I had last weekend. While I waited for the Boss to complete his mad dash back to the hill to retrieve the forgotten eggs, I had the task of explaining the delay to the would-be egg customers. While they were all completely gracious and understanding, I found the entire situation extremely aggravating. As I discussed this with one customer-friend, she exclaimed...”I just can’t believe it. I never thought anything like that ever happened to you.  You all always seem to have it all together.”

And, I laughed and laughed.

Oh, my goodness. Have it together? Us? That’s truly hilarious. (my pantry disaster seemed to prove that point)

She seemed truly bewildered that I generally feel like we’re one step away from losing it entirely.

We started talking about perceptions. She’s known us for nearly twenty years and had apparently never seen the somewhat dis-organized, slightly frazzled us that is all too often a reality. She is not alone in her image of us, more than once someone has assumed that we are far different than I know us to be. And, I really can’t figure out why.

Is it because we (and I’m talking everybody here) try to put our best face forward? Is it the fault of Facebook and social media that it seems everyone else’s life is a highlight reel while we see only the bloopers and out-takes in our own lives? Or is it because we have been conditioned to keep things light and inconsequential? Are we just (as a society) really shallow?

I mean there are the “keepin’ it real” posts that share some of the less than perfect parts of life. And, believe me, I’ve posted plenty of those. Admittedly, reporting my failures and vulnerabilities doesn’t come easy. But, from time to time, the harsh realities of this life need telling.

But, there are struggles I never discuss with anyone (except the Boss...and he’s a captive audience and has had to endure repetitions for years) so, while it may seem like we “have it all together” there are a lot of times when I am truly falling all apart. I have written numerous things, only to shy away from posting them because they sound a little too dark and/or a little too filled with despair and angst. 2016 has seen me struggling more and writing far less. I guess I’m still waiting for things to turn around so I can share an upbeat message rather than being a complete and utter “Debbie Downer”.

If anything, that conversation made me aware that there is a whole lot going on out there of which we are unaware. Of which we are ALL unaware. 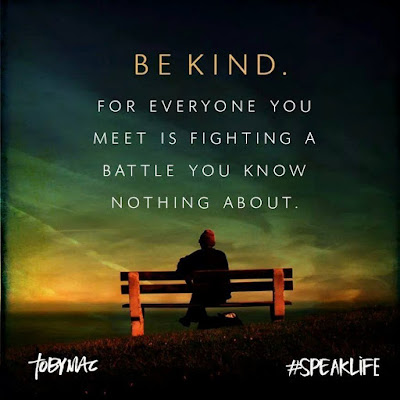 And, now I’m not real sure how to close this post. So, I reckon I’ll go with…

Here’s hoping you’re having a

And, remind you...if you look hard enough, you can almost always find a positive...

here's what I found...some beautiful greens that seem to be holding up to the cold...onions for next season...and a beautiful sunrise...ENJOY! 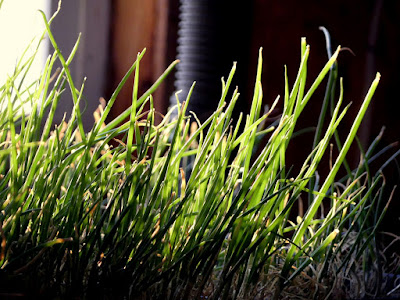 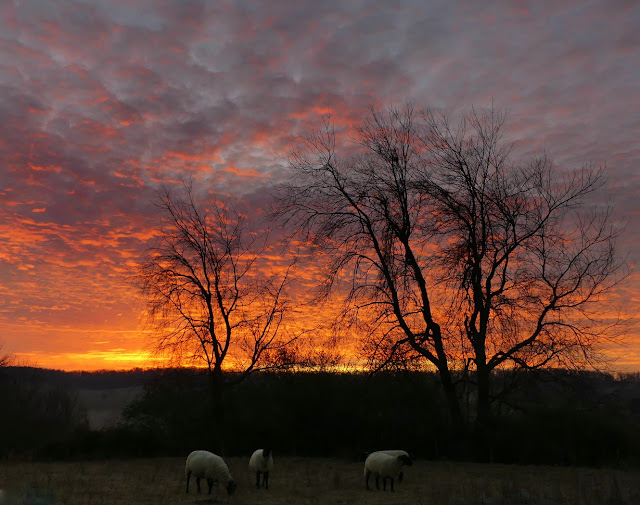