I truly enjoy the odd and random insights from our somewhat infrequent conversations with our agricultural neighbors. I almost always learn something. There is one fella I particularly like to listen to, partly because of his interesting stories and funny commentary on farming and life in general (he's a fellow shepherd)

EVERY conversation is bound to include his pronouncement that “y’all got the best damn sheep in Augusta County!”

Now, seriously, I will make no claims to the actual truth of this comment. And, I don’t honestly believe it. (there are far too many good shepherds with far too many good sheep---he even has sheep, lots of sheep) But, it makes me laugh. And, it does acknowledge that we’ve come a long way since we met this particular fella. The first time we met him, we were buying our first ram (and honestly didn’t have a clue about being shepherds) And, I knew that he KNEW sheep. Over the years, our own knowledge has increased (greatly) and our flock shows evidence of this.

However, he hasn’t been by lately.

Which is probably a good thing.

Because, I’m pretty sure if he saw “Beebi” he would change his mind.

She’s certainly in a class all by herself. (thankfully!)

Now, after 15+ years of shepherding, I can honestly say I know sheep. I understand the value of good genetics, I appreciate good confirmation and I know a thing or two about veterinarian care, too.

I owe a lot of my knowledge to spending hours and hours (days, weeks) listening to Blondie when she participated in the sheep showing circuit. Because when Blondie decides to do something, she gives it at least 150%. As mama/chauffeur/chaperone/photographer, I got dragged along to shows and farms and listened to conversations revolving around sheep on a constant 24/7 loop. That buckle at the beginning of this article is just part of the tangible evidence of Blondie's hard work and determination.

I have taken hundreds (thousands?) of photographs of lambs that are set for the show ring. Listened as she explained what the judge was looking for. Saw what the judge was looking for. Rejoiced with her. Lamented with her. Learned about sheep nutrition and vetting procedures. We’ve sheared sheep, shopped sheep and shared countless experiences in many a barn. And despite the fact that the sheep raised here on the hill are bound for the plate and not the show ring, she usually has something good to say about the flock when she comes home to visit.

Until she saw “Beebi”.

WHAT happened to that one?

No “best damn sheep” No “they look good, Mama!” …no visions of the show ring.

I guess that does need a little explanation.

One of the bottle babies has been a challenge ever since the beginning. (and if you’re wondering about her name…it’s a LONG story that goes back even further…read this THIS)

And, I can honestly say…I’ve never seen anything like this one before! (and hopefully I never will again)

She’s the smallest of triplets. Since her mother didn’t have enough milk for the lambs, I began supplementing them. What she lacked in size, she made up for in determination. She was always first to eat. She must have gotten chilled and contracted pneumonia. And then, all her wool fell out. Not just a little bit… ALL of it.

But, I’m getting ahead of myself here. 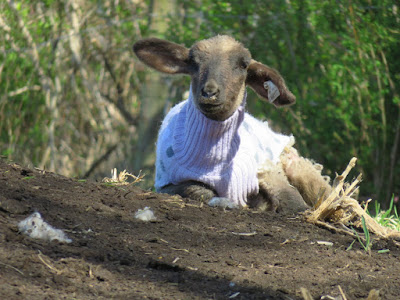 Pneumonia kills sheep fairly easily. The fact that Beebi is still alive is a testament to…well, honestly I don’t know what it’s testament to. I could claim good nursing and veterinary care on my part. But, I just did what I knew the veterinarian would suggest. And, honestly I expected her to die countless times over the past couple of months. So, it would be more than a little hypocritical to claim any sort of faith.

We have another shepherd friend who insists that if sheep could get hangnails, they would indeed die of the injury. I would heartily concur with this assessment. Sheep just aren’t known for their will to live.


After she started to recover from her bout with pneumonia, her wool began to fall out. Any sort of stress will make a sheep’s wool “break”. Generally, it is just a weak place in the fleece and impacts the spinning of the fiber more than anything. This time, it actually broke. And fell out. More and more wool fell out, until she looked like a cross between a close-clipped show lamb and a well-worn teddy bear. And a very skinny close-clipped show lamb at that. All her little rib bones stuck out. It was a disturbing sight.

At first, I put a little dog sweater on her. Without her wool, she was going to be cold. However, warmer weather was coming and I didn’t want to risk another bout with pneumonia by over-heating her. And, the sweater didn’t cover her entirely so there was going to be the issue of sunburn. My to-do list is far too long to add slathering sunscreen on a lamb to it on a daily basis. I would have to come up with something else.

While the Boss and I were in town, we stopped by the farm bureau with the intention of buying a lamb tube for her to wear. I was hoping that would camouflage the disturbing sight while protecting her delicate skin from the sun.

A lamb tube is made from lycra spandex, just like a bathing suit. And, like a bathing suit, it is meant to fit snugly. The idea is to keep the freshly shorn show lamb neat and tidy prior to its appearance in the ring. However, show lambs generally weigh anywhere from 90 to 150 pounds. (check out the local  Market Animal Show website)

The smallest tube I could find was for lambs 80 to 100 pounds. Since “Beebi” in all her wool-less glory weighed in at less than TWENTY pounds, I was going to have to do some alterations.

After taking an enormous tuck in the tube and cutting off a couple of inches from the neck, we were set.

However, even with the alterations, it was still far too big and it looked like she was wearing a little mini-dress as she raced down the path to the barn and the rest of the flock, the extra fabric flouncing in the breeze. That’s the kind of sight that keeps you humble. ‘cause there’s NO way that was a prize-winning specimen! Sometimes, "ya just gotta laugh"!

When the weather turned incredibly cold shortly thereafter, she was shivering so hard that she couldn’t even walk outside to eat with the other sheep. Even the heat lamps couldn’t keep her warm. Back on with the dog sweater. However, she had outgrown the smallest sweater…

At this point, forget even making the on-going joke about a prize winning specimen. This time she looked like a missionary barrel exploded! Although she seemed quite content in her pink leopard spots and royal blue argyle. Any serious shepherd would be embarrassed.  Believe me. I was.

I tried not to think about it. As a matter of fact, I never gave the neighbors a single thought when we turned the sheep in the front paddock. Although that changed when the veterinarian who lives behind us called to say she just had to check to make sure the sheep were okay.   Was one wearing a blanket? It wasn’t injured, was it?

It was just “Beebi” in her little hot-pink lamb tube.

But, she is growing well and will eventually fulfill her lambchop destiny here on the hill.

And, this is a sheep SUCCESS story! (those can be hard to come by)

I’m just hoping the one member of our sheep fanclub doesn't stop by anytime soon!