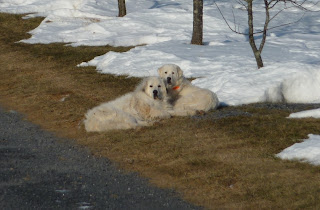 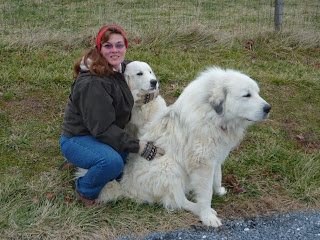 I have never thought of myself as a "dog person". I don't like the dog smell, the panting, the hair, the doggie footprints. So, WHAT am I doing with TWO of the smelliest, "doggiest" creatures around? I have no idea!

Several years ago, when checking for lambs in the cold, February night, I could hear the distant sound of coyotes. Several folks we knew had losses due to the coyotes, and Augusta County actually started paying a bounty for their removal. Our little sheep flock was in no imminent danger, but we began to think of guard animals.

After a failed llama attempt, we began considering the various breeds of guard dogs. We settled on the Great Pyrennees. Their non-aggressive nature toward people was the deciding factor. There weren't any available locally, but there was a breeder out in Highland County. Several weeks later, we found ourselves in possession of the cutest little ball of fur. This was Jed, and he was 12 weeks old. He grew and grew, rather like "Clifford the big, red dog". He topped out at a little over 100 pounds. With the exception of a very willful "personality" and drooling that threatened to flood the county, he is SO cool. After a couple of years, he began to develop some hip issues, and our daughter took her dog to live at her house. I thought Jed needed some company.

Enter Ellie Mae. Ellie is a different type of Pyr....she's short and stocky to Jed's majestic ranginess. We got her in trade from a friend when she was almost 7 months old. She was born on a goat farm, so the adjustment to sheep wasn't too difficult. She's been here three weeks, and fits right in. Her biggest fear is the charcoal grill. It has been suggested that perhaps she heard "hot dogs" and thought that SHE would be cooked. :)

I can honestly say that since we've had dogs, I have never seen a coyote. Of course, I had not seen one before we had dogs, either! The dogs add to the atmosphere of the farm. I find I like the companionship when I am working outside. They also add to the work of the farm....Ellie has a propensity for chewing up flower pots (not helpful at all!) Mostly, they lie around and wait for something to happen. Around here, that means they lie around a LOT!

Unlike true pets, farm dogs don't like travel. The only trips they take are to the vet, and that's never fun. We took Ellie for her shot yesterday, and she instantly became 75 pounds of dead weight. The DR took the front end, and I the rear....just to get a weight on her! Tom and I repeated the process to get her back in the vehichle. She seemed quite happy to get home to Jed and frolicking in the snow!